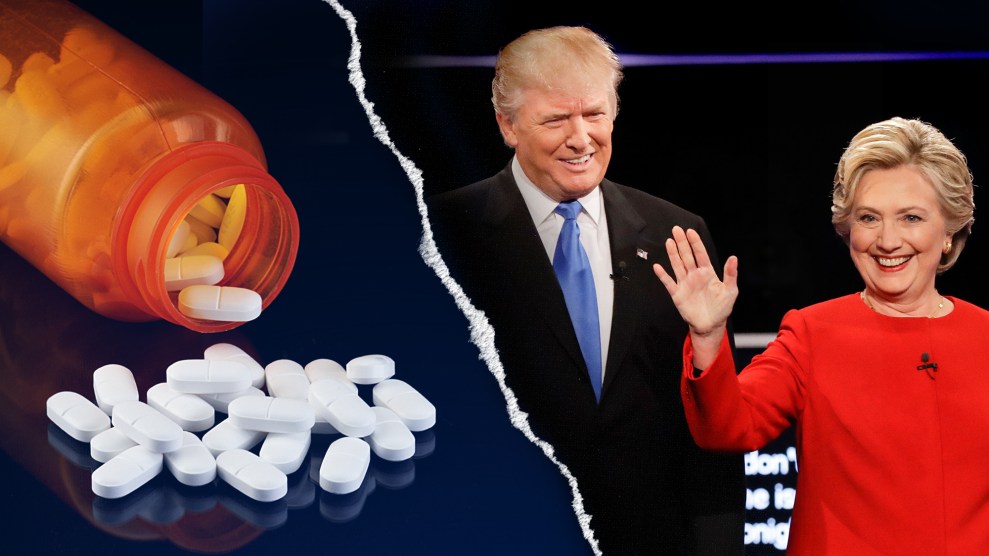 Drug overdoses are killing roughly the same number of people each year as HIV/AIDS did at the height of the epidemic—and far more than car accidents or gun violence. The majority of those overdoses are from opioids, a class of drugs including prescription painkillers, heroin, and fentanyl.

So how would the presidential candidates solve this monumental problem? Hillary Clinton presented a detailed initiative last year to spend $10 billion over the next decade on substance abuse and addiction. Donald Trump contends that building a wall on the Mexican border would solve the problem by stopping the flow of drugs into the country. Here’s what we know about the details of their plans so far:

The Initiative to Combat America’s Deadly Epidemic of Drug and Alcohol Addiction takes a multipronged approach to the epidemic, with $7.5 billion going toward a state-federal partnership in which the federal government would allocate $4 of funding for every $1 each state committed. An additional $2.5 billion would go toward drug treatment programs funded directly by the federal government. The goals of the plan include:

“The plan suggests that she’s got a good understanding of the problem,” says Dr. Andrew Kolodny, the chief medical officer to Phoenix House, a nonprofit organization that runs drug and alcohol treatment programs in 10 states, and a co-founder of Physicians for Responsible Opioid Prescribing. Kolodny applauded the commitment to $10 billion—particularly given the resistance to spending federal dollars on the issue so far. (Though addressing the opioid epidemic has garnered bipartisan support, Republicans blocked the $920 million Obama proposed in federal funding earlier this year.)

“It’s the first time in decades that a major-party presidential candidate has made a big deal about substance abuse,” says Keith Humphreys, a Stanford psychiatry professor and former drug policy adviser to the Obama administration. “There’s been a big federal under-response. This is the kind of thing that is really a billions-of-dollars kind of problem, like AIDS at the [peak of the epidemic].”

While Clinton has promised to curb opioid prescriptions and come down hard on overpricing of pharmaceutical companies, critics point out that she’s taken a lot of money from pharmaceutical companies. According to a Reuters investigation this June, Clinton “has taken more money from employees of America’s 15 biggest pharmaceuticals companies than all of the Republicans who attempted a run for the White House this year combined.” The pharmaceutical and health product industries have given $10.3 million to Clinton’s campaign committee and PACs working on her behalf, according to Open Secrets.

Trump: “Cut off the source, build a wall”

Trump often presents the overdose crisis as one sign that the country is descending into chaos:

Five people killed in Washington State by a Middle Eastern immigrant. Many people died this weekend in Ohio from drug overdoses. N.C. riots!

His main plan for dealing with the overdose epidemic? “Cut off the source, build a wall,” as he said at a town hall meeting in Ohio, a state ravaged by opioids. In New Hampshire, parents would “always” tell him that heroin was the state’s biggest problem, according to health news site STAT. “I’d say, ‘This doesn’t look like it’s a heroin-problem-type place.’ They’d say, ‘Mr. Trump, it is flowing across our southern border. It’s cheaper than candy. Our kids are being poisoned.'”

Heroin overdoses are taking over our children and others in the MIDWEST. Coming in from our southern border. We need strong border & WALL!

But there’s a big problem with that argument: When it comes to opioids, most Americans aren’t dying from heroin or illicit drugs coming from across the border. They’re dying from opioid painkillers prescribed and distributed within the United States.

As the chart below shows, opioid painkillers kill nearly twice as many people as heroin. “These are not pills being smuggled in from Mexico. It’s not illegal drug cartels that are the big problem,” says Kolodny. And then there’s the fact that “the idea that we can solve the problem by building a wall is ridiculous.”

The heroin overdose rate has indeed been on the rise, a trend that experts attribute to the increasing number of Americans addicted to opioid painkillers who switch to heroin as a cheaper, more potent fix. “There are so many people who are addicted that there’s a market for the product,” says Kolodny. “I don’t think they [the cartels] create the market.” Increasing access to treatment and decreasing prescriptions for opioid painkillers in the first place—rather than focusing on the heroin flow—should be the incoming president’s priorities, he says. “At the end of the day, if we’re going to make a dent in the problem, addiction treatment has to be easier to access than pills or heroin.”

Humphreys, the former Obama drug policy adviser, says that in the unlikely event that a wall is built, it would have a “small effect” on the epidemic.  A wall would likely increase the cost of heroin, but it wouldn’t prevent the drugs from coming in to begin with: “People still tunnel, people bribe officials, people—right now—take boats. There are airplanes.” He adds that other places—notably Southeast Asia—are known for heroin production. And fentanyl, an extraordinarily potent painkiller that has caused a rash of overdoses this year, is already being produced on the cheap in China and the United States.

Trump has briefly alluded to the need for treatment funding. “It’s very hard to get out of that addiction of heroin,” he said at the Ohio town hall. “That’s the other thing we’re going to do: We’re going to take all of these kids—and people, not just kids—that are totally addicted and they can’t break it. We’re going to work with them, we’re going to spend the money, we’re gonna get that habit broken.”

Whether or not this applies to painkillers as well—and what “spending the money” looks like, exactly—he has yet to specify.