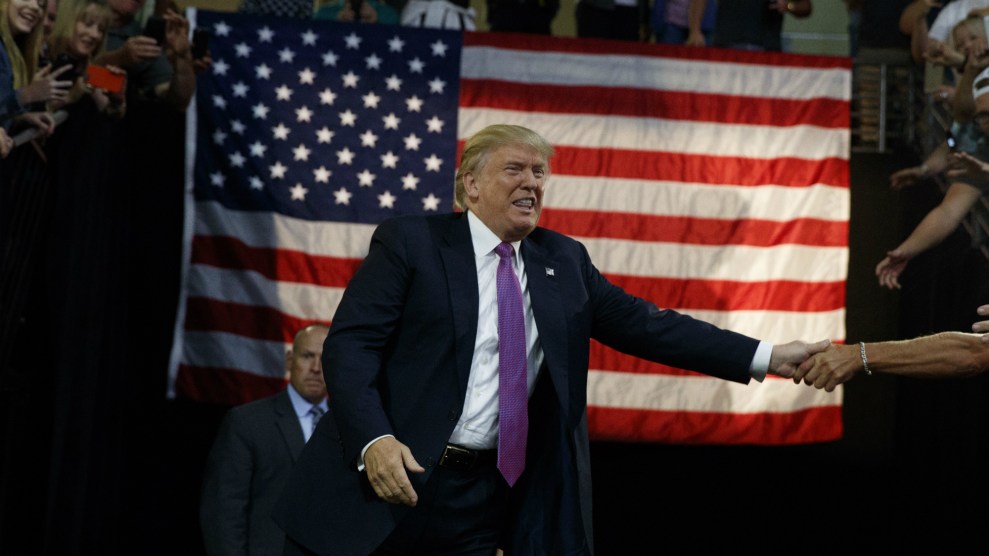 This spring, as Donald Trump battled Ted Cruz in the heated Republican primary campaign, the mogul was also tending to his day job, with his business empire staking a claim to some new corporate territory. On April 11—a day when media reports noted Trump had been oddly silent and out of sight following his recent defeat in the Wisconsin primary—a Trump-owned company applied for a trademark on a brand new hotel concept. It was dubbed “American Idea.”

According to the trademark filing made by DTTM Operations LLC, a Delaware-based company Trump set up in January to manage his trademarks, the GOP nominee was reserving “American Idea” for use in an unspecified hotel services, spa, and/or personal concierge business. Could it be that the candidate running under the banner of “Make America Great Again” was devising a plan to capitalize on Trump-style patriotism for a new hotel or chain of hotels with some sort of America theme? Was this Plan B? A way to convert his campaign into a commercial success, if voters fail to elect him the nation’s next CEO?

Hope Hicks, the Trump campaign spokeswoman, did not respond to a request for comment.

Something seems to be in the works for Trump and a new sort of hotel. Weeks after his company applied the American Idea trademark, it submitted another filing for a similar name. On May 5—the same day that Trump tweeted his appreciation for Hispanics based on his passion for taco bowls—DTTM Operations filed a trademark application “Idea Hotels.” And on July 1, DTTM Operations applied for a trademark on the word “Scion” for use in real estate management.

There’s no telling if these applications indicate anything concrete is in the works. In the past, Trump has trademarked a wide array of ideas that never progressed beyond the concept stage (see the “Trumptini” and the “GoTrump” travel agency). But Trump’s trademark applications can provide insight into his future endeavors. For example, in November 2012, long before he announced a presidential run, Trump trademarked his catchphrase, “Make America Great Again” for use with a political committee.

By the way, Melania Trump, too, has been busy trademarking. She has largely been out of sight since her speech at the GOP convention in Cleveland was found to be partially cribbed from Michelle Obama. But on  August 11, she applied for a trademark on her name for use in jewelry sales. She already has an existing line of jewelry (which she hawks on QVC), and it is unclear if the new trademark covers that or is for an expansion of her business. Whatever the case, perhaps she, too, is thinking of what to do after Election Day.