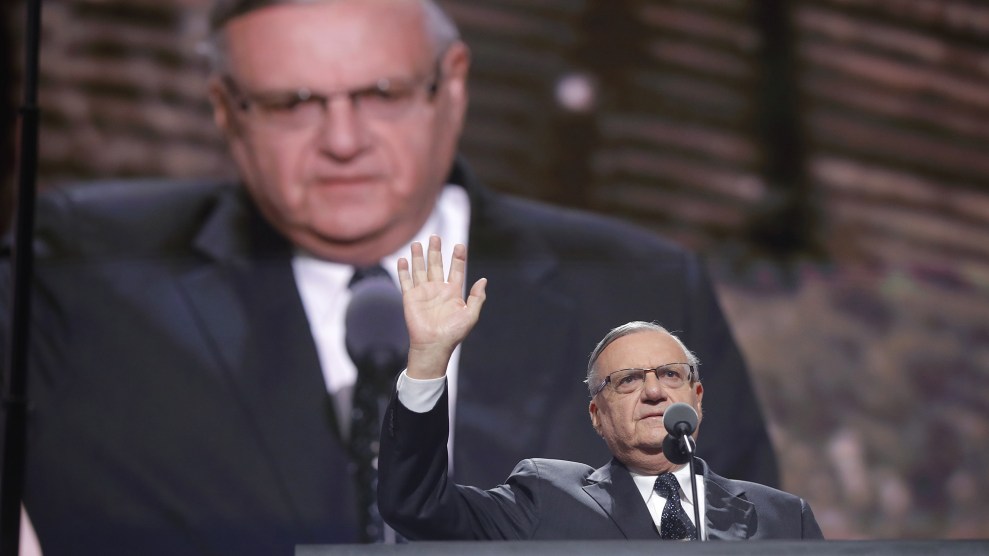 Joe Arpaio, the sheriff of Maricopa County, Arizona, walked onto the stage at the Republican National Convention in Cleveland, a few hours before Donald Trump was supposed to deliver his acceptance speech. Arpaio, a tough-on-illegal-immigration crusader, flashed a peace sign as the crowd roared its approval. Wearing an oversize black suit and a tie pin in the shape of a pistol, the 84-year-old sheriff said he’s spent 55 years in law enforcement, but his “most important mission has just begun: to help elect Donald Trump president of the United States.”

Trump is the only candidate strong enough to defend the nation from “terrorists coming over our border, infiltrating our communities and causing massive destruction and mayhem,” he said, adding that “criminals [are] penetrating our weak border security system and committing serious crime.”

Arpaio earned his spot on the RNC stage by styling himself as “America’s Toughest Sheriff,” who famously stops immigrants for no reason, dresses jail inmates in pink underwear, and houses the inmates in Korean War tents in the desert heat. He’s ridden his fame to six four-year terms as sheriff of the country’s fourth-biggest county.

Now running for his seventh term, he’s facing an opponent with better poll numbers whose message is getting a signal boost with $300,000 from liberal billionaire George Soros. He’s also having his own trouble with the law, with a looming criminal contempt referral for disobeying the orders of a federal judge who sought to restrain some of his anti-immigrant excesses. He’s saddled Maricopa County taxpayers with more than $140 million in settlement fees and court costs—the results of his sometimes overzealous approach to law enforcement.

Arpaio has been a national figure for years, but this year’s race underscores the wider political fight playing out across the country: Donald Trump’s xenophobic brand of populist bigotry has propelled the once-taboo and semi-fringe identity politics of white racists back into the mainstream conversation. For years Arpaio has been a leading national figure for fighting and criminalizing undocumented immigrants, and this race is drawing a lot of attention. Millions of dollars in out-of-state donations have poured in for Arpaio, but his challenger—retired Phoenix Police Sergeant Paul Penzone—has also drawn outside support, chiefly in the form of an independent expenditure committee funded solely by liberal financier George Soros.

Trump’s nomination could push the red state blue for the first time in a generation and motivate the state’s Hispanic voters to vote in greater numbers than ever before. A proposal to legalize recreational marijuana, and a minimum-wage ballot question could also drive younger Democratic-leaning voters to the polls. Republican Sen. John McCain’s tough challenge from Democratic Rep. Ann Kirkpatrick has enhanced on-the-ground Democratic organization across the state and won’t help Arpaio, nor will the sheriff’s ongoing “investigation” into President Barack Obama’s birth certificate.

He’s somewhat like me,” Arpaio told the Guardian , referring to Trump. “Or I’m like him. I don’t know which way it goes.”

On the other hand, Trump’s intense anti-immigrant rhetoric has galvanized many voters, and Arpaio has been that crowd’s hero for years. “He’s somewhat like me,” Arpaio told the Guardian, referring to Trump. “Or I’m like him. I don’t know which way it goes.” Whichever way it is, Arpaio is still incredibly popular among Republicans in Maricopa County. He easily won the Republican primary in August, defeating three other candidates. (The second-place finisher came in nearly 40 points behind Arpaio.)

So will this be Arpaio’s last election?

Arpaio’s challenger is Paul Penzone, a retired Phoenix police sergeant who came within six points of beating the sheriff (50.66 to 44.65) in 2012. That year, a third-party candidate named Mike Stauffer siphoned off crucial votes. Some Arizona Democrats assumed Stauffer had been recruited by Arpaio’s campaign to thwart a Penzone victory. They wondered again this year when third-party candidate Chad Lisk threw his hat into the ring, only to be blocked after failing to garner the requisite number of petition signatures.

“It’s apparent that the voters are tired of the nonsense they’ve seen from the sheriff the last several terms, and we feel confident with our chances,” said Penzone.

He says the 2012 race was closer than it looked because the percentage of the vote Arpaio received was “barely above the median.” He rattles off the problems: Arpaio has cost county taxpayers at least $72 million, and that’s from only one case related to profiling and harassing Latinos; he’s facing a referral from a federal judge for criminal contempt of court related to a racial profiling case filed in 2007; his lawyers hired an investigator to look into the wife of the judge who issued that order. Penzone is announced that he filed a defamation lawsuit against Arpaio after the sheriff ran an ad recycling overstated and exaggerated claims that Penzone assaulted his ex wife in 2003. “It’s [all] just a complete abuse of his authority,” Penzone says. “The voters are tired of it, and I’m tired of it.”

Chad Willems, Arpaio’s campaign manager, did not respond to several requests for comment. After the contempt referral, Willems told the Associated Press that the exorbitant legal fees were the fault of the American Civil Liberties Union, which brought the case, because the organization refused to settle, costing taxpayers millions in legal fees. “If Penzone wants to side with the ACLU on this issue, he can be our guest,” he said. He told reporters with Cronkite News at Arizona State University that polling casting doubt on Arpaio’s popularity is dead wrong, and that the Arpaio campaign’s internal polling suggests the incumbent will “heavily” defeat Penzone.

But Penzone’s political challenge isn’t Arpaio’s only problem. The sheriff could face criminal charges after US District Court Judge Murray Snow, appointed by George W. Bush, ruled August 19 that Arpaio and another senior sheriff’s deputy ignored court orders, lied to the court, and withheld information in a racial profiling case dating back to 2007. The case, Melendres v. Arpaio, was filed by a group of Latinos in Maricopa County targeted by sheriff’s deputies for illegal-immigration sweeps during traffic stops. In 2011, Snow ordered Arpaio and his deputies to quit detaining suspected undocumented immigrants who had not broken any state laws. In 2013, Snow ruled that Arpaio and his deputies had discriminated against Latinos and also that Arpaio had violated the 2011 order in part to bolster his popularity during the 2012 election.

In May this year, Snow ruled that Arpaio had continued to arbitrarily detain Latinos based solely on immigration suspicions and held him in civil contempt, which left the door open for a criminal contempt referral that took place on August 19. Now the US Department of Justice will determine whether to criminally charge Arpaio with contempt of court, a crime punishable with up to six months in prison. In the middle of all this, Arpaio’s attorneys hired a private investigator to investigate the judge’s wife after a tipster told Arpaio that Snow’s wife said that Snow wanted to get Arpaio out of office.

“This is really almost completely uncharted territory,” says Mel McDonald, a former US attorney who is representing Arpaio privately in the criminal case. McDonald says there isn’t a lot of precedent for Arpaio’s case, and he’s meeting with DOJ officials October 11 to figure out what the next steps will be. He says the DOJ can choose to pursue criminal charges, or it can decline to do so. Snow can then choose to appoint a special prosecutor to pursue the case.

Although Arpaio is paying for his legal defense in the criminal contempt case, the rest falls on the taxpayers of Maricopa County to the tune of $72 million, according to the Arizona Republic, which notes that in all, Arpaio has cost taxpayers $142 million in legal fees, settlements and court awards since 1993. Arpaio does have a massive war chest that dwarfs the approximately $540,000 Penzone has raised thus far. According to filings published by the county on Thursday, Arpaio has raised just more than $12 million, roughly three-fourths of which came from small donors in other states, according to the Associated Press’ August analysis.

Penzone also has support from out of state: Liberal financier George Soros has stepped in to help. Soros has pumped $3 million into local district attorney races in a half-dozen states over the last year with an eye toward reforming the criminal justice system, according to Politico, with millions of dollars going toward radio and television ads. In Arizona he donated $300,000, the total budget of Maricopa Strong, an independent expenditure committee not affiliated with the Penzone campaign, according to records filed with the county. “We’re looking to persuade voters who have some doubts about Arpaio because of his record of wasting taxpayer money on lawsuits and legal fees, and losing sight of his primary mission of enforcing the law and keeping the people of Maricopa County safe,” said a source close to Maricopa Strong.

Despite all this baggage, Arpaio still has a strong chance of extending his 23-year reign over Maricopa County. Berman, the political scientist, says pundits have been predicting a surge of Hispanic voter turnout for years—a prospect that could cripple state Republicans up and down the ballot—only for it to never materialize. He concedes that the marijuana initiative, the minimum-wage question, an organized Democratic effort in the Kirkpatrick race against McCain, and Donald Trump—let alone all of Arpaio’s legal issues and history of racial profiling and harassment—could put Penzone over the top.

But there are still many more Republican voters in Maricopa County than Democrats and independents (737,439 active Republicans, 577,885 Democrats, 743,456 others). Besides, he said, it’s Arpaio’s true believers who have kept him in office this long.

“Arpaio has got the Trump supporter type—he has the same kind of true believer behind him,” says Berman. “If he went to jail, they’d still elect him. He just has this following that thinks he can do no wrong, just like Trump.”