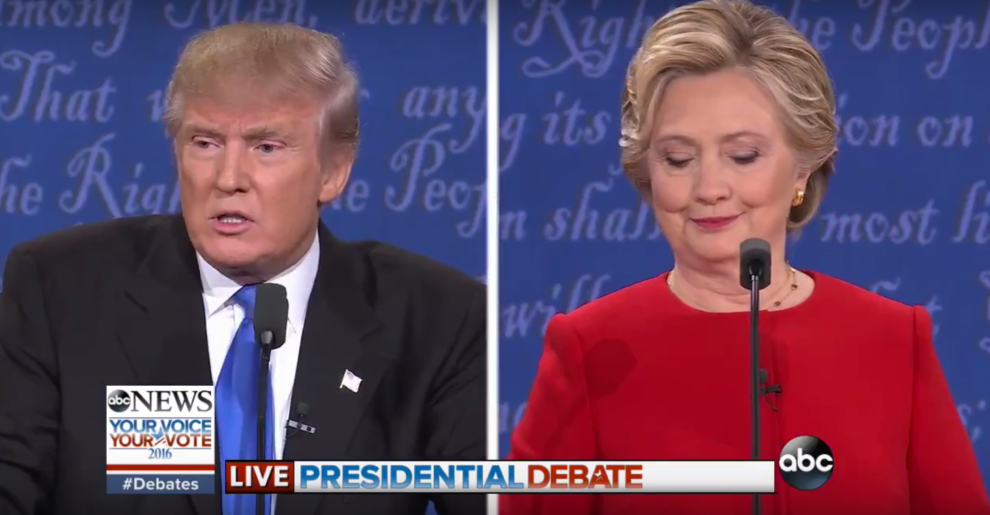 It finally happened. Hillary Clinton and Donald Trump met for the first highly anticipated presidential debate Monday night at Hofstra University on Long Island. The 90-minute debate, moderated by NBC’s Lester Holt, quickly turned tense and remained contentious throughout. Clinton was ready to go after Trump for his record on everything from his economic policy to his promotion of the birther conspiracy against President Barack Obama. Early in the debate, Trump came out hard against Clinton on trade and kept up the heat for the rest of the night, often interrupting and berating her as she spoke. Clinton easily held her ground—she even seemed to be enjoying his angriest moments—and got a few laughs at his expense.

Here are the must-see moments.

Did Donald Trump admit to rooting for the collapse of the housing sector? That’s what Hillary Clinton accused him of, as she had done previously, noting that Trump said he hoped the housing bubble would burst so he could make money off of it. Rather than deny this, Trump interjected, “That’s called business, by the way.”

Trump goes after Clinton over NAFTA and TPP. Trump launched a sustained attack on Clinton over trade deals. After a slow start, the debate quickly became contentious over the issue of trade. Trump accused Clinton of flip-flopping on the Trans-Pacific Partnership and noted that her husband had signed the North American Free Trade Agreement. But what made the exchange memorable was not the content so much as the tone, in which Trump continually interrupted Clinton with a barrage of angry questions.

Trump takes pride in paying no federal taxes. Clinton went directly after Trump’s refusal to release his tax returns—and Trump played right into her hands by implicitly confirming that he hasn’t always paid federal income taxes. “Maybe he doesn’t want the American people—all of you watching tonight—to know that he’s paid nothing in federal taxes,” Clinton said. “Because the only years that anybody’s ever seen were a couple of years he had to turn them over to state authorities when he was trying to get a casino license, and they showed he didn’t pay any federal income tax.”

Trump wouldn’t let that one go unchallenged. He jumped in to interrupt Clinton mid-statement. “That makes me smart,” Trump bragged about dodging his tax burden.

Trump calls for stop-and-frisk policing. In a segment of the debate devoted to racial healing, as moderator Lester Holt framed it, Trump chose to focus instead on “law and order” and pushed for a return of the stop-and-frisk policy formerly used in New York City. When Holt jumped in to point out that the policy—which involved police randomly stopping citizens without cause, and was shown to be discriminatory against African Americans and Latinos—had been ruled unconstitutional, Trump tossed aside the legal ruling. “No, you’re wrong,” Trump replied. “It went before a judge who was a very against-police judge.” When Holt again pushed back, noting that it’s been called a form of racial profiling, Trump again dismissed the moderator. “No, the argument is that we have to take the guns away from these people who have them and that are bad people and shouldn’t have them.”

When Clinton got a chance to respond, she said, “It’s really unfortunate that he paints such a dire, negative picture of black communities in our country.” Trump muttered under his breath, “Ugghhhh.”

Trump defends his birther lie. In a segment on race relations, Holt asked Trump to explain why he pushed the conspiracy for years that Obama was not born in the United States—even after Obama released his birth certificate in 2011. As he has in the past few weeks, Trump defended his actions and falsely accused Clinton’s 2008 primary campaign of starting the conspiracy. Obama “should have produced it a long time before,” Trump said. “I think I did a great job and a great service.”

Clinton took him on. “He tried to put the whole racist birther lie to bed,” she said, “but it can’t be dismissed that easily. He has really started his political activity based on this racist lie that our first black president was not an American citizen.”

Trump brags about his “winning temperament.” Clinton and many voters are critical of Trump’s temperament. Trump has no such qualms. In fact, he declared that he as a “winning temperament” and that his temperament may be his “strongest asset.” This came after a long rant in which he claimed that he had opposed the Iraq War. (As Holt pointed out, the record says otherwise.) Clinton got a laugh from the crowd when it was finally her turn to speak by letting out a sigh.

Clinton strikes back on questions about her “stamina.” Trump doubled down on his accusation that Clinton “doesn’t have the stamina” to be president. Clinton had a ready comeback: “Well, as soon as he travels to 112 countries and negotiates a peace deal, a cease fire, a release of dissidents, opening of new opportunities in nations around the world, or evens spends 11 hours testifying in front of a congressional committee, he can talk to me about stamina.”

Clinton goes after Trump for demeaning women’s looks. Holt asked Trump about his past statement that Clinton doesn’t have a presidential look. Trump denied having said that and instead talked about stamina. But Clinton pounced, seizing the moment to go after Trump’s record of insulting women and commenting derisively on their appearance. “He tried to switch form looks to stamina, but this is a man who has called women pigs, slobs, and dogs,” she said, “and someone who has said pregnancy is an inconvenience to employers. Who has said women don’t deserve equal pay unless they do as good of job as men. And one of the worst things he’s said, was about a woman in a beauty contest. He loves beauty contests, supporting them and hanging around them. and he called this woman Ms. Piggy. Then he called her Ms. Housekeeping, because she’s Latina.” Trump denied this, but it did happen.

Patrick Caldwell contributed to this report.