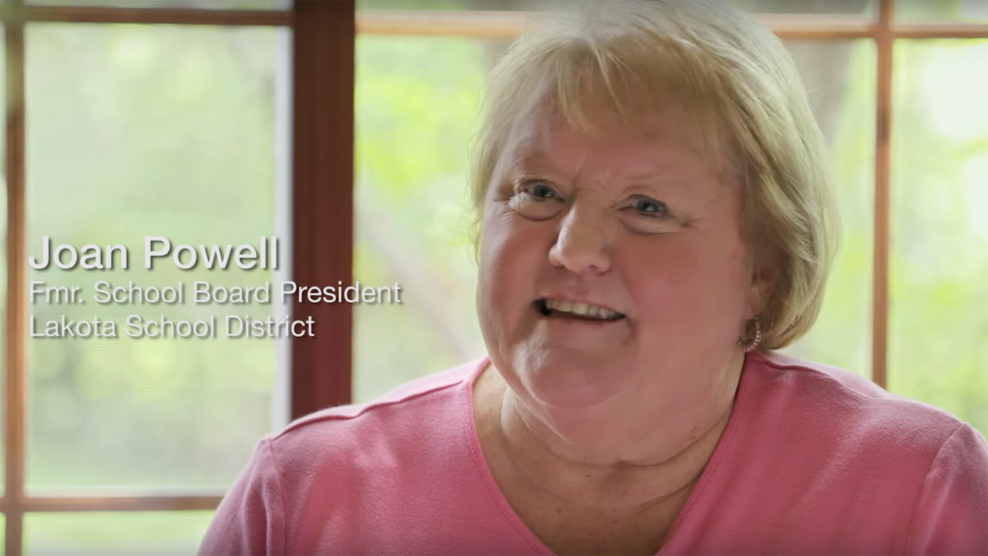 Residents of Butler County, Ohio, turned on their televisions on Wednesday to find an ad featuring one of their neighbors. “I think a lot of people are really struggling with” who to vote for, Joan Powell said on their screens, “because they’ve always been Republican and yet they see Donald Trump’s flaws.” Powell, a grandmother and former school board member in this Republican suburban county north of Cincinnati, expressed concern about the impact Trump would have on her six grandchildren. “When he says, ‘I could shoot someone on Fifth Avenue, nobody’d care,’ that’s no kind of role model for the children in this community or in this nation,” she said. “I’ve been a Republican for the last 50 years, but I could never vote for Donald Trump.”

The ad hits two familiar themes: the idea that Trump is an unsuitable role model for children—a message the Hillary Clinton campaign has pushed with its own ad this summer—and the Clinton campaign’s appeal to suburban Republican women, whom Democrats are hoping to peel away from Trump this cycle. What makes this ad different is Powell.

Or, more to the point, that the message is coming from a Republican neighbor. The ad is the first one aired this election cycle by Local Voices, a small Democratic super-PAC that uses the work of documentary filmmakers to produce hyperlocal ads. The ads, aired in specific towns and counties, each feature one person in the community speaking unscripted about why he or she cannot support Trump.

Since the Supreme Court opened the door to unlimited outside spending in 2010, well-funded super-PACs have redefined the political landscape by pouring hundreds of millions of dollars each election cycle into ads that reach voters across states or the country. By contrast, Local Voices thinks it can accomplish more by targeting fewer people and focusing on a key demographic this election: white, Republican-leaning, and largely blue-collar voters who can be dissuaded from supporting Trump.

A significant amount of political spending these days is aimed at boosting turnout among voters already likely to back a certain candidate, but Local Voices is taking the opposite tack, targeting persuadable Republicans. “It’s not necessarily a get-out-the-vote type of enterprise for us,” says Hirsch. “We see it as really trying to talk to people that are on the fence.” He says the most powerful ads feature subjects with influence in their communities, such as veterans, doctors, and small-business owners.

The group began this cycle with a pilot ad in Montana and hired the New York research firm maslansky + partners to test it. They found it outperformed traditional ads in the test, Hirsch says. “They saw other ads as the same old political attacks,” he says. “And for the voters, the inclusion of a local voice made the ad immediately stick out.”

The group is preparing to release several similar ads within the next two weeks. Three will run in the crucial state of Ohio—one in Warren County, another suburban Republican area near Cincinnati, and two in the Rust Belt portion of the state, where Trump has made inroads with blue-collar workers who have traditionally voted Democratic. The Rust Belt ads will feature a truck driver and an assembly line worker at the local General Motors plant who will speak to fellow blue-collar voters. The group is also preparing two spots in Republican-leaning Lee County, Florida. By the end of the month, it is planning to release one ad each in North Carolina, Pennsylvania, and Arizona.

In 2008 and 2012 combined, Local Voices claims to have reached 20 million viewers with its ads. This year, through geotargeted digital and local cable ad buys, it wants to double that by making 50 ads that will reach 40 million people. (The Butler County ad, which cost $15,000 to air, appeared on cable channels such as CNN, Fox News, MSNBC, Discovery, Lifetime, Bravo, and HGTV.)

Local Voices needs to raise $5 million to reach that many people—a modest goal relative to the $110 million that Priorities USA, the biggest pro-Clinton super-PAC, has raised so far this cycle. But the group is still a long way off, having raised only $300,000 so far—enough to produce more than 20 ads and make initial media buys in Ohio and Florida, according to Kate Reuterswärd, a spokeswoman for the group. In 2012, the group relied heavily on Rosemary Pritzker, whose family owns the Hyatt Hotel chain and whose cousin Penny Pritzker is US secretary of commerce, to fund much of its efforts. In 2012, she gave the group $750,000 in donations. Reuterswärd says Local Voices generally raises most of its money once donors see the work it has produced.

“We’re hoping that we’ve done this work,” says Hirsch, “and we’ve proved it and we’ve shown the impact and we’re out making this great work and that folks that are traditionally giving in big numbers to Priorities USA, that they might take a look at us and they might want to support this alternative approach.”

Correction: An earlier version of this article misspelled Hirsch’s name.