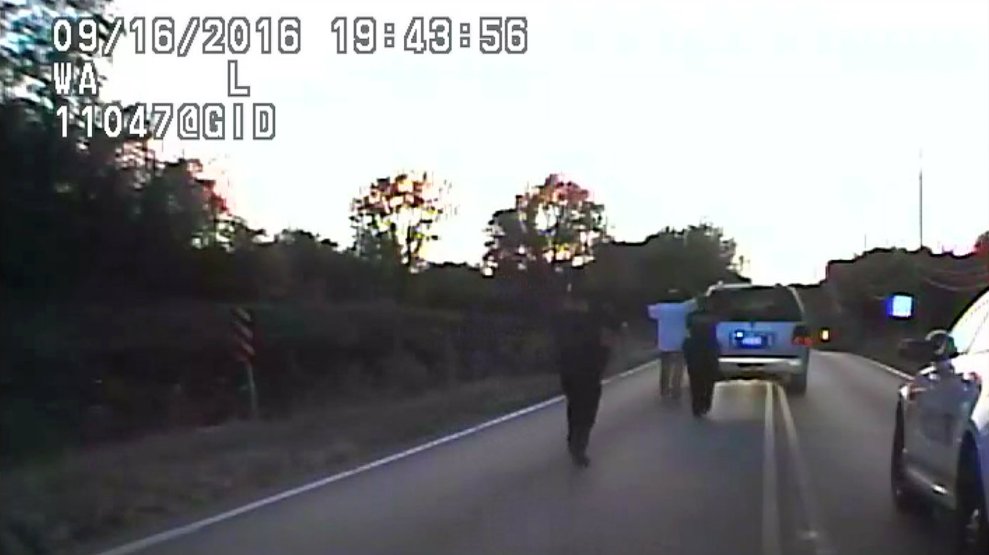 On Monday, police in Tulsa, Oklahoma, released footage from their fatal shooting of an unarmed black man last Friday. Terence Crutcher, a 40-year-old father of four, was shot by a Tulsa cop responding to a call about a car that Crutcher had seemingly abandoned in the middle of a road. The man was unarmed and, in most of the released footage, has his hands raised over his head.

The shooting incident, which Police Chief Chuck Jordan called “very disturbing” at a press conference Monday, sparked a swift response on social media and from the department itself, which promptly released videos of the incident from several perspectives and called on the Department of Justice to investigate. Tulsa mayor Dewey Bartlett assured the public that the city’s own investigation would be transparent. The fourth shooting by city police this year, according to Tulsa World, even got the attention of Hillary Clinton, who during a radio interview on Tuesday called it “unbearable.” Such incidents “must be intolerable,” she added. Crutcher’s family are rallying for criminal charges against the officer who shot him. Here’s what we know so far:

What the footage shows: A video shot from a police helicopter shows Crutcher walking away from an officer—identified Monday as Betty Shelby—with his hands in the air. Crutcher approaches his car, and a second police officer arrives on the scene. Shelby and the second officer follow Crutcher with their weapons drawn and pointed at his back. They are joined by two more officers. When Crutcher reaches his car, he appears to lower his right arm. At that point, the camera angle changes and Crutcher is obscured by the vehicle. He falls to the ground shortly thereafter. At one point, as Crutcher walks toward his car, an officer, apparently in the helicopter, can he heard saying that Crutcher is “still walking” and not following commands.

One video shows that the officers waited more than two minutes before administering any first aid.

“Time for Taser, I think,” says another officer.

“I got a feeling that’s about to happen,” the first cop replies.

Crutcher, he adds, “looks like a bad dude, too. Could be on something.”

A second officer had fired his Taser just before Crutcher was shot, according to the Tulsa chief.

Dash-cam footage from a cruiser also shows Crutcher walking toward his vehicle, hands up. When he nears the vehicle, four officers crowd around him. Seconds later he falls to the ground, but it’s unclear exactly what preceded that. The video shows that the officers waited more than two minutes before administering any first aid. One officer appears to check Crutcher’s pockets first.

Officer Shelby, 42, is a four-year veteran of the Tulsa police force and a field trainer. She had previously worked with the Tulsa Sheriff’s Office for four years. Shelby and the officer who fired his Taser have been placed on paid administrative leave. In addition to the videos, the Tulsa Police Department also released audio from 911 calls placed by observers.

The official account: According to Chief Jordan, Tulsa police received two calls around 7:30 Friday evening concerning a car sitting in the middle of the road with its driver’s side door open and the engine running. One caller told dispatchers that “a man ran from the vehicle saying ‘It’s going to blow,'” Jordan said. Officer Shelby responded while en route to another call. Crutcher was unarmed, and police found no weapon in his vehicle, Jordan said.

A vial of PCP was found in Crutcher’s vehicle, but police did not say whether he had the drug in his system.

As Shelby’s attorney, Scott Wood, described the incident to Tulsa World, no one was around when Shelby arrived, “so she isn’t really sure what is going on.” At some point, Shelby attempted to engage Crutcher, who ignored her questions and commands that he not reach toward his pocket, Wood said. Shelby, who according to her lawyer is an expert at detecting when people are on drugs, thought Crutcher was behaving like someone using PCP. She drew her gun after Crutcher began to walk toward his vehicle and put his hand in his left pocket. (Tulsa police confirmed to Tulsa World that a vial of PCP was found in Crutcher’s vehicle, but did not say whether Crutcher had the drug in his system.)

Shelby “cleared” the right side of Crutcher’s car, and when she started toward the other side to check it, Crutcher approached her. (None of this is in the videos, which show that Shelby already had her weapon out as Crutcher approached his vehicle with his hands up.) When her backup arrived, Woods said, the responding officer drew his Taser because he perceived Crutcher’s movements as threatening. But it was a second cop who fired his Taser at Crutcher just before Shelby fired her gun.

Shelby’s husband, also a police officer, was in the helicopter that recorded one of the videos of Crutcher’s shooting, a Tulsa police spokesperson told the World. He was not the cop who called Crutcher a “bad dude,” the spokesperson said.

The family’s take: On Monday, Crutcher’s twin sister Tiffany said her brother was on his way home from classes at his community college when he had car trouble and encountered police. She called for criminal charges to be filed against Officer Shelby and asked that anyone protesting her brother’s killing keep things peaceful. Attorneys for Crutcher’s family called the shooting unjustified, saying that Crutcher could not have reached into his car because video shows the window was closed when he was shot and that his hands were raised, and that he did not appear to have a weapon, make any sudden movements, or threaten police—nor was he a criminal suspect. One attorney, David Riggs, said Crutcher was “someone needing help from either a mental or a medical condition—perhaps intoxicated,” when he was shot, “but in a condition needing assistance of the police.” Tiffany, Crutcher’s sister, took issue with the helicopter officer’s characterization of her brother: “That big ‘bad dude’ was a father. That big ‘bad dude’ was a son,” she said. “I want everybody to know: That big ‘bad dude,’ his life mattered.”