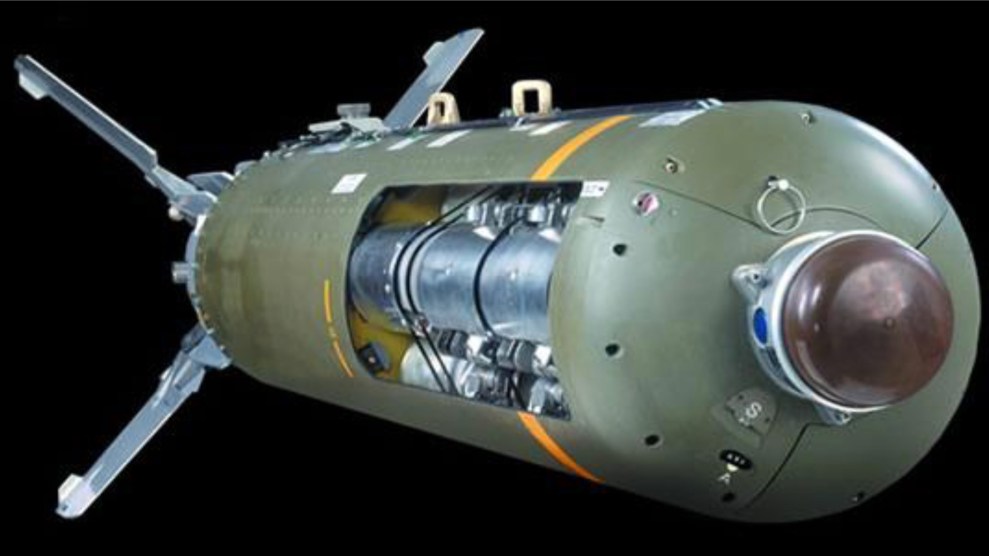 The CBU-105 Sensor Fuzed Weapon first saw combat in the early months of Operation Iraqi Freedom. On April 2, 2003, an Iraqi tank column was advancing toward a Marine unit in southwest Baghdad. The marines had no tank support, but a new weapon was on its way. A B-52 bomber dropped two CBU-105 cluster bombs aimed at the leading edge of the Iraqi armor. “The entire first third of the Iraqi tank column was decimated,” said Air Force Col. James Knox. “The Iraqis in the back of the tank column immediately stopped and surrendered to the Marines.”

It was the perfect unveiling for the CBU-105, which quickly became the United States’ go-to anti-armored vehicle munition. But in the past decade, cluster munitions have become known not for deadly accuracy but indiscriminate carnage and civilian casualties. And now, after sustained international pressure, the internationally-banned weapon will no longer be made in the United States—at least for now.

On Tuesday, Textron Manufacturing Systems announced that it is ceasing production of the controversial CBU-105, citing reduced orders, a volatile political environment, and international weapons treaties that negatively affect the “ownability” of its shares. “Historically, sensor-fuzed weapon sales have relied on foreign military and direct commercial international customers for which both executive branch and congressional approval is required,” Textron said in a filing with the Securities and Exchange Commission. “The current political environment has made it difficult to obtain these approvals.”

Civilians were 97 percent of cluster-bomb casualties in 2015. More than a third were children.

The announcement comes three months after Textron’s CEO defended the weapon in a Providence Journal op-ed amid ongoing protests at the company’s Rhode Island headquarters. Around the same time, the Obama Administration blocked the transfer of cluster bombs to Saudi Arabia in a rare display of unease over the growing civilian death toll in the Saudi Arabia-led war against Shiite rebels in Yemen.

Cluster bombs, which are dropped from aircraft or launched from the ground, contain submunitions, or “bomblets,” that spread over a wide area before exploding. They’re intended to target military convoys or installations, but can kill or injure anyone who happens to be nearby. Bomblets that fail to detonate can become de facto landmines, laying in wait for anyone unfortunate enough to come across them. The CBU-105 cluster bomb contains 10 canisters, each of which disperses 4 explosive bomblets, called “skeets,” which can spread out over an area the size of a football field before detonating.

In 2008, the United States came up with a policy to end its use and export of all cluster munitions by 2018 except for those whose failure rates are less than one percent. In lab settings, the CBU-105 meets the criteria, blowing up 99 percent of the time they’re deployed. But many observers and activists question whether that’s been the case on the battlefield after documenting numerous cases of unexploded skeets.

Morgan Stritzinger, a Textron spokesperson, defended the CBU-105 in a statement to Mother Jones. “The [Sensor Fuzed Weapon] is a smart, reliable air-to-ground weapon that is in full compliance with the US Defense Department policy and current law,” she wrote.

Under the 2008 Convention on Cluster Munitions, more than 100 countries have banned the CBU-105. Yet major arms-supplying nations, including United States and Russia, have refused to sign the treaty. Former Defense Secretary Robert M. Gates stated that eliminating cluster munitions from US stockpiles “would put the lives of our soldiers and those of our coalition partners at risk.” The last known time the United States used cluster bombs was in 2009, when it sent a Tomahawk missile armed with cluster bombs at an alleged Al Qaeda training camp in Yemen. The attack killed 35 women and children and as many 14 militants.

“We still have napalm bombs. I have a feeling these are things we’ll hang on to.”

“Textron has taken the right decision to discontinue its production of sensor fuzed weapons, which are prohibited by the 2008 Convention on Cluster Munitions,” Mary Wareham, the arms advocacy director at Human Rights Watch told Mother Jones in an e-mail. “This decision now clears the path for the administration and Congress to work together to permanently end US production, transfer, and use of all cluster munitions. Such steps would help bring the US into alignment with the international ban treaty and enable it to join.”

How likely that is remains to be seen. This week, states parties and advocates meet in Geneva for the Meeting of States Parties to the Convention on Cluster Munitions. But as former Navy explosive ordnance disposal officer turned public radio reporter John Ismay notes, the United States doesn’t have the best track record when it comes to arms treaties. “We haven’t signed the land mine treaty. We still have nuclear weapons. We still have napalm bombs in the inventory,” he says. “I have a feeling these are things we’ll hang on to.”

Plus, they’re still legal under US law. While Textron Systems is ending its cluster bomb program, the Pentagon could turn to a different manufacturer. Or Textron may be willing to license its technology to other defense contractors. On that point, the company did not immediately respond to a request for comment.