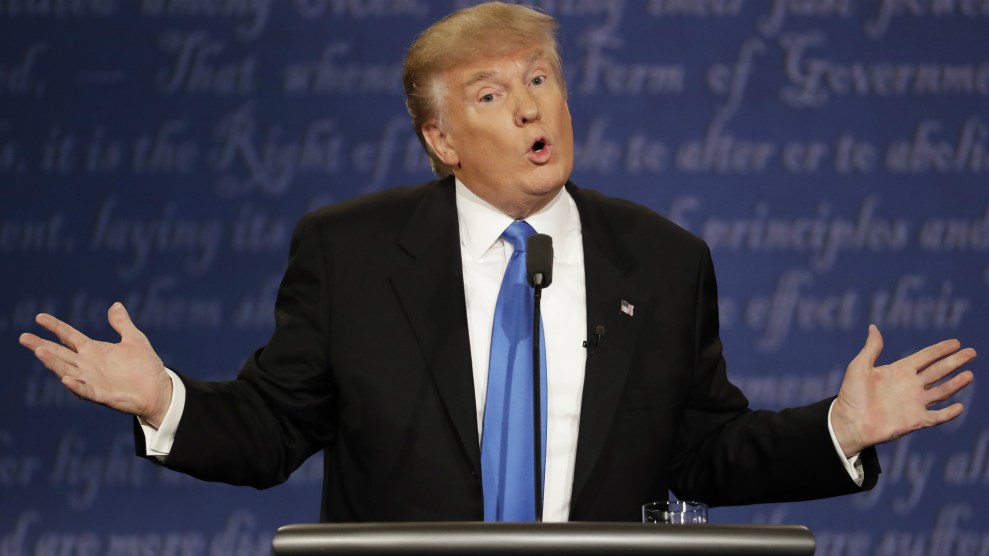 Deutsche Bank is in deep trouble. Its stock price has plummeted in recent days after the Justice Department demanded the gigantic German bank pay $14 billion to settle claims regarding its sale of bad mortgage-backed securities in the the run-up to the 2008 financial crisis. The bank’s shares fell to a new low on Tuesday over reports it might be seeking a bailout from the German government—which Deutsche Bank has denied. The crisis has exposed the fragile state of one of the world’s largest banks, but it also highlights a potential massive conflict of interest for Donald Trump.

In the past few years, Trump obtained $364 million in loans from Deutsche bank via four mortgages on three of his prized properties: Miami’s Doral National golf course, Chicago’s Trump International Hotel and Tower, and the newly opened Trump International Hotel in Washington, DC, a few blocks from the White House. A foreign entity holding so much of Trump’s debt—financial leverage that could affect the decision-making of a future commander in chief—has raised alarms among ethics watchdogs. But with Deutsche Bank floundering, the possible conflicts posed by Trump’s loans are compounding.

The financial health of Deutsche Bank is important for Trump’s corporate empire. Because of Trump’s history of failed projects and repeated bankruptcies, many of the world’s top banks have long stopped doing business with him. Deutsche Bank was one of the only major banks—perhaps the only—that would work with him, and their relationship has been rocky. Trump wore out his welcome with Deutsche Bank’s corporate banking arm in 2008, when he attempted to get out of paying $40 million he personally owed the bank after his company failed to make a payment deadline on a larger $640 million loan for his Chicago project. But Trump has maintained his relationship with Deutsche’s so-called “private bank”—an arm of the bank that caters to wealthy people and has more flexibility in its lending standards than the corporate side. The four loans Trump currently has with Deutsche Bank are each from the private bank, a Deutsche Bank official told Mother Jones.

Deutsche Bank has vowed to fight the US government over the hefty fine it is threatening to impose. The bank has said it is prepared to pay no more than $2 billion or $3 billion and noted in a statement last week that it has “no intent to settle these potential civil claims anywhere near the number cited.” Settlement negotiations are expected to take months, raising the possibility that Trump might be in the White House when a final decision is made. In an unprecedented face-off between a foreign bank and an administration led by a man deeply in debt to that bank, how would Trump balance the public interest with his private interests? Could American taxpayers be assured that a Trump administration would aggressively seek the maximum penalty against a lender that played a role in tanking the economy in 2008? Or would Deutsche Bank receive special consideration or favorable terms because of its ties to—or leverage over—Trump?

The news media has paid attention to the debt Trump, via partnerships, owes a Chinese bank. But Trump’s relationship with Deutsche Bank has yet to receive much scrutiny. And if Deutsche Bank continues to falter, there is the possibility that it may need to sell off loans, perhaps including the Trump loans. It’s hard to imagine a more staggering conflict of interest than a potential or sitting president’s debts being placed on the global market. What individuals or financial institutions here or abroad might buy them? Meanwhile, Trump has offered no firm explanation for how he would separate himself from his businesses—or his debts—if elected president.