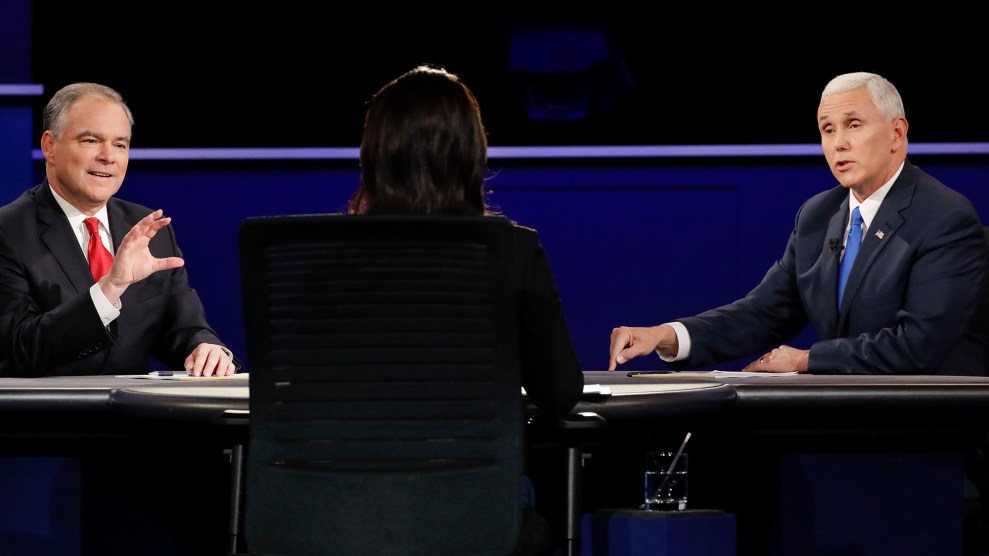 In a debate that was expected to have none of the fireworks of last week’s presidential face-off, the two vice presidential nominees embraced their attack-dog roles Tuesday in a sparring match that was less about the men on stage than about Donald Trump.

Democratic Sen. Tim Kaine of Virginia used the debate in his home state to slam Trump repeatedly over his refusal to release his tax returns and his surprising comments about nuclear proliferation. Republican Gov. Mike Pence of Indiana, in turn, tried to dodge most of the attacks Kaine lobbed his way and used them to accuse Kaine of running an “insult-driven” campaign. Pence was also able to get in a few swipes at Hillary Clinton.

It was a messy, chaotic affair for two vice presidential hopefuls, both thought to be more mellow than their running mates. The two candidates often talked over each other during the debate—and over the moderator, CBS News’ Elaine Quijano, who had a hard time holding Kaine and Pence to the allotted time and subject matter for each question.

Here are the best moments from the combative debate:

Following a New York Times report suggesting that Trump might not have paid any federal income taxes for nearly two decades by claiming $913 million in losses on his tax returns in 1995, Pence defended his running mate. “Donald Trump is a businessman, not a career politician,” Pence said. “He actually built a business. He faced some pretty tough times 20 years ago. His tax returns—that showed he went through a very difficult time but he used the tax code just the way it’s supposed to be used and he did it brilliantly.”

Kaine went hard after Trump for not releasing his tax returns. He recalled that Trump promised back in 2014 that he would release his returns if he ran for president, and he said Trump broke that promise. Just as Pence shared his tax returns with Trump as part of the vetting process to be his running mate, Kaine said, Trump should share his returns with the American people as he runs for the job of president.

Throughout the debate, Pence accused Kaine and Clinton of running an “insult-driven campaign.” “I have to tell you, I was listening to the avalanche of insults coming out of Sen. Kaine,” Pence said early in the debate. What had Kaine said that had so offended Pence? The Democratic candidate had just ticked off a litany of statements that Trump had made over the course of the campaign. Pence used this to bring up Clinton’s comment that half of Trump’s supporters are in a “basket of deplorables.”

When Pence noted Clinton’s “basket of deplorables” comments, Kaine said she had apologized for how she phrased that comment. (She apologized for exaggerating and saying the “deplorables” made up “half” of Trump’s supporters.) He went on to name a long list of insults that Trump has spewed since starting his campaign but not apologized for and said, “You will look in vain to see Donald Trump ever taking responsibility for anybody and apologizing.”

Midway through the debate, Kaine rattled off a list of Trump’s most controversial foreign policy ideas, from his questioning of the NATO treaty to his suggestions that the United States would be better off if more countries had nuclear weapons. But the best zinger came when Kaine listed the figures who would be carved into Trump’s “personal Mount Rushmore”: Vladimir Putin, Kim Jong-un, Moammar Gadhafi, and Saddam Hussein.

Kaine criticized Trump for his connections to Russian oligarchs and took on Pence for praising Putin as a “stronger leader” than President Barack Obama. For this, Kaine suggested, Pence might need to retake fifth-grade civics.

Pence declined many opportunities to defend Trump’s record against Kaine’s onslaught of attacks throughout the night, but he finally backed his running mate up when it came to Trump’s charitable foundation. The Trump Foundation, Pence claimed, “gives almost every cent to charitable causes”—a statement that has been proved false time and again through dogged reporting from the Washington Post. Trump has used his foundation to send an illegal political contribution to the attorney general of Florida, to pay off legal fees incurred by his businesses, and to purchase portraits of himself. The foundation is currently being investigated by the New York attorney general.

Tim Kaine and Mike Pence had this exchange about The Trump Organization and Trump Foundation during #VPDebate https://t.co/XNZr0CH5wk

Pence and Kaine went toe-to-toe on the issue of abortion. Kaine said Trump and Pence want to see Roe v. Wade repealed, resulting in laws that punish women for seeking abortions. Kaine also seized on a comment Trump made early in the campaign when he said women who seek an abortion should be punished. (Trump’s campaign later walked back that comment.) Pence responded that he and Trump would not condone punishing women for abortion and defended Trump’s past comments by noting that Trump isn’t a “polished politician” like Clinton and Kaine.