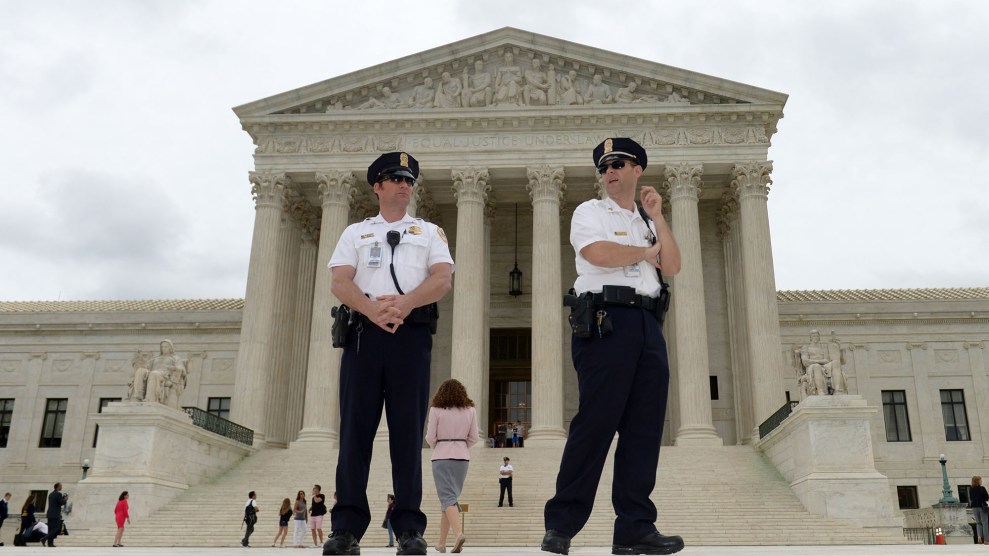 The presidential election could determine the ideology of the Supreme Court for a generation—and that’s putting some Republicans in a bind.

Some, like former Republican House Speaker John Boehner, are supporting Donald Trump solely on the basis of the Supreme Court. “The only thing that really matters over the next four years or eight years is who is going to appoint the next Supreme Court nominees,” he said recently. Trump knows this is one of his biggest selling points to conservatives. “I am looking to appoint judges very much in the mold of Justice [Antonin] Scalia,” he said at the second presidential debate earlier this month. “People that will respect the Constitution of the United States.”

But for conservative and libertarian legal scholars who have dedicated their careers to an interpretation of the Constitution that promotes limited government, Trump presents a conundrum. On the one hand, he promises to appoint justices like Scalia, whom they generally admire. On the other hand, if his campaign is any indication, a President Trump would trample this same vision of the Constitution with his authoritarian tendencies, including his policies against the freedom of the press and in favor of banning all Muslims from entering the United States. So is a Trump presidency worth supporting for the sake of Trump Supreme Court appointments?

For 29 “originalist” legal scholars, the answer is no. Originalists, such as Scalia and Justice Clarence Thomas, believe judges should interpret the Constitution as it was intended when written, rather than as a living, changing document. On Monday, the group released a letter titled “Originalists Against Trump,” which laid out their reasons for opposing the Republican nominee. “Many Americans still support Trump in the belief that he will protect the Constitution,” the letter states. “We understand that belief, but we do not share it.”

The letter addresses the issue of the Supreme Court, stating, “We also understand the argument that Trump will nominate qualified judicial candidates.” But the scholars add, “We do not trust him to do so. More importantly, we do not trust him to respect constitutional limits in the rest of his conduct in office, of which judicial nominations are only one part.”

Many of the most prominent conservative and libertarian legal scholars signed the letter, including Steven Calabresi, who co-founded the Federalist Society, a conservative legal group. “If there is one person who in a certain sense typifies sort of the average Federalist Society member, it’s hard to find someone who typifies it better than Steve Calabresi,” says Ilya Somin, a libertarian professor at George Mason’s Antonin Scalia Law School, who also signed the letter. Another signatory to the letter, law professor Jonathan Adler, is known as the legal mind behind the latest major legal challenge to Obamacare.

“The Supreme Court and the legal system have been one of the main arguments for holding one’s nose and voting Trump,” says Stephen Sachs, a Duke University law professor and one of the scholars who organized the letter. “I think it’s important that people who feel that there are real problems with that argument speak up and say so. And I think that it was important that it come from a group of people who were committed to the original Constitution and to make clear that that is part of the ground of our objection.”

Sachs was pleased that he was able to recruit legal heavyweights such as Calabresi to sign the letter. As a registered Republican who supported Marco Rubio in the primary, Sachs says he is willing to cast a strategic vote for Hillary Clinton if the polls in his home state of North Carolina—a swing state—show a close race.

To win over reluctant Republicans, the Trump campaign has put out a list of conservative lawyers whom Trump would consider nominating to the Supreme Court. But that list, which helped assuage some conservatives, isn’t convincing to Sachs and the other signers of his letter.

Somin, of George Mason University, does not buy the idea that Trump’s list of conservative potential justices will be enough to protect the Constitution from a Trump presidency. In fact, Somin has been using his platform at the Washington Post libertarian legal blog, the Volokh Conspiracy, to try to convince his peers to oppose Trump. As Somin explains, the conservative and libertarian legal world divides into three camps on the issue of whether to support Trump. The first camp believes that Trump is the lesser of two evils, based largely on his potential Supreme Court appointments. The second says Trump may make preferable Supreme Court appointments, but that this is outweighed by many other objectionable aspects of Trump’s politics. The third camp–where Somin resides—believes that Trump would actually be worse for originalism in the medium and long term than Clinton.

Somin questions whether Trump would actually appoint the originalist judges he has proposed. Trump’s promised Supreme Court appointments seem to run contrary to elements of his agenda—which is why Somin believes Trump might abandon his list and pick justices more friendly to his policies. “He has a long list of constitutionally dubious policies he wants to promote,” Somin says. “So presidents very rarely if ever appoint Supreme Court justices who are likely to vote against important parts of their own agenda, and it seems to me unlikely that Trump would be more eager to curb his own powers than other presidents are. In fact, rather the contrary.”

Beyond judicial appointments, Somin believes a Trump presidency would do more damage to the originalist project than a Clinton presidency would. His argument is simple: If Trump becomes president, he will move the Republican Party in the direction of big government and populism. If the GOP stops being the party of limited government, there will be no party left to appoint originalist judges in the future. “Much better to lose one or two or even three Supreme Court justices than to permanently lose one of the two major parties to the kind of ideology that Trump promotes,” he says. “Parties try to appoint justices who are at least roughly in accordance with their broader agenda. And if the broader agenda of the Republican Party moved toward big-government nationalism, which is where Trump wants to move it, then over time you will get Supreme Court justices” who share that view.

Somin would like to cast a vote for libertarian Gary Johnson on Election Day. But if the polls in his home state of Virginia are close, he is willing, like Sachs, to cast a strategic vote for Clinton—who would be sure to appoint justices with a constitutional interpretation antithetical to Somin’s, but who at least has the advantage of not being Donald Trump.