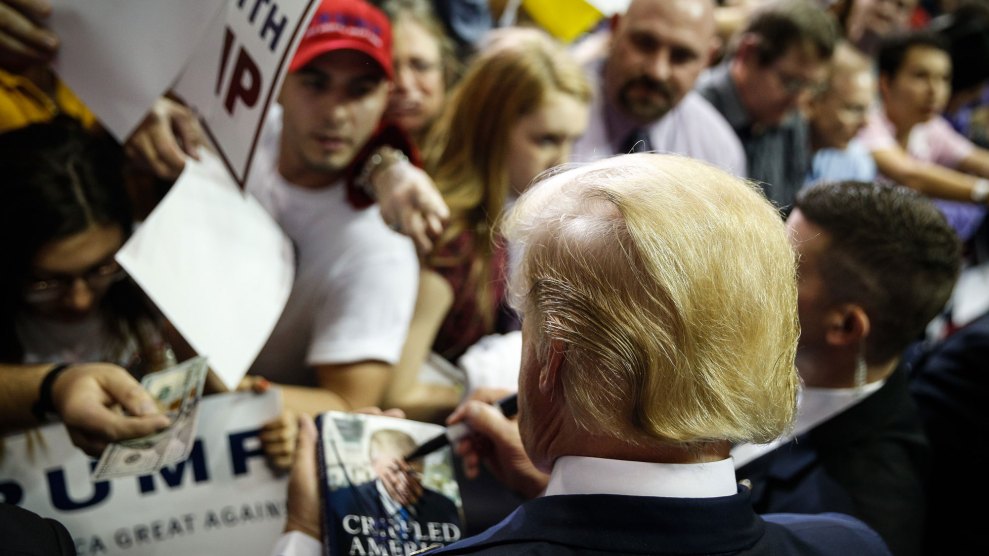 Donald Trump supporters got an unexpected welcome as they approached his Wednesday afternoon rally in Lakeland, Florida: Bob Welsh, a city commissioner from South Miami, had brought a set of speakers and was blaring the tape of Donald Trump bragging about sexual assault in 2005. The footage, which was obtained and published Friday by the Washington Post, shook up the presidential race and prompted dozens of Republican elected officials to formally abandon their party’s presidential nominee. Welsh was taunting Trump’s supporters, and had a sign for good measure:

These folks are playing the audio of the Trump tape over the speakers outside the Trump rally in Lakeland. pic.twitter.com/OXTxxA4Tdl

But the supporters who packed this rally hadn’t lost any sleep over the tape. They offered different theories as to where the video might have come from and what it really means, but they agreed on one thing: He’s still better than Crooked Hillary. As one middle-aged man put it, “He apologized for it, and Hillary doesn’t know how to apologize for anything.”

“I’m a guy, I’ve done worse,” said Henry Dupuis, who told me he was an immigrant from Canada. “Absolutely, me and my buddies? I’m serious about that.”

“What did I think of it?,” said Christine Lewis, from Lakeland. “Honestly, I thought that was the most ridiculous setup from the GOP. They set it up, they planned it, because it’s locker room banter—it’s all it was. Every guy in the United States of America has talked about doing a girl. In the bathroom. Or in the locker room, or wherever—on the bus. Let me tell you this: How come—this is what pisses me off—how come she can call a bunch of challenged kids at an Easter Egg hunt ‘retards’ and there’s no media coverage? That’s way worse than him talking about banging some girl.” (Jones was referring to a claim made in a book written by a high school girlfriend of Bill Clinton, which posits that Hillary Clinton mocked disabled children as first lady of Arkansas.)

Another Trump supporter, Diane (whose husband encouraged her not to give her last name) offered the entertainment industry defense: “There’s a lot of people in Hollywood, a lot of music people, rappers, that say a lot more dangerous and nasty language. And you know what? That language that Trump said in that was years ago, and it hasn’t killed anybody. And Hillary Clinton’s actions as secretary of state got people killed in Benghazi.”

“It doesn’t really affect me,” said Lew Gaskins of nearby Bartow. “He’s never been a politician. He’s always been a caricature, a TV star, so things like that are gonna be in his past. I think Billy Bush goaded him into it. He was just throwing out bravado, he wasn’t married at the time. I think they’re disgusting, every one of them.” (Trump was married to Melania at the time of the interview.)

David Jones, who wore a blue shirt with the word “Deplorable,” said the media should focus on something else: “What do they think about the tape that they’re just playing today about Obama showing his erection on his plane in 2008?” he asked me. The tape? “Yeah, it’s all over the internet now. It’s all over what’s his name, what’s the conservative guy’s name? Drudge.” (You can watch the video he’s talking about here.) As for the groping comments: “Well, it’s not right, but he didn’t mean it for an open mic, and he didn’t act on it. And Hillary’s husband acted on it.”

Inside the event, Barb Main of Lakeland referred me to still another tape when I asked her about Trump’s comments. “I don’t really like it, but it was 11 years ago,” she said. “He wasn’t in politics. I think what Bill and Hillary have done is worse. I’ve heard the tapes of her laughing about the 12-year-old that was raped by the 35-year-old guy that got off. And that’s just sick. She was defending the guy that raped her—she knows he did it, and got him off with a minimal sentence and laughing about it. And the way she destroyed the women that were involved with Bill.” (Roy Reed, who was interviewing Clinton in the recording in question, has clarified that Clinton was laughing at the “absurdity” of the Arkansas crime laboratory, and not the case itself.)

Sue Imbody, a real estate agent, told me she shrugged at the Trump tape because as a woman who had fought to break through in an industry dominated by men, she’d heard worse. “I’ve been in a lot of business transactions, and men are men,” she said. “And their discussions include some garbage that I would not use; sometimes it slips in my presence, but you know what, I understand that I’m not gonna change the world with my values, that if I want to participate and I want to know how it is in the real world, that I’m gonna have to get bigger than that, get beyond that, and understand the real crises we face.”

She continued, “They’re highfliers, high rollers. They talk their language; it’s a part of the good-old-boy system. I’m on the outside a lot of times, but they’re getting wiser, they’re getting more careful, and I’m all for women and so is Trump.”

A handful of people I spoke to did allow that Trump had done something undeniably wrong, but they emphasized forgiveness. “You know what, I’m a Christian woman and of course I do agree that that kind of talk is not something that is appropriate for the mainstream media,” Gwen Rollings told me. “However, he’s asked for forgiveness, and as Christians that’s what we’re supposed to do. I’m voting for his principles and his policies now.”

That same Christian charity was not available for the Republican politicians who had jumped ship over the weekend, though. “I would probably compare them to like Benedict Arnold,” Rollings said.