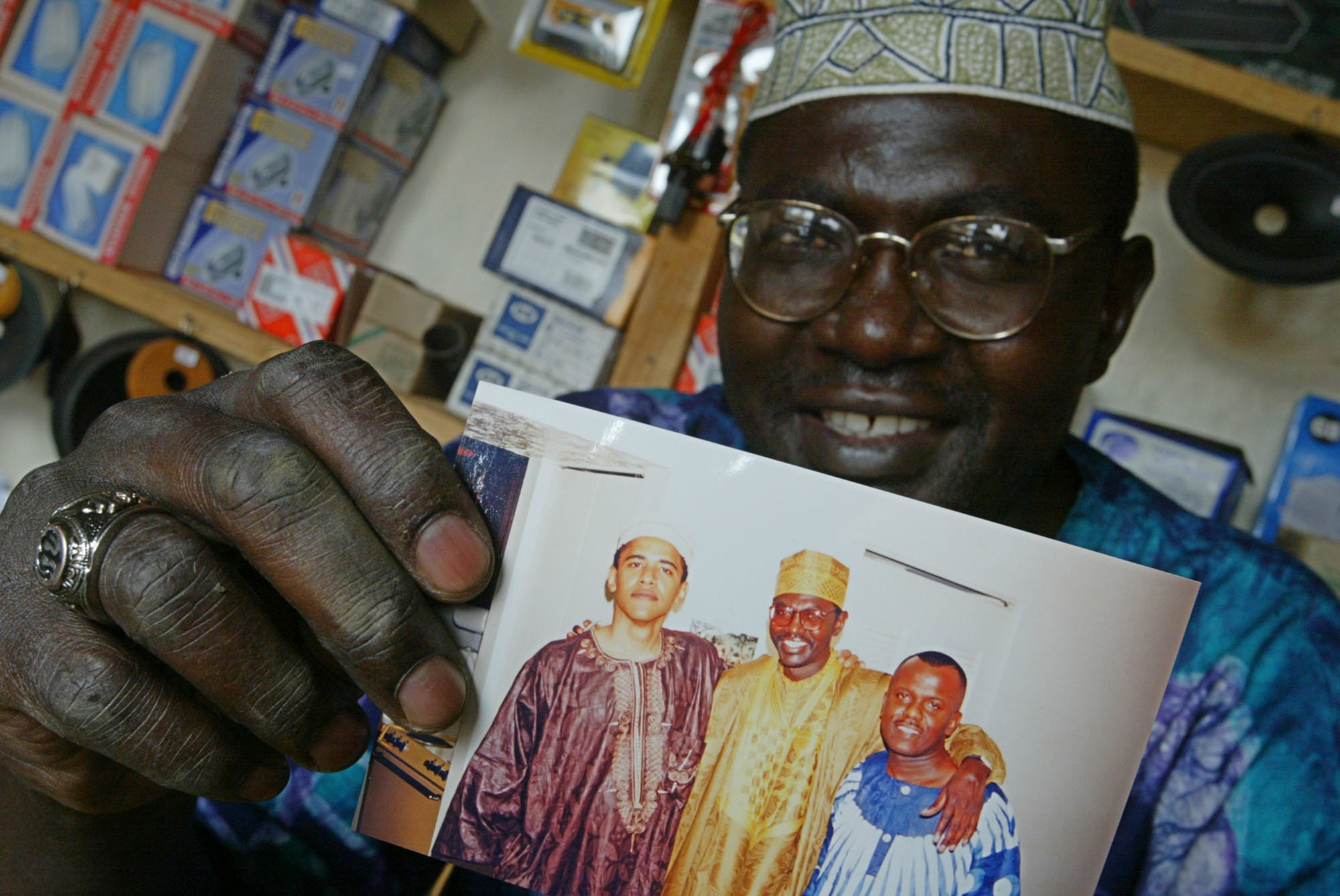 Malik Obama holds a photo of Barack Obama, himself, and a friend in his shop in Siaya, eastern Kenya, in 2004. Karel Prinsloo/AP

Donald Trump has spent years demonizing Muslims and warning that radical Islam is threatening the very core of our nation. He’s alluded to rumors of sinister links to the Muslim Brotherhood in the highest ranks of the Obama administration, namely in the form of Hillary Clinton adviser Huma Abedin. Many Trump supporters have been public proponents of the view that the Obama White House has been infiltrated by the Muslim Brotherhood, including Rep. Louie Gohmert (R-Texas), former Rep. Allen West (R-Fla.), and Joe Miller, who’s running for the Senate in Alaska. This week, one of Trump’s advisers even blamed the real estate mogul’s falling poll numbers on a global propaganda conspiracy launched by the Muslim Brotherhood.

Which makes it all the more strange that Trump would decide to bring President Barack Obama’s Muslim half brother Malik to Wednesday night’s debate. The conspiracy-minded right-wing press has long held up Malik Obama as proof-positive of the president’s secret Muslim terrorist ties. World Net Daily writer Jerome Corsi, one of the most prominent of the birther conspiracy theorists and a longtime Trump fan, has been covering Malik Obama for years and implying that he has undue influence on his brother in the White House. In 2013, Corsi reported on allegations that Malik was overseeing investments for the Muslim Brotherhood in Egypt and suggested that this financial relationship helped explain why the Obama administration was supposedly supporting the organization. Corsi later claimed that Malik, who built a mosque on the Obama family compound in Kenya, could soon be added to Egypt’s terrorist watch list because of his ties to the Brotherhood. (Malik has vigorously denied the allegations of links to the Muslim Brotherhood.)

But in 2015, the tone of WND‘s coverage shifted. What changed? Malik turned on his famous half brother in the film Dreams From My Real Father, a docudrama by Joel Gilbert that claimed Barack Obama’s real father was a Communist named Frank Marshall Davis. In the film, Malik—a man who sold letters from his famous brother—said the president is “not an honest man.” Later Gilbert claimed he’d gotten a draft manuscript from Malik; according to a WND story, the manuscript helped bolster the theory that former Weatherman Bill Ayers had helped write Barack Obama’s best-selling memoir, Dreams From My Father. In July, Malik announced his support for Trump, telling the New York Post, “I like Donald Trump because he speaks from the heart. Make America Great Again is a great slogan. I would like to meet him.”

Walid Shoebat, a vocal foe of Islam who claims to have converted to Christianity after engaging in jihad for the Palestinian Liberation Organization (a claim widely disputed), was the source for much of Corsi’s reporting on Malik’s supposed Islamic terrorism ties. After learning that Trump had invited Malik to the debate Wednesday, Shoebat was apoplectic. Writing on his website, he expressed bafflement over the Trump campaign’s decision. He wrapped up by saying, “P.S.: Malik, the bottom line is that you are a rotten egg. You live like one, you lie like one, because you are one rotten lying egg. Enjoy your moment of fame with Trump for tomorrow you will be tossed like a filthy rag.”