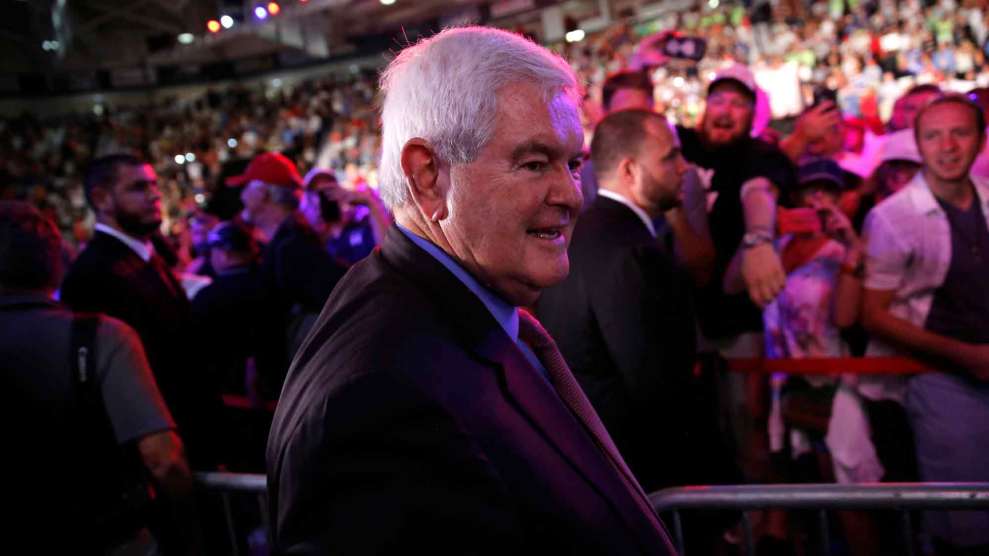 On Tuesday night, Newt Gingrich, the Republican who was forced to resign as House speaker in the late ’90s and who now is a top Donald Trump surrogate, got into a row with Fox News host Megyn Kelly. Toward the end of a segment on the presidential election, the often combative Gingrich started grousing about the media paying too much attention to all the women who have accused Trump of sexual assault (after a video emerged of Trump bragging about committing sexual assault). Kelly defended the media’s handling of this story: “We have to cover that story, sir.” What about a Hillary Clinton speech in which she referred to open borders? Gingrich retorted. “That is worth covering,” Kelly said.

Gingrich then angrily exploded: “Do you want to go back to the tapes of your shows recently? You are fascinated with sex and you don’t care about public policy. That’s what I get out of watching you tonight.” Kelly shot back: “I am not fascinated by sex. But I am fascinated by the protection of women.” Gingrich became irate and dared Kelly to say “Bill Clinton” and “sexual predator.” She did not take the bait, and shortly after that, Kelly said goodbye to Gingrich and asked him to “spend some time” working on his “anger issues.”

The exchange blew up Twitter and was the talk of the politerati. On Wednesday morning, as Trump was holding an event in Washington, DC, to promote his new hotel, with Gingrich one of the few notable GOPers in attendance, he congratulated Gingrich for tangling with Kelly (with whom Trump once feuded).

Following the ribbon-cutting ceremony in the hotel lobby, Mother Jones asked Gingrich about his emotional face-off with Kelly. “Do you really think that Megyn Kelly was overly fascinated with sex by asking about [the sexual-assault accusations regarding Trump]?” we inquired. Waving his hand, Gingrich replied, “I’m not going to talk about that.”