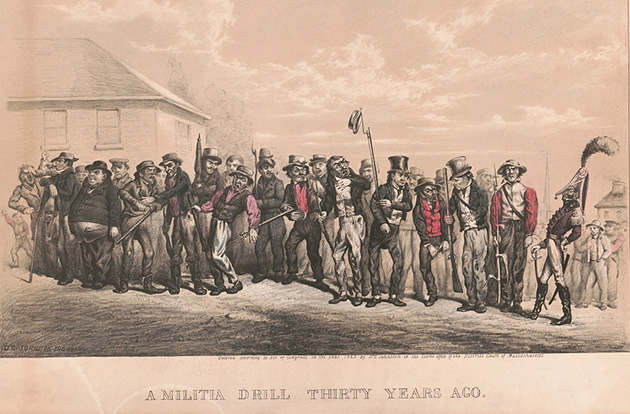 After independence, America’s militias were seen as an alternative to a standing army, but they fell by the wayside in the 19th century, only to be revived in the late 20th century by self-appointed patriots animated by fears of big government, illegal immigration, and societal collapse.

1776
General George Washington gripes about the militiamen among his forces, “whose behavior and want of discipline has done great injury to the other troops.”
1787
Constitutional Convention delegates clash over whether the militia should come under national control. As a compromise, the Constitution grants the federal government the power to call up the militia but leaves the appointment of officers to the states. The Second Amendment emphasizes that a “well-regulated Militia” is “necessary to the security of a free State.” 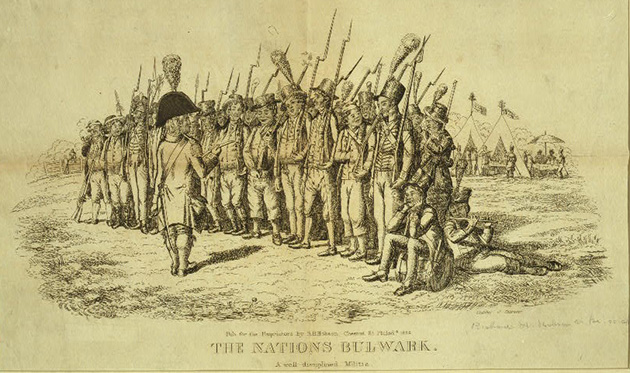 An 1829 print titled “The Nation’s Bulwark: A Well-Disciplined Militia” Library of Congress
1831
As mandatory militia duty becomes unpopular, states begin to abolish it. By the 1840s, many states set up an “organized” militia with actual responsibilities and an “unorganized” militia that exists in name only.
1903
The Militia Act of 1903 (also known as the Dick Act) beefs up state militias with federal funding and gives the feds the power to review state militias. 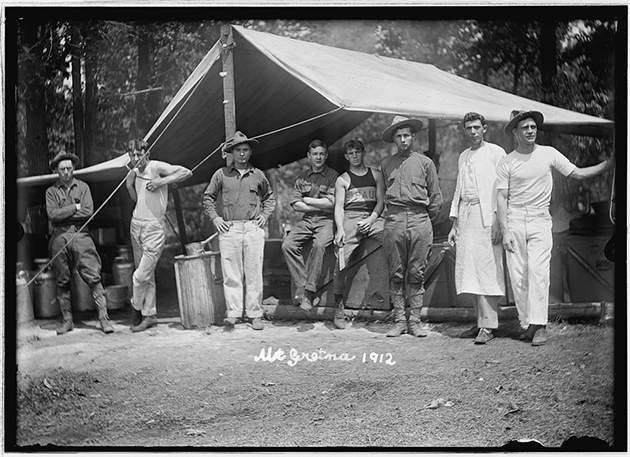 Pennsylvania National Guard camp, 1912 Library of Congress
1916
The National Guard, which evolved from the organized militia, becomes part of the Army.
1971
William Potter Gale, a white supremacist and anti-Semitic activist, forms a proto-“patriot” group called Posse Comitatus (Latin for “power of the county”), which purports that the highest level of authority is the county government. Gale says sheriffs who violate the Constitution should be taken to a “populated intersection” and “hung there by the neck.” The group spreads across the West and Midwest by the 1980s. 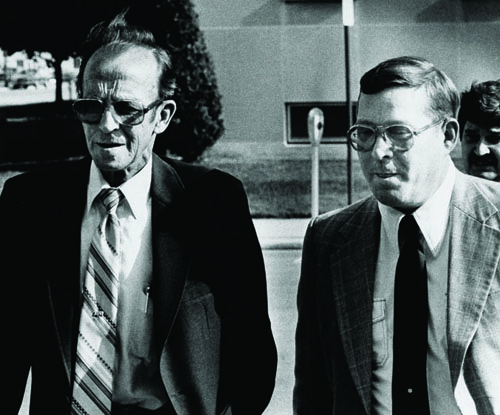 Posse Comitatus leader James Wickstrom, right, after being found guilty in 1983 of acting as a public official Associated Press
1976
Congress passes the Federal Land Policy and Management Act, kicking off the Sagebrush Rebellion, which seeks to establish state and local control over public lands in the West.
1983
Posse Comitatus member Gordon Kahl murders two federal marshals trying to arrest him in North Dakota. He’s later killed in a shootout, during which he kills a sheriff.
1990
President George H.W. Bush welcomes “a new world order,” popularizing a phrase that conspiracy theorists equate with the coming of a global totalitarian government. 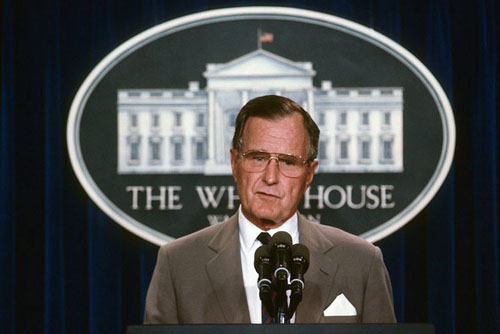 President George H. W. Bush Mark Reinstein/ZUMA Wire
1992
White supremacist Randy Weaver surrenders after his wife, his son, and a US marshal are killed during a standoff at his cabin in Ruby Ridge, Idaho. The event energizes the far-right “patriot” movement, which includes armed militias. 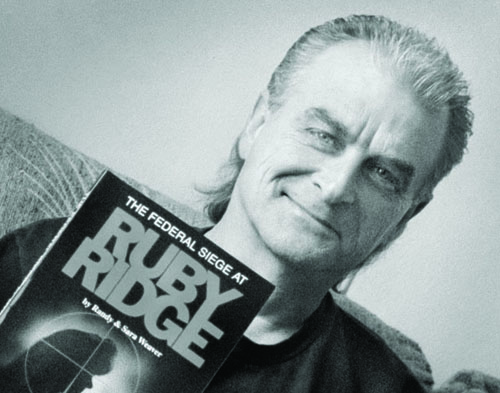 Randy Weaver Michael Williamson/The Washington Post/Getty Images
1993
Federal firearms agents attempt to raid the Branch Davidian compound in Waco, Texas. The ensuing battle kills four agents and six Davidians. A 51-day siege ends when the FBI sprays tear gas in the building, which bursts into flames, leaving 76 people dead.
1994
Responding to the Brady Bill’s mandatory five-day waiting period for handgun sales, Michigan Militia leader Norman Olson tells the New York Times, “We are ceasing to be a Republic…When people sense danger, they will come together to defend themselves. That is what’s happening.” 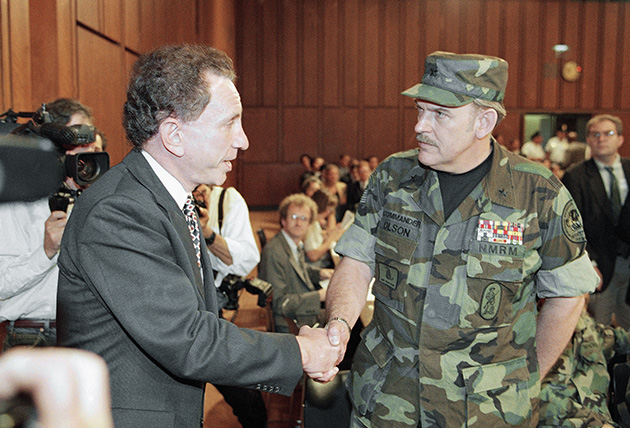 Sen. Arlen Specter (R-Pa.) greets Norman Olson of the Michigan Militia at a 1995 congressional hearing on the militia movement. AP Photo/Joe Marquette
1995
A truck bomb destroys the Oklahoma City federal building, killing 168 people, including 19 children. Bomber Timothy McVeigh had attended militia meetings. Militia members testify in Congress to defend their movement, but within a decade the number of militia groups drops from 441 to 35, according to the Southern Poverty Law Center (SPLC). 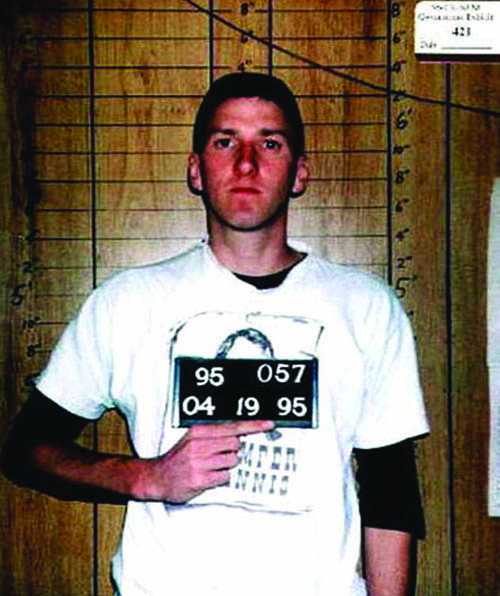 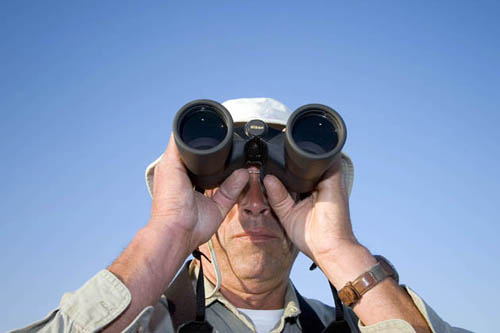 A Minuteman Project volunteer Jack Kurtz/Zuma Press
2008
Following the election of President Barack Obama, the number of militia groups surges from 42 to 127 in one year. Mike Vanderboegh promotes the idea of the three percenters, named after the claim that only 3 percent of colonists were the backbone of the American Revolution. 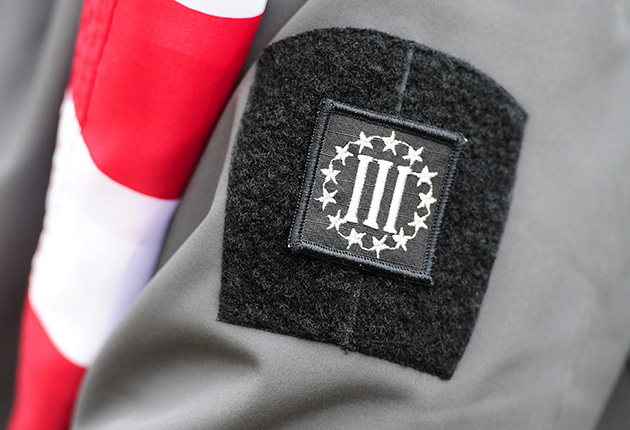 A patch with the three percenter “III” logo Alex Milan Tracy/AP
2009
The Department of Homeland Security warns of an increase in right-wing extremism. After a fierce backlash from conservatives, it withdraws the report. Montana attorney and Army veteran Stewart Rhodes launches the Oath Keepers, a militia group that focuses on recruiting military members, police officers, and first responders.
2014
After the Bureau of Land Management confiscates his cattle because of more than $1 million in unpaid grazing fees, Cliven Bundy launches an armed face-off at his Nevada ranch. Hundreds of militiamen, including three percenters, respond to Bundy’s call for support. The BLM backs down, though Bundy is now facing nine federal charges. 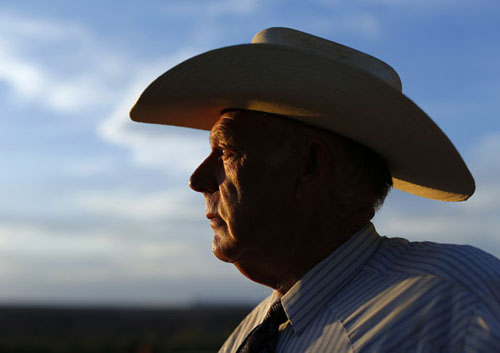 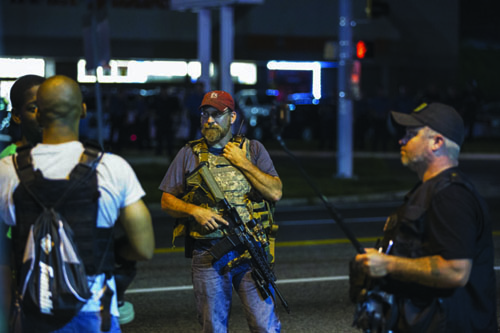 Members of the Oath Keepers in Ferguson, Missouri Lucas Jackson/Reuters
2016
Cliven Bundy’s son Ammon founds Citizens for Constitutional Freedom and leads the occupation of an Oregon wildlife refuge after two ranchers were sent to prison for setting fire to public lands. The standoff ends shortly after officers shoot an occupier who drove through a roadblock. Ammon Bundy and 18 other occupiers are currently facing federal charges. In October, three members of a Kansas militia group known as the Crusaders are charged with planning to bomb Somali immigrants one day after the election. 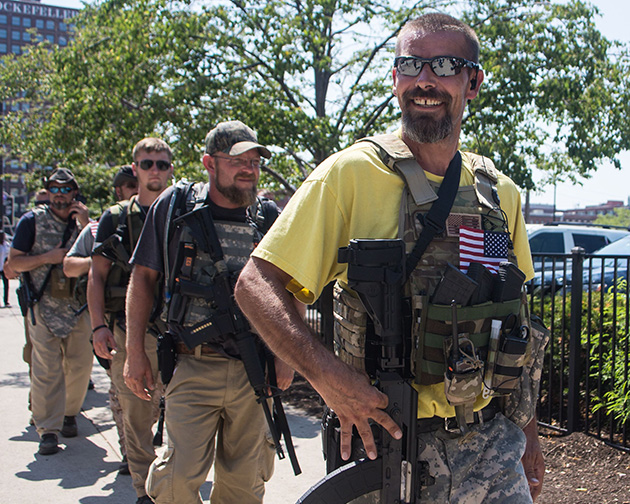