The bank formerly headed by the finance chair of Donald Trump’s presidential campaign—and a front-runner to become Trump’s treasury secretary—is facing allegations that it discriminated against minorities.

Two California nonprofit housing organizations have formally asked the US Department of Housing and Urban Development to investigate allegations of racially discriminatory practices at OneWest Bank, now a subsidiary of CIT Bank and formerly headed by Trump adviser Steven Mnuchin. The complaint alleges that OneWest systematically refused to loan to people of color or to establish branches in minority communities in California.

In 2009, Mnuchin and a group of investors bought IndyMac Bank on the cheap, after it had suffered one of the biggest bank failures in US history. The bank, famous for making loans to people who couldn’t document their income, had collapsed under a mountain of bad debt and left behind a wake of foreclosed homes. After the sale, Mnuchin became chairman and CEO and changed the name to OneWest Bank.

The complaint to HUD is the latest in a string of legal complaints against OneWest, which has faced criticism for its foreclosure proceedings that disproportionately affected minorities. It has been successfully sued for mortgage fraud, and activists have frequently accused the bank of moving too quickly to foreclose. (In one case, it went so far as to lock a Minnesota woman out of her mother’s home during a blizzard.) Because of these abuses, community lending activists tried to block OneWest’s merger with CIT, which was finalized in August 2015. After the merger, Mnuchin joined the CIT board.

The new HUD complaint, which does not name Mnuchin personally, alleges more systematic discrimination against minority communities. It claims that OneWest violated the Fair Housing Act by discriminating against minorities in its mortgage lending and with the selection of sites for its bank branches in California. Research by the California Reinvestment Coalition, one of the groups that filed the complaint, found that OneWest did not have a single branch in a majority-black neighborhood in six areas of Southern California where OneWest did business. Out of the 74 branches in the Southern California study area, OneWest had only one branch located in a majority-Asian area and 11 in Hispanic areas, mostly in Los Angeles.

The bank also doesn’t make many loans to minorities in those areas. According to the bank’s own data submitted to federal regulators, in 2012 and 2013 OneWest didn’t make a single loan to an African American for a home purchase or home improvements in Los Angeles County, where 9 percent of residents are black. OneWest was far likelier to foreclose on an existing loan to a person of color than to lend to one, according to the California Reinvestment Coalition. 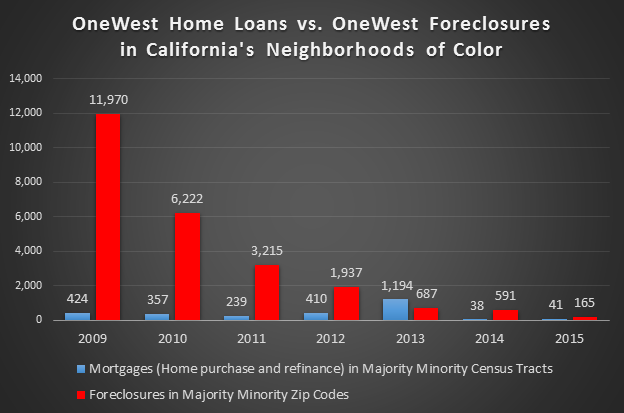 Its record for Latino customers was also dismal. Latinos make up 43 percent of the combined Los Angeles statistical area studied by the housing advocates who filed the HUD complaint, yet the percentage of OneWest mortgages going to Latinos there in 2015 was a mere 8.4 percent.

The HUD complaint alleges that OneWest contributed to the decline of minority neighborhoods by neglecting homes it had foreclosed on in those neighborhoods, while actively maintaining and marketing for sale homes in white areas. The Fair Housing Advocates of Northern California looked at bank-owned homes in Contra Costa and Solano counties between April 2014 and May 2016 and discovered that OneWest’s homes in white neighborhoods had prominent “for sale” signs out front, manicured lawns, locked doors, and decent upkeep. By contrast, according to the complaint, the OneWest homes in minority neighborhoods were buried in trash, and most were surrounded by dead grass and weeds and featured boarded-up windows and broken doors or windows, making them look abandoned.

The HUD complaint asserts that all of this adds up to violations of the Fair Housing Act, and it asks the agency to investigate whether CIT is now continuing to violate the act. Chancela Al Mansour, the executive director of the Housing Rights Center, said in a press release, “This complaint raises serious concerns about the extent to which people of color have been cut off from branches, mortgages and other banking services that OneWest should be providing in the communities where it does business.”