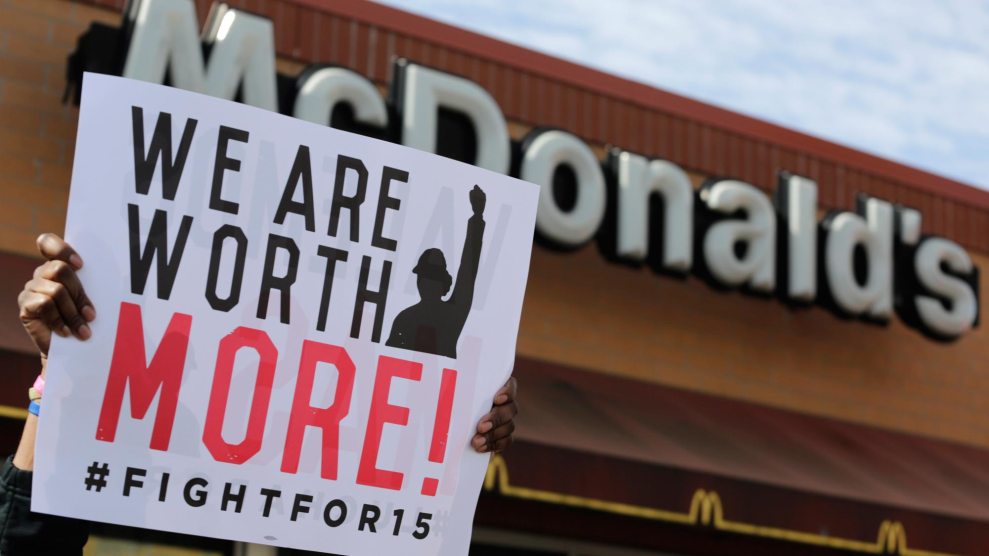 On Election Day, voters in four states will consider increasing the minimum wage in their states via ballot measures.

Arizona, Colorado, and Maine propose moving toward a $12 minimum wage by 2020, while the state of Washington would raise its minimum wage to $13.50 an hour, also by 2020. Arizona and Washington’s measures would also create mandatory paid sick leave for workers. If these initiatives pass, as many as 2.1 million people could soon earn higher hourly wages.

These ballot measures mark a critical point in the fight for better wages that has gained steam in recent years. In the 2013 State of the Union address, Obama urged Congress to raise the federal minimum to $9 an hour. Later that year, he called for yet another increase, this time to $10.10 an hour. In 2015, the president backed a $12 minimum wage by 2020—echoing the proposals on several ballots this election.

Grassroots support ramped up in 2012 with the Fight for 15 movement in which striking fast-food workers in New York City pushed for a $15 minimum wage—a standard that has since passed in Washington, DC, California, New York, and more than a dozen cities. Sen. Bernie Sanders, whose calls for a $15 minimum wage in the presidential primary rallied huge crowds, arguably influenced Hillary Clinton’s position on the issue, as she originally supported a $12 minimum wage but now is urging a boost to $15.

“We were talking about a $9 wage five years ago and now we’re talking about $15,” says David Cooper, a senior economic analyst at the Economic Policy Institute (EPI). “That’s a pretty dramatic change.”

The wage fight has created rifts in the Republican Party. In 2014, voters in four traditionally red states—Alaska, Arkansas, Nebraska, and South Dakota—passed ballot measures implementing a higher minimum wage. According to The Fairness Project, which helps minimum wage campaigns across the country, this year’s four measures are all also likely to pass—even in solidly purple Arizona.

“That a ballot measure is moving there and seems to have a lot of support speaks to the fact that the public is overwhelmingly supportive of raising the minimum wage, among both parties,” says the EPI’s Cooper. “It’s really just Republican members of Congress that are preventing it from happening at the federal level.”

Republican politicians have long obstructed minimum-wage increases: Many have voted against raising the federal minimum wage (currently $7.25 an hour), and some have even said they oppose the existence of any minimum wage. The presidential race is no exception—Donald Trump has been a foe of minimum-wage increases, though his position has softened throughout the campaign. Early on, Trump responded to a question about minimum-wage hikes with “our wages are too high.” Since then, he’s said he’s open to raising the federal minimum wage, though he believes the decision should be up to states.

In Arizona, where minimum wage is currently $8.05 per hour, the proposal on the ballot has been a main wedge between Sen. John McCain and his Democratic challenger Rep. Ann Kirkpatrick. McCain told the Tucson Weekly that the increase would be bad for families, citing his conversations with local franchisees of fast-food chains such as Taco Bell and McDonald’s who told him they would have to let workers go to support the wage hike. “Somebody is going to have to convince me that it’s good for employment in America, and I don’t think it is,” McCain said. Rep. Kirkpatrick has said she supports the minimum-wage ballot proposal.

“The way to really confront income inequality when things aren’t happening at the top is through ballot initiatives.”

In Maine, the current hourly minimum wage is $7.50, and Republican Gov. Paul LePage expressed strong opposition to the ballot’s minimum-wage proposal. He said last month that two main proponents of the ballot measure should be jailed because the wage increase would drive up the cost of goods so drastically as to constitute “attempted murder” of senior citizens on fixed incomes. “To me, when you go out and kill somebody, you go to jail. Well, this is attempted murder in my mind because it is pushing people to the brink of survival,” LePage said on Portland’s WGAN radio.

Colorado’s ballot proposal is the result of obstruction by Republican politicians in the state. In 2015, Democrats in Colorado tried twice to pass minimum-wage bills in the state Legislature, but after Republican members derailed both bills, a grassroots group began making moves to implement the proposal via ballot instead.

“The way to really confront income inequality when things aren’t happening at the top is through ballot initiative,” says Jonathan Schleifer, executive director of The Fairness Project. He notes that minimum-wage increases see broad support across members of all parties, and Tuesday’s ballot initiatives will give voters an opportunity to show politicians, particularly Republican ones, what they really need.

“Political leaders at the state level are deeply out of touch with what their constituents want,” he says “One of the reasons we have to go to the ballot is they allow voters to circumvent politicians who are out of touch with their priorities.”