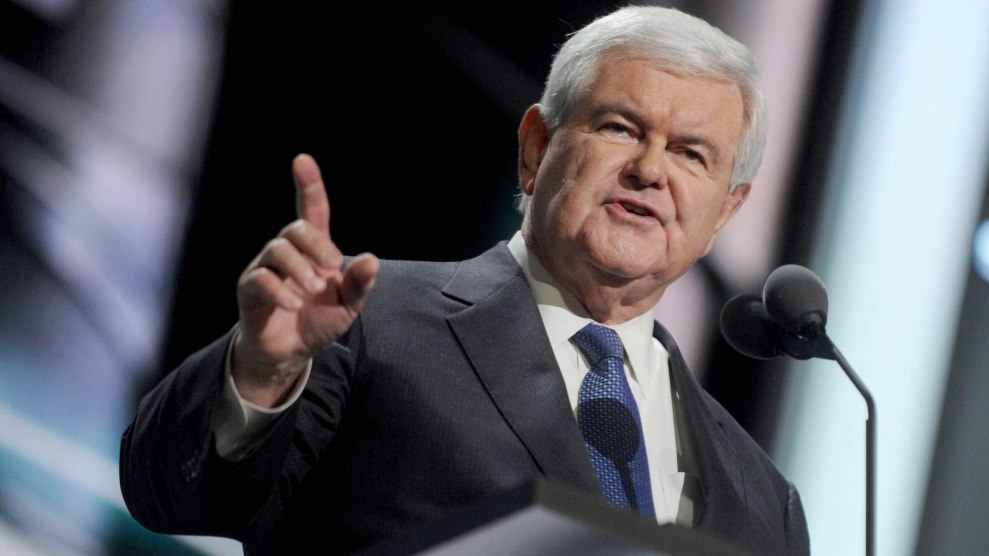 Newt Gingrich, one of Donald Trump’s top surrogates and a possible Cabinet pick for the Republican president-elect, does not believe that Trump, who lost the popular vote to Hillary Clinton, won the presidency within a fully fair and representative electoral system.

That is, if Gingrich’s words from two years ago can be taken seriously.

As has been widely noted on the internet, Trump four years ago questioned the legitimacy of the Electoral College system, which selects presidents based on the states they win rather than the total votes they receive. On Election Day 2012, when there was public speculation that Mitt Romney might win the popular vote but lose in the Electoral College to President Barack Obama, Trump went on a tweet storm, calling the election “a total sham and a travesty.” He exclaimed, “We are not a democracy.” He called for “revolution” against this “great and disgusting injustice” and slammed the “phoney electoral college.” In April, Ben Carson also questioned the need for the Electoral College.

Now add Gingrich to the list of Trumpsters who question the legitimacy of the system that handed Trump the presidency.

In 2014, Gingrich sent a letter to National Popular Vote, a nonpartisan group that promotes legislation that would guarantee the presidency to the candidate who receives the most popular votes nationally. According to its website, 11 states have passed legislation that would hand their electoral votes to the popular-vote winner if enough states do the same. The measure has been approved in one chamber in an additional 12 states. The organizers of this initiative advocate the reform mainly because the current system compels candidates to devote time and resources only to swing states, meaning that Americans in other states (and their specific issues) are largely ignored. This campaign has not received tremendous attention, but two years ago Gingrich jumped on board.

In his letter to the organization, Gingrich endorsed its proposal. He wrote, “This important project has the potential to transform the way we elect our presidents and to make sure all Americans have a voice in their future.” Gingrich explained:

We are a country of 314 million people, the most diverse nation on Earth. This is one of our greatest strengths, and it means our president must be the president of an enormously complex and varied country…Unfortunately, the current system for electing presidents does not reflect this tremendous diversity. The winner-take-all-method of allotting electoral votes means candidates must focus their efforts on just a handful of closely divided states.

Gingrich added, “America would be better served with a presidential election process that treated citizens across the country equally.” Picking a president by the national popular vote, he asserted, would be in sync with “fundamental democratic principles.”

That was then. This is now. The most current vote counts show Clinton leading Trump, 60 million votes to 59.8 million votes, a spread of one-fifth of a percentage point. That means more Americans wanted her to be president. But don’t expect Gingrich—or Trump—to question the fairness of a process that is now putting one of the most divisive major-party candidates into the White House. All their previous talk about fairness and the popular vote is no longer operative. But Trump’s 2012 observation still stands: The United States may be a republic, but, in pure terms, it is not a democracy.