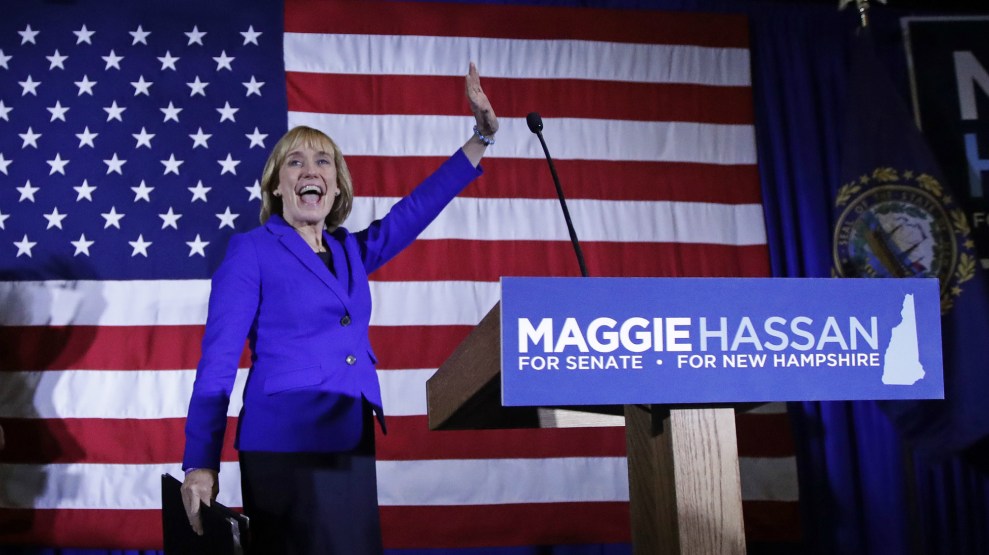 New Hampshire Gov. Maggie Hassan has won the highly contentious battle for the state’s Senate seat, unseating Republican incumbent Kelly Ayotte by a razor-thin margin. With Republicans having secured control of the chamber early Wednesday morning, Hassan’s election will not affect the balance of power in the Senate.

The New Hampshire race was too close to call for most of Tuesday night, with the gap between the candidates narrowing to less than 1,500 votes. Hassan declared victory Wednesday morning, but the results were not made official until later in the afternoon. Ayotte conceded the race shortly after the official results were announced.

With two of the state’s most prominent political figures on the ballot, the New Hampshire contest was one of the closest Senate contests of the year. Both candidates entered Election Day in a virtual dead heat. Their debates were often fierce and Hassan and Ayotte both moved to the center in an effort to gather votes from the other party. The race was the second-most expensive Senate contest this cycle, with more than $120 million dollars pouring into the state.

Ayotte’s fight to protect her seat was complicated by the rise of Donald Trump. Hassan frequently took aim at Ayotte’s support of the Republican presidential nominee. During a debate last month between the two candidates, Ayotte awkwardly said the Republican presidential nominee “absolutely” would be a good role model for children. Hassan lost no time in attacking her opponent, and Ayotte quickly walked back her comments, saying she misspoke during the debate. Ayotte completely withdrew her support for the nominee after video surfaced of Trump bragging about touching women without their consent, a move that opened the senator up to criticism from her fellow conservatives. The tight contest in New Hampshire extended to the presidential race, with Clinton leading by a slim one-point margin after all precincts had reported.

Hassan has touted her ability to work across the aisle during her time in the governor’s mansion, noting that she engaged Republicans to negotiate the state’s budget, ending up with a $62 million surplus. But Hassan’s call for the United States to temporarily halt accepting Syrian refugees—she’s the only Democratic governor to do so—has put her in hot water with Democrats. (Hassan has not clarified whether she still supports a temporary ban.) In the campaign’s final weeks, Hassan played up her ties with Hillary Clinton in an effort to shore up her support among left-leaning voters.

In a recent interview with Mother Jones, Hassan said she hopes to secure emergency funding to address the state’s opioid crisis and reduce the influence of special interests on Capitol Hill.

“Washington has been captured by corporate special interests like the Koch brothers who stack the deck for themselves and against the middle class,” she said. “I’m running for Senate to change that.”