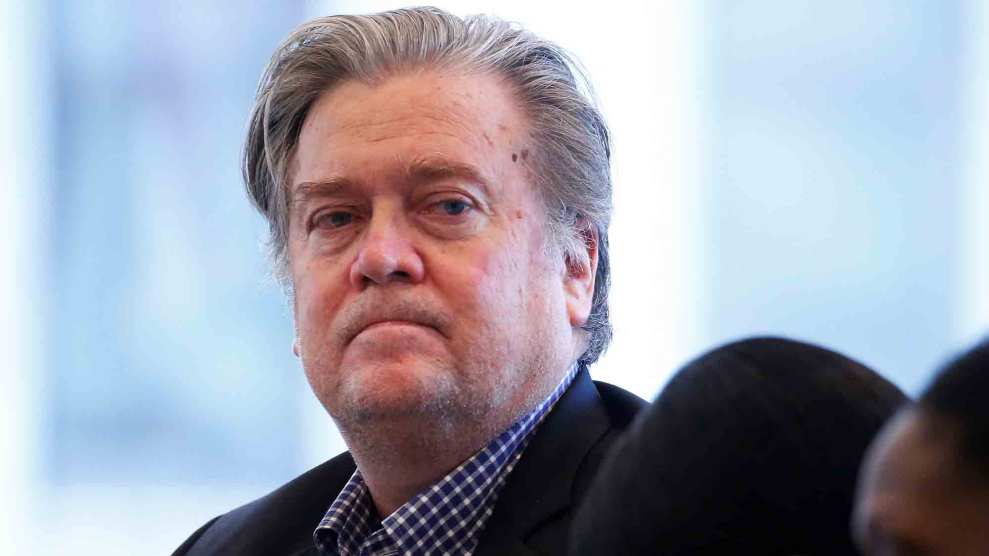 White nationalist leaders have been vocal in their praise for Breitbart News chairman Stephen Bannon, whom President-elect Donald Trump named as his chief White House strategist on Sunday. But many major Jewish groups have kept quiet about Bannon’s new job, despite the anti-Semitic tropes peddled by both Breitbart and the Trump campaign, as well as allegations that Bannon himself is anti-Semitic (which Bannon denies).

The American Israel Public Affairs Committee, the powerful pro-Israel lobbying group that’s one of the highest-profile Jewish American organizations, told Politico that “AIPAC has a long-standing policy of not taking positions on presidential appointments.” It was joined by the American Jewish Committee, which told Forward‘s Nathan Guttman, “Presidents get to choose their teams and we do not expect to comment on appointment of every key advisor.”

Mother Jones contacted a dozen other major Jewish American organizations on Monday, the majority of which did not address Bannon’s hire. B’nai B’rith International, a Jewish advocacy organization dedicated to “making the world a safer, more tolerant and better place,” declined to comment. The Jewish Council for Public Affairs did not answer questions about whether Bannon’s hire affected JCPA President David Bernstein’s plan, laid out in a recent statement, to “engage the Administration, not in violation of our values but in service of them.” Six other groups did not respond to requests for comment from Mother Jones.

But some Jewish groups have responded forcefully to Bannon’s appointment. The Anti-Defamation League applauded Trump’s hiring of former RNC Chairman Reince Priebus as chief of staff while blasting Bannon’s appointment. “It is a sad day when a man who presided over the premier website of the ‘alt-right’—a loose-knit group of white nationalists and unabashed anti-Semites and racists—is slated to be a senior staff member in the ‘people’s house,'” wrote ADL CEO Jonathan Greenblatt in a statement on Monday. The National Council of Jewish Women also opposed the hire in a statement to Mother Jones. “If President-elect Trump truly wants to bring together his supporters with the majority of the country that voted against him—by a margin that is nearing two million people, Bannon and his ilk must be barred from his administration,” wrote Nancy Kaufman, the group’s CEO. Social justice group Bend the Arc called Bannon “an avowed bigot” whose appointment is “as horrifying as it is unsurprising.”

Two other groups, the Jewish women’s organization Hadassah and the Central Conference of American Rabbis, expressed concerns over Bannon but did not outright oppose giving him a White House post. “If he is to serve our country, we expect Mr. Bannon to denounce the anti-Semitism, anti-Muslim rhetoric, racism, sexism, and denial of LGBT rights that we continue to face as a nation, just as we expect the same from President-elect Trump,” said CCAR chief executive Steve Fox in a statement.

Steve Rabinowitz, a consultant to Jewish groups, told the Washington Post on Tuesday that the reluctance of Jewish groups may come down to political strategy. “They really do want to work with the new administration as much as they can, inasmuch as their conscience will allow,” he said. “They have legislative agendas.”