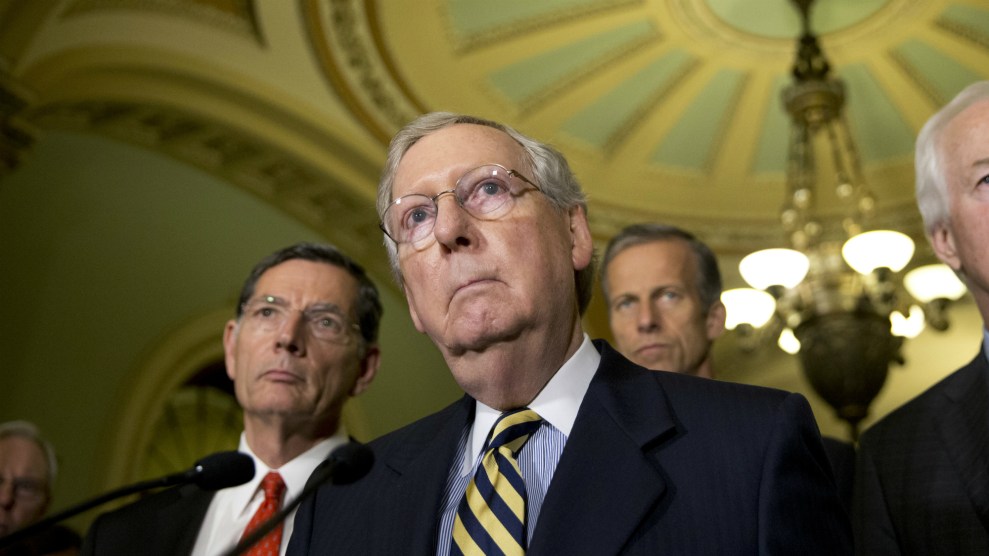 Democrats fell short in their bid to take a majority in the US Senate, leaving Republicans in control of both branches of Congress and giving them a decisive say in Supreme Court appointments.

Going into Tuesday, Republicans held a four-seat lead over Democrats in the Senate. Democrats did gain a seat early in the night, in Illinois. But the nail in the coffin for their hopes of taking the Senate was a late-night call for incumbent Republican Pat Toomey in Pennsylvania, who had been reluctant to support Donald Trump. Toomey held off on announcing that he was voting for Trump until the last minute, but he seemed to ride Trump’s coattails as the Republican swept Pennsylvania broadly.

New Hampshire remained too close to call, but even if Republican incumbent Kelly Ayotte loses to challenger Maggie Hassan, it would not be enough to give Democrats control of the Senate.

Very little went right for Democrats in their pursuit of the Senate, though a handful of victories were better than the rest of the political map.

In Illinois, Democratic challenger Tammy Duckworth, a decorated combat veteran, defeated GOP incumbent Ron Kirk, even though he ran as an anti-Trump Republican. In fact, if one minitrend emerged in the Senate results, it was that Republican candidates who disavowed Trump lost. Aside from Kirk, in Nevada, Republican Joe Heck lost his bid to steal outgoing Sen. Harry Reid’s seat, with Catherine Cortez Masto keeping the seat in the blue column. Cortez Masto is the first Latina woman to be elected to the US Senate.

But the bright spots for Democrats were few and far between. Following Trump’s path to victory in North Carolina, incumbent Richard Burr kept his seat in a narrow win.

As Clinton’s “firewall” crumbled in the upper Midwest, incumbent Republican Ron Johnson easily pushed back what was once thought to be a strong challenge from his Democratic opponent, former Sen. Russ Feingold.

In Missouri, Jason Kander had excited Democratic hopes with a memorable campaign ad where he assembled a rifle while blindfolded, emphasizing his familiarity and comfort with guns, but incumbent Roy Blunt pulled off a win.

In Florida, where Trump eked out a narrow but pivotal win, Democrats once had high hopes to pick up a seat, but onetime GOP presidential hopeful Marco Rubio easily won reelection, despite having fought bitterly with Trump and telling presidential primary voters that he couldn’t stand serving in the Senate. This preserves Rubio’s political career, although a Trump presidency would make Rubio’s presumed 2020 presidential run less likely. Similarly, Ohio, which once seemed a promising spot for a Democratic pickup in the Senate, was called for incumbent Republican Rob Portman by the Associated Press shortly after 7:30 p.m.

While the race for the White House was clearly the main event, the fight for the Senate was a heavyweight bout that drew many conservative big donors after it became clear that Trump would become the GOP nominee. But it wasn’t just the Republicans; both parties poured everything they had into the handful of competitive Senate seats that would determine control of the chamber. Including money spent by candidates, the parties, and outside groups, Republicans may have spent as much as $422 million this election, and Democrats spent another $383 million.

In the Pennsylvania Senate race alone, the campaigns for the two major-party candidates dropped just over $40 million on the race, with Toomey outspending Democrat Katie McGinty by about $16 million, and super-PACs and other outside groups spent at least another $115 million. In tiny New Hampshire, where there are just 919,000 registered voters, super-PACs spent $90.6 million on the Senate race. The groups backing Republicans appear to have accomplished their mission.