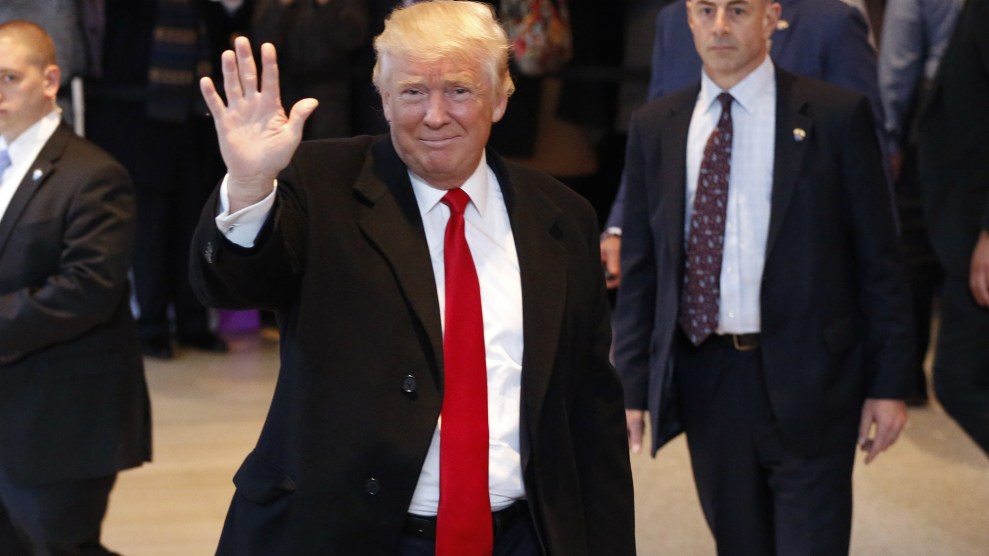 In August, when it looked likely that Hillary Clinton would win the presidency, Rep. Jason Chaffetz (R-Utah), chairman of the House Oversight Committee, insisted that no one should have any doubt that he would be tough on the next president when it came to personal financial entanglements.

“If you’re going to run and try to become the president of the United States, you’re going to have to open up your kimono and show everything, your tax returns, your medical records. You are just gonna have to do that. It’s too important,” Chaffetz said.

But Chaffetz, who just 11 days before the election quickly blasted out the news that FBI Director James Comey had “reopened” the FBI investigation in Clinton’s emails (which was not quite true), has become quiet on the question of what’s under Trump’s kimono.

Two weeks ago, Rep. Elijah Cummings (Md.), the ranking Democrat on the committee, sent Chaffetz a letter requesting that the committee’s Republicans open an inquiry into Trump’s potential conflicts of interest and his claim that he planned to put his assets into a “blind trust.” Based on the description offered by Trump and his surrogates, this supposed blind trust would allow his children to manage the sprawling Trump business organization, but the arrangement would not force Trump to surrender his interest in any of his enterprises. In other words, it would not be a blind trust. (An actual blind trust places assets under the control of an independent third party and prevents the owner from knowing the assets in his or her portfolio.)

Chaffetz responded to Cummings’s request for an investigation with silence. So on Monday, Cummings sent Chaffetz a follow-up letter, signed by all 17 Democratic members of the committee, re-upping the request for a probe examining Trump’s potential financial conflicts.

“You have the authority to launch a Committee investigation, and we are calling on you to use that power now,” Cummings wrote. “You acted with unprecedented urgency to hold ’emergency’ hearings and issue multiple unilateral subpoenas to investigate Secretary Clinton before the election. We ask that that you show the same sense of urgency now.”

Last week, Trump told reporters at the New York Times that the president “can’t have a conflict of interest.” It is true that Trump is not covered by conflict-of-interest rules that govern other high-ranking federal officials. But potential conflicts still exist, and it’s possible that Trump’s international business dealings run afoul of a constitutional clause banning federal officials from taking gifts from foreign governments. Ethics experts have told Mother Jones that only Congress is in a position to address Trump’s conflicts of interest.

His spokeswoman did not return a request for comment.

Rep. Justin Amash (R-Mich.), a member of the committee, has raised the issue of Trump’s conflicts. On November 21, he tweeted at the president-elect, “You rightly criticized Hillary for Clinton Foundation. If you have contracts w/foreign govts, it’s certainly a big deal, too. #DrainTheSwamp.” But Chaffetz has been mum on this front. So far, Chaffetz, like most Republican leaders, is leaving Trump’s swamp alone.

The full letter sent by Democrats today is below.