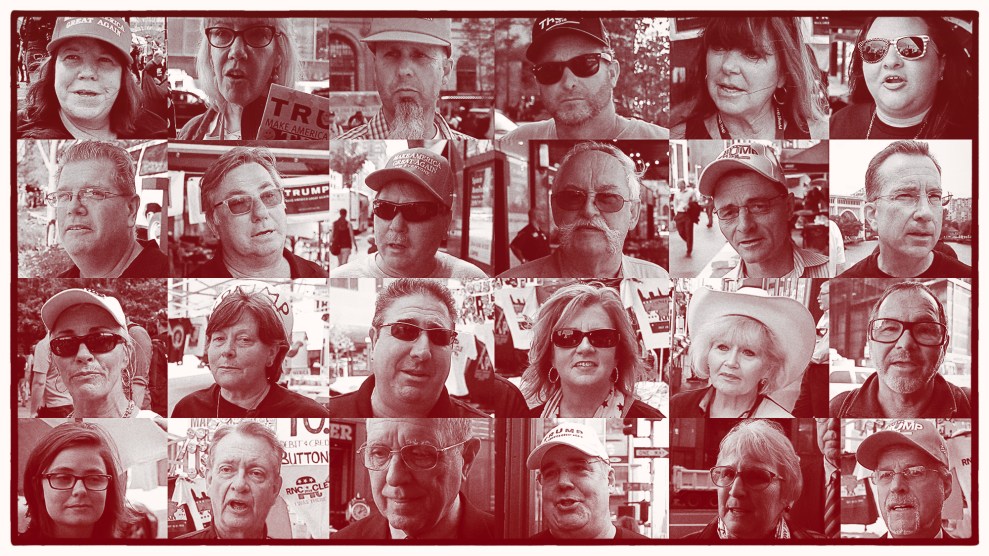 Can I pop my "filter bubble" by adding all these Trump voters to Facebook? Let's find out.James West/Mother Jones

We live on a Facebook island where a stream of news endlessly conforms to and reinforces our political views. That’s one theory, at least, behind why the US election results stunned half the country, stuck as we are in the social worlds of a segregated America, sustained by sometimes fact-free algorithms.

“American political discourse in 2016 seemed to be running on two self-contained, never-overlapping sets of information,” wrote Joshua Benton at Nieman Lab on Wednesday. The death of the news business and Facebook’s profit motive have combined, Benton argues, to make Facebook a “sewer of misinformation.” Here’s how he describes the so-called “filter bubble” in which we live:

Some of it is driven by ideology, but a lot is driven purely by the economic incentive structure Facebook has created: The fake stuff, when it connects with a Facebook user’s preconceived notions or sense of identity, spreads like wildfire…I’ve come to think that the rise of fake news—and of the cheap-to-run, ideologically driven aggregator sites that are only a few steps up from fake—has weaponized those filter bubbles.”

Facebook itself did some research into these filter bubbles and found its news-ranking algorithm did modestly reduce the diversity of political content for users—slightly more for liberals—but by far the most important factor in that exposure was who we’re friends with. Makes sense: The “composition of our social networks is the most important factor limiting the mix of content encountered in social media,” the company found in a 2015 report in the journal Science. “Liberals tend to be connected to fewer friends who share conservative content than conservatives (who tend to be linked to more friends who share liberal content).”

I have lots of journalist friends. Lots of Australian friends. And lots of politically liberal friends. And so my own social-media feeds have been packed with shock and outrage at the result of the election. That doesn’t surprise me: My conservative Facebook friends posted their outrage at Trump during the campaign, too. Connecting to Trump voters’ everyday thoughts and opinions via Facebook alone has basically been impossible.

And so, I’m embarking on an (unscientific) experiment. In a series of video reports over the last few months, I spoke with more than two dozen Trump supporters hailing from all over the country. I’m tracking them down again and asking: Can I friend you on Facebook?

Here’s everyone I spoke to in a handy 90-second video:

I’ve already had some luck. Tuffy Nicholas, a 60-year-old circus producer from Sarasota, Florida, was excited by the idea.

“Most of my friends thought he would win by a landslide like he did,” he told me on the phone, illustrating the divide. (I met Nicholas in Cleveland during the convention there, when he was selling Trump merchandise.) But Nicholas downplayed possible tensions between opposing groups of Americans. “I’m optimistic, and I’m hoping for the best. I’m very pleased that the president [Obama] and Trump had a good meeting, and everyone is aiming for a smooth transition.”

“Most of my friends thought he would win by a landslide like he did.”

Tim Graney, from Katy, Texas, spent election night cheering on Trump outside the Fox News studios in midtown Manhattan. I had met the 50-year-old Republican earlier that day. He was also impressed by what he sees as Trump’s desire to unite America.

“He was very positive and very complementary of Secretary Clinton…given the rhetoric and outlandish things both parties have said over the last year,” he told me later, back in Texas with a hoarse voice. “I think that’s setting a very positive tone for uniting the country.”

He also said Trump protesters are overreacting. In 2008, he said, “I was right there in the thongs of the tea party, and we felt just as disenfranchised and looked down upon.” Now, he says, it’s their turn.

Graney and I are now adding each other on Facebook.

I did run into an obstacle with Glenn Hessler, 52, from Erie, Pennsylvania. He’s not on Facebook. “They control the news and they’ve also been found guilty of suppressing speech,” he said. “So you’ve got another universe where free speech and speech in general is controlled by the powers that be behind the internet…It’s an extension of Big Brother.”

He was into the idea of staying in touch, however: “We are absolutely ready to reach out to the other side and explain things.”

I’ll keep contacting and adding Trump supporters as friends if they say yes, and I’ll report back as I go.