Decades from now, when the election of 2016 is distilled to its essence, what will that be? Many hoped the central lesson would be a shattered glass ceiling and a cementing of the Obama legacy. An expansion of rights and tolerance.

Instead, a small electoral majority chose a candidate who openly embraced bigotry, who slurred war heroes and mocked the disabled, who bragged of sexual assault, who said he’d roll back the protections of a free press, who was cheered on by white supremacists, who said he’d upend our alliances and the world’s long-overdue climate deal, and who is ignorant and cavalier about the basics of safeguarding a nuclear arsenal.

There is no way to sugarcoat it. The election of Donald Trump is a brutal affront to women, people of color, Jews and Muslims, and all who value kindness and tolerance. Paranoia and divisiveness won the day. If we feared that the Trump campaign would give white nationalists and other political predators a road map for a lasting presence as a disruptive opposition, we have instead handed them the keys to the Oval Office, and the nuclear codes.

In the horrible months leading up to the election, there were moments we all crossed our fingers and hoped the Trump campaign’s predilection for inflaming bigotry might, ultimately, improve the health of the body politic. Maybe he represented a high fever that, once broken, would leave us more immune to old hatreds. Maybe, just as videos of police shootings shoved the most heinous forms of structural racism into the social-media feeds of white America, so would the actions of Trump and his most virulent supporters cast a light on an ugliness that needed to be confronted to be at last overcome. 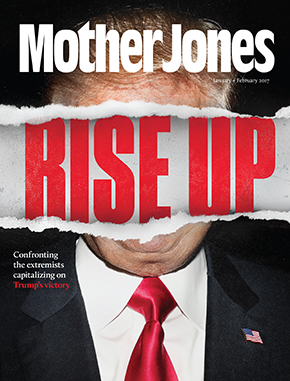 Except, it seems this ugliness was far, far more pervasive than we had let ourselves imagine. With every chant of “build the wall,” with every racist tweet, with every “Trump that bitch” T-shirt, his supporters hardened—to the horror of more than half of those who voted (and many who didn’t), and despite the entreaties of political, diplomatic, scientific, and economic experts.

It would be counterproductive to say, as some have, that all those who voted for Trump are stone-cold racists. People voted for him for various and complicated reasons. But it must be said that all who voted for Trump did not find naked bigotry and misogyny to be disqualifying. Some discounted it, and some thrilled to it. That is gutting.

The next weeks and months and years will be spent analyzing how we got here. It will be a grim accounting for every institution, and a painful airing of recriminations among families and friends.

As the author and comedian Baratunde Thurston put it, Trump’s campaign is best understood as a denial-of-service attack on our political system. Despite or perhaps because he is a thin-skinned, shallow narcissist, he instinctively found weaknesses in our national firewall. He knew that with 16 primary opponents, each would happily support his attacks on the manhood, looks, and dignity of the others, until it was too late and the momentum was on his side.

He realized that his bombastic, bigoted statements would be heralded by some corners of the media, mocked by others, and given wall-to-wall coverage by all. Newsroom traditions of putting separate teams of reporters on each candidate also helped ensure that Hillary Clinton’s email scandals were given the same weight as the mountain of evidence of Trump’s wrongdoing. The nation’s great newspapers and networks did vital work, but when it came to proportionality, they utterly failed. And the obsession with polling aggregators and fancy widgets, coupled with the failings of the polls themselves, lulled people into slacktivism, inaction, or even showy obstructionism.

And social media failed us most of all. Even as armies of Trump’s toxic trolls—some real, some bots—started harassing reporters, activists, and ordinary people with racist and anti-Semitic images and general filth, Twitter twiddled its thumbs. Even as Macedonian teens eager for ad revenue exploited Facebook’s algorithm by flooding the zone with fake news designed to appeal to Trump supporters, Facebook did nothing. Actually, it did do something: It repeatedly changed its algorithm and protocols in ways that may have enabled fake news. And oh yeah, the founder of virtual-reality pioneer Oculus went so far as to gleefully fund a “shitpost” factory to promote Trump. Deliberately or not, tech tools were used to pervert our political dialogue, and a good chunk of the tech elite either didn’t care or relished it in the name of “disruption.” Consider, too, that venture capitalist (and Facebook board member) Peter Thiel’s yearslong secret campaign to eviscerate Gawker Media took out the news organization best positioned to challenge the tech titans and root out organized trolling, just months before the election.

There is no way to sugarcoat it. The election of Donald Trump is a brutal affront to women, people of color, Jews and Muslims, and all who value kindness and tolerance.

Some—maybe a lot—of the social-media cesspool can be laid at the feet of Vladimir Putin, known for using similar tactics to destabilize Ukraine and other European countries. The Department of Homeland Security says Russia was behind the hack that allowed WikiLeaks to air the emails of Democratic National Committee officials, which enraged Bernie Sanders supporters. Days after the election, a former State Duma member linked to cyberattacks on Estonia said the Kremlin “maybe helped a bit with WikiLeaks.” A few days ago the CIA presented lawmakers with a new analysis: Putin had intervened in our election with the express intent of helping Trump and harming Clinton. The revelation prompted Trump to attack the CIA, which in turn helped prompt senior Senators of both parties to a call for a bipartisan investigation. How far back into the election cycle do fake news and organized disinformation go? And who is responsible for what? We don’t yet know, but in retrospect, those who shouted down concerns over Russian involvement as “neo-McCarthyism” might have better directed their fact-finding at these questions.

In any case, WikiLeaks and the trolls found fertile ground after 30-plus years of GOP Hillary hate, and in a country in as much denial about sexism as it is about racism. Trump was also aided by FBI Director James Comey and his bizarre letter to Congress that seemed to reopen the Clinton email investigation. Comey, for his part, may have been dealing with a clique of agents determined to keep digging into the allegations laid out in Clinton Cash, a book written by an editor at Breitbart News, the site that hails itself as “the platform for the alt-right,” whose former executive chairman, Stephen Bannon, is now one of Trump’s senior White House advisers.

And then there was Trump himself. He deftly wove fears of the left together with fears of the right. He stoked fear of loss in status, fear of economic marginalization, fear of the other. He never ever, not once, offered us anything but fear. He made all of us—even those who fought valiantly—smaller by dragging us into his swamp of hate and depravity.

And if we let him, he will continue to do so. The circular firing squads on the left have lined up. The reasonable right—and yes, many did distinguish themselves by repudiating Trump—is abandoned to an uncertain fate. Those who didn’t vote or protest-voted have all come under fire, as have those who helped champion Clinton.

Constructive postmortems are great. There’s a lot to chew on. But in the weeks following the election, the analysis has been dominated by hot takes based on incomplete exit poll data or ax-grinding to fit various agendas. That really needs to stop. There is no time, no room, no space to do anything but make common cause—on the left and beyond it—and push back against what, in part, this seems to be: not just a protest vote by rural whites who feel left behind, but the coming out of an authoritarian nationalist movement eager to stir racial discord. And the dawn of an era of nepotism and graft on a scale that could leave future historians gobsmacked.

This is a time when we’re called on to do things we may not have done before.

Authoritarian movements rise by dividing us and can only last so long as they do. My heart broke on election night to see my Twitter feed full of quotes like “I knew my country hated me, but I didn’t know how much,” or “I don’t recognize my country.” In the days after the election, there was a surge of hate crimes. Parents had to answer questions like: What will happen to my friends? What will happen to us? Why does he hate us?

This is a dark hour, and to say otherwise would be a lie. It is—by orders of magnitude—the worst electoral outcome our country has faced in many generations. But let us not forget those who have pushed back already. The women born before the passage of the 19th Amendment, who struggled against infirmity and efforts to suppress their vote to get to the polls. The myriad Latinos and Asian Americans who registered for the first time to repel the hate that too many whites voted for. The African Americans who stood up for equality at a far greater rate than any other group, as they always have.

Trump appealed to America’s worst impulses. Now it’s on all of us to show, to prove, that this is not all that America is. This is a time when we’re called on to do things we may not have done before. To face down bigotry and hate, and to reach beyond our Facebook feeds in trying to do so. To fight disinformation instead of meeting it with the same. To listen to the anxieties of Trump supporters and the critiques of allies and to learn.

As for those of us at Mother Jones, we will continue to do what we always strive to do: shine light into dark corners, expose abuses of power, call out cronyism and corruption, and, in the words of our namesake, fight like hell for the living.

We’ve got our work cut out for us. All of us.

This essay expands and updates an original version that was written on election night and can be found here.