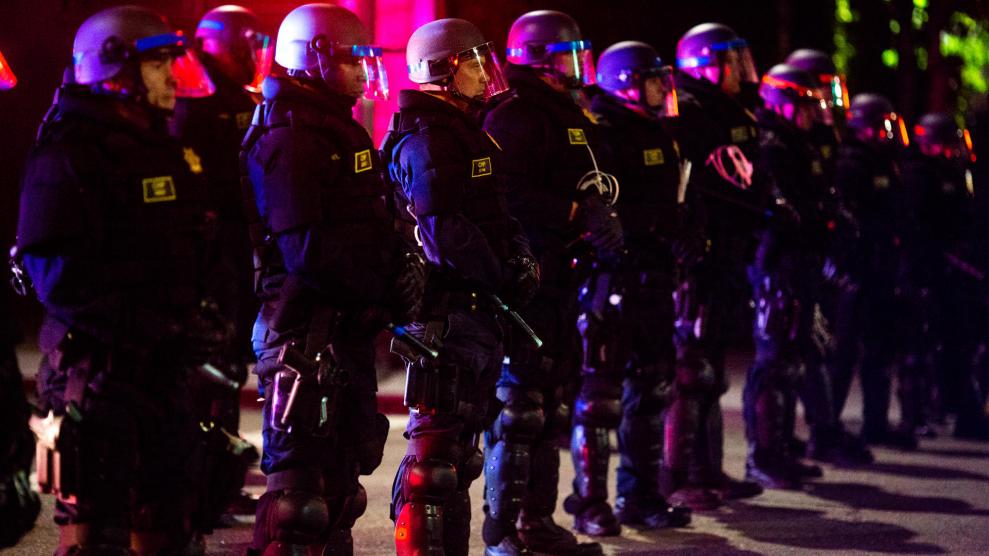 Update, 12/19/16: The Fraternal Order of Police has since added a note to the bottom of the list of policies saying that the document does not represent the FOP’s agenda and is not a advocacy document. “It is an advisory to our members as to what may happen when the new Administration takes over,” reads the statement.

Donald Trump didn’t earn too many endorsements from unions during his presidential campaign, but one enthusiastically supported him. The national Fraternal Order of Police (FOP), which boasts more than 330,000 members and is the country’s largest police union, announced in September that it would be backing Trump because he “understands and supports” its priorities. (The organization declined to make a formal endorsement in the 2012 presidential election but in 2008 backed John McCain.) Trump’s rhetoric on safety and law and order seemed to align with the right-leaning union. “Our members believe he will make America safe again,” the group explained when it announced its support. About a week after Election Day, it offered the president-elect a list of its priorities for the first 100 days of his administration.

The policy ideas, released through the union’s official website with little fanfare, includes more than a dozen proposals. Many involve aggressively dismantling the modest reforms suggested by the Obama administration in a 2015 plan called President’s Task Force on 21st Century Policing, such as increasing the use of body cameras nationwide and implementing a national database on police use of force. The FOP also wants Trump to bring back racial profiling in federal agencies by lifting or changing the 2003 ban put in place by the Bush administration. The union suggests he should cut off some or all federal aid to “sanctuary cities” and bring an end to Deferred Action for Childhood Arrivals (DACA), using its database to deport the individuals who had been protected by being included in it. Using police officers to participate in the deportation of undocumented immigrants was an idea Trump suggested in his immigration speech in Phoenix, Arizona, last August. Several large cities have indicated they will not use police officers or relinquish their status as sanctuary cities to help deport immigrants.

The Fraternal Order of Police’s resistance to change and embrace of Trump and his policies is directly at odds with police officers of color and other cops who believe law enforcement agencies need to reform to better serve all Americans. The Blacks in Law Enforcement of America opposed the FOP’s endorsement of Trump, writing, “Is this endorsement the result of a few individuals who may stand to benefit from [a] so-called law and order candidate who knows nothing about the Criminal Justice System and is opposed to necessary reform of the institution?” Civil rights groups have criticized the FOP’s priorities. “The FOP’s agenda for Trump’s first 100 days is abhorrent,” the Advancement Project, a civil rights organization based in Washington, DC, wrote on Twitter. Changing the way police officers serve their communities has been a high priority for many politicians and activists alike and some gains have been made, but if the FOP’s proposals can further influence the Trump administration, police reform may get a lot more difficult.