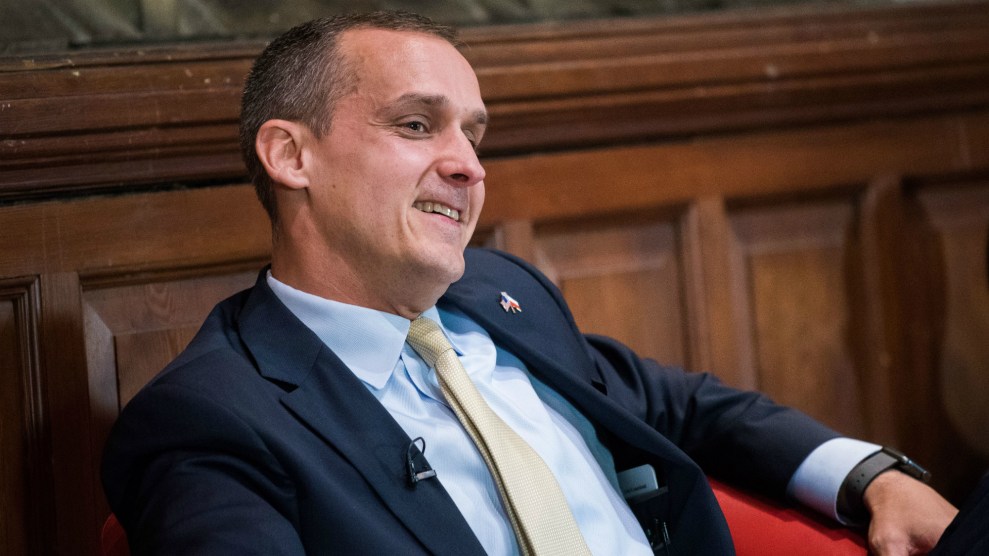 In February, Corey Lewandowksi, who was then Donald Trump’s campaign manager, was interviewed by Trump’s future campaign chairman (and now senior White House adviser) Stephen Bannon about the role lobbyists play in Washington. Lewandowski’s response was unambiguous and venomous. Trump’s election, he declared, would mark the end of influence-peddling by political insiders. Here’s how he put it:

This is the fundamental problem with the ruling class in Washington, DC—the party bosses, the K Street crowd, the lobbyists who control all these politicians. They will do anything to maintain their power. They will do anything. They will say anything. They will spend whatever it takes because they know that if Donald Trump becomes the nominee and ultimately the president of the United States, the days of backroom deals are over. He will only be responsible to the American people. And so what you have is a series of people who’ve made a very, very good living by controlling politicians through their donations and making sure they get the legislation done—or not done—in Washington, DC to best benefit their clients. And those days are coming to an end.

But maybe not just yet.

On Wednesday morning, Lewandowski announced that he and another former Trump campaign veteran, Barry Bennett, are opening up a lobbying and political consulting firm in the swamp their ex-boss vowed to drain.

Without a hint of irony, the first sentence of Lewandowski’s press release points out that his offices will be just one block from the White House. He didn’t note that this is also one block from K Street, the ground zero of Washington influence-peddling, or Swamp Central. The next sentence touts Lewandowski’s close relationship with Trump. As in, we’re going to cash in on my insider connection to the guy in the White House.

For Lewandowski, this is actually a return to lobbying. As Mother Jones reported in March, Lewandowski was a registered lobbyist in the mid-2000s. In fact, Lewandowski lobbied for green energy subsidies. (One of his former clients told Mother Jones that Lewandowski was helpful to the funding of a publicly owned solar project in Massachusetts.) And he did this, as he headed up the New Hampshire chapter of government-bashing Americans for Prosperity.

It’s not clear if Lewandowski will once again register as a lobbyist. The firm’s announcement describes it as a full-service government relations and political consulting firm. But even if he sticks to the “consulting” side of things, his new gig might still make Trump campaign reunions awkward. On Tuesday, Kellyanne Conway, who led the Trump campaign in its final months, lashed out at Washington culture and “political consultants” in particular.