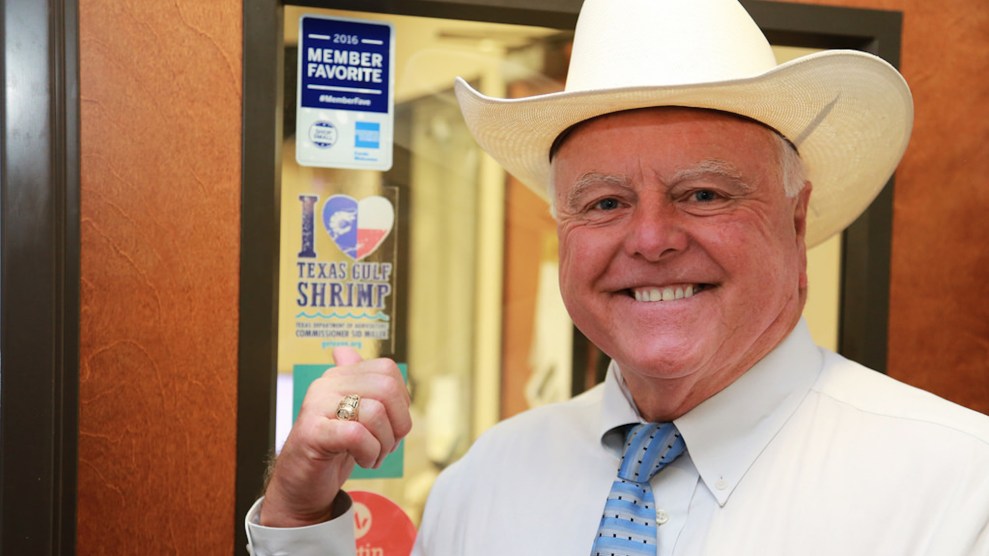 Update (12/22/2016): On Thursday, yet another USDA candidate emerged: Elsa Murano, director of the Norman Borlaug Institute for International Agriculture at Texas A&M. She is no stranger to the revolving door between industry and regulatory agencies. In 2004, Murano stepped down from her post as chief of the USDA division that oversees food safety at the nation’s slaughterhouses. Two years later, she joined the board of directors of pork giant Hormel, a company that runs some of the nation’s largest slaughterhouses. She has held that post ever since, with annual compensation of $237,980 and stock holdings worth $2,484,262 as of 2015. She served as president of Texas A&M in 2008 and 2009, before resigning under pressure from associates of then-Gov. Rick Perry, Trump’s choice to direct the Department of Energy. She is scheduled to meet with Trump next week.

Update (12/21/2016): Another contender to the USDA throne has emerged: Bruce Rastetter, CEO of the sprawling Summit Agriculture Group, a major Iowa pork and ethanol producer with interests in Brazil. His name was bandied about often as a USDA pick just after the election but the buzz around him quickly dissipated. That changed on Tuesday, when he visited the gilded halls of Trump Tower. Rastetter is the main political patron of Iowa Gov. Terry Branstad, whom Trump recently named US ambassador to China. I teased out the tangled Rastetter-Branstad relationship here. Like Miller, he served as a member of Trump’s agricultural advisory committee. Hat tip, Bleeding Heartland blog.

Update (12/21/2016): Texas Agriculture Commissioner Sid Miller’s below-mentioned paean to Donald Trump appears to have won him an invitation into what he called the “golden lobby of Trump Tower”—Miller is planning a trip to Manhattan during between Christmas and New Year’s to meet with the transition team, his spokesman told The Texas Tribune. But just because he will get to bask in what he also called the “new symbolic representation of power in America” does not mean he’s a shoo-in to take the USDA post; now he has some stiff competition from his home state. Susan Combs, who has served as both Texas Ag Commissioner and comptroller over the past decade, has emerged from nowhere as a hot candidate, endorsed by U.S. Rep. Mike Conaway (R-Texas), chairman of the House Agriculture Committee, the Tribune and Politico report. Politico adds that Combs is getting pushback from “some Lone Star State conservatives,” who see her as insufficiently conservative.

President-elect Donald Trump has made some mind-bending Cabinet picks, tapping a Big Oil CEO to lead foreign policy, a former pro wrestling magnate as head of the Small Business Administration, and a raunchy burger tycoon from a company with a history of worker wage disputes as head of the Labor Department. But one Cabinet slot remains open: secretary of the US Department of Agriculture, a sprawling agency with more than a $150 billion budget that directs farm and hunger policy.

Miller predicts that “not only will Donald Trump defy his critics, befuddle his opponents and become one of our greatest presidents, but he will fulfill his promise to Make America Great Again.”

Last last week, I posted an update about the chaos surrounding Trump’s USDA transition. Since I filed that piece, some fascinating new information has emerged. Here’s a rundown of why another wild-card pick might be on the way:

• During his campaign, Trump assembled a 60-plus-person band of right-wing farm state pols, agribiz flacks, and donors to serve on what he called his Agricultural Advisory Committee. Texas Agriculture Commissioner Sid Miller is one its highest-profile members. On the national scene, he’s most famous for (1) unapologetically sharing fake news stories on his office’s Facebook page; (2) calling Hillary Clinton a “cunt” on on Twitter; and (3) trying to bill his state’s taxpayers for a trip to take a medical procedure called a “Jesus shot.”

In what Politico described as a “Hail Mary attempt” to assert himself as a candidate to take the USDA helm, Miller released a fulsome love letter to Trump Friday in the form of an op-ed piece. “The focus is now the golden lobby of Trump Tower, the new symbolic representation of power in America: an edifice built by sharp-edged business acumen and cold American cash rather than taxpayer dollars and political pork,” Miller opines.

At the start of the piece, Miller predicts that “not only will Donald Trump defy his critics, befuddle his opponents and become one of our greatest presidents, but he will fulfill his promise to Make America Great Again.” By the end, Miller is ready to go further: “In just over one month Donald Trump has already kept the pledge written on thousands of red caps across the America: He has already Made America Great Again.”

• Just a little over a week ago, Trump seemed close to choosing a centrist Democrat from a farm state as USDA chief—a surprisingly tame pick for this crew. It would also have been diabolically smart, because if Sen. Heidi Heitkamp (D-N.D.) could have been persuaded to take the post, it would quite likely have meant increasing the GOP majority in the Senate by one seat, since a Republican would likely have won a special election to replace her. But then Politico reported last Monday that “Trump’s closest rural advisers are trying to torpedo efforts” to appoint Heitkamp, and the post has been in limbo ever since.

Since then, the San Antonio Express News‘ Lynn Brezosky has added some excellent perspective on what happened. She got a hold of an email from one of Trump’s ag advisers, high-powered DC attorney Gary Baise. (Baise confirmed the authenticity of the email, Brezosky reports.) Baise is a significant figure in Trump World—he’s  the man who takes credit for putting together the Agricultural Advisory Committee on which the above-mentioned Miller sits. Baise represents Big Ag interests for the law firm and lobbying house Olsson Frank Weeda Terman Matz, and serves as policy expert for the Heartland Institute, an oil industry-funded think tank that denies man-made climate change.

In his email, which went out to the transition team as well as members of the ag advisory group, Baise declares:

Politico just put this story out regarding the delay in selecting a USDA Secretary. All of you need to know that I have been advised that a person on the Trump transition team believes “I” have been causing problems regarding the USDA Secretary selection. I have been told indirectly to “back off”!!!! Rest assured I will not. I am speaking and reflecting you, Mr. Trump and agriculture’s best interests not some politically correct solution. President–Elect Trump did not win by being politically correct!

The “politically correct solution” he’s referring to appears to be choosing Heitkamp. Baise goes on to call for a USDA chief who “supported Mr. Trump and did not oppose him or offer lukewarm support,” and who is “not a Tom Vilsack type” (a reference to the current USDA secretary).

• San Antonio Express News‘ Brezosky goes on to report that members of Trump’s advisory committee “say they had been promised a seat at the table on agricultural policy,” and Baise’s email represents their effort to promote themselves. Meanwhile, Politico reports that Charles Herbster, chairman of that committee, remains a contender to become Trump’s USDA pick. Citing a a “source close to the transition,” Politico reports that Herbster “managed to stay under the radar as he made his way to New York last week to meet with Trump transition officials,” though “he doesn’t appear to have spoken directly to the president-elect.” The news site adds:

Still, the fact Herbster was summoned to NYC suggests he remains very much in the mix. In many ways, Herbster would make sense: He’s a businessman from one of the country’s biggest farm states who was a key rural backer for the loyalty-loving Trump during the campaign. His dearth of government experience, which would likely be a detriment in any other administration, could fit into Trump’s swamp-draining pledge.

Herbster would be a fascinating drain-the-swamp pick. As I reported in August, he is a major funder of a super-PAC called Ag America, and he even sits on its steering committee. According to the money-in-politics tracker Open Secrets, he donated $60,000 to it in 2015. Other recent contributors include Monsanto, DuPont, Archer Daniels Midland, and several other agribusiness giants. He also runs a multilevel marketing operation—one of those companies like Avon, Amway, or Herbalife that sell their products to the public through a network of individual “distributors” who make money not just based on their own sales, but also from the sales of others they’ve managed to recruit. More here.

Meanwhile, as Christmas approaches, we all anxiously await word of whom our Great Leader will choose to oversee ag and hunger policy.