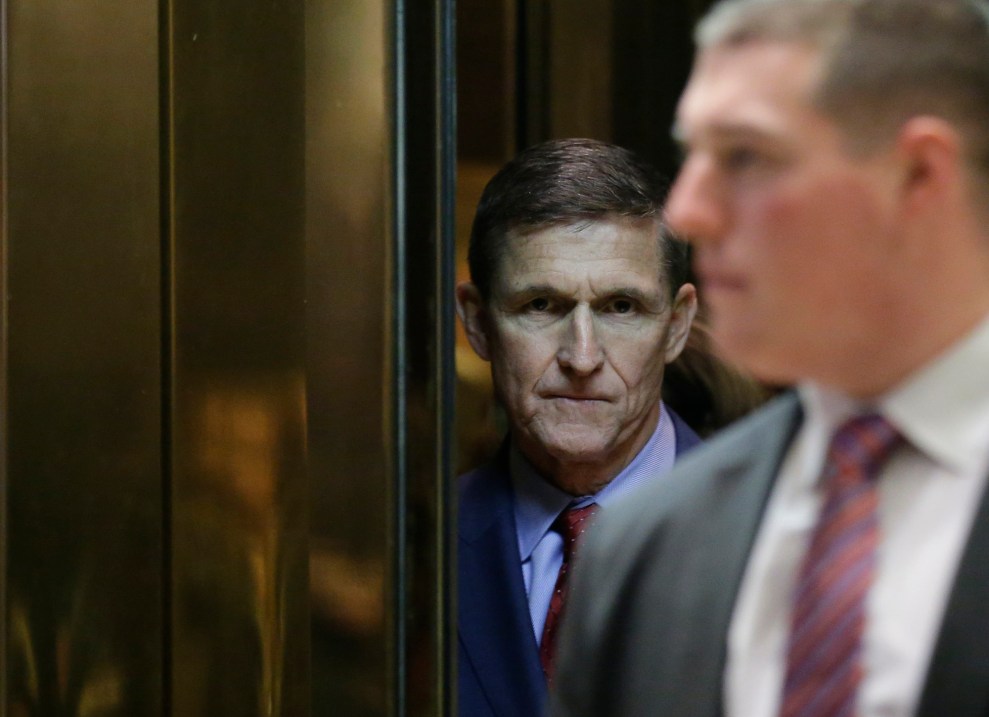 Months before Donald Trump tapped retired Lt. General Michael Flynn to be his national security adviser, the military officer, who had been fired by the Obama administration, appeared on stage at the Republican National Convention urging the audience to chant “lock her up”—the now infamous shorthand among Trump supporters calling for the prosecution of Hillary Clinton for her use of a private email server.

“Lock her up!” Flynn told the crowd. “You know why we’re saying that? If I did a tenth of what she did, I would be in jail today.”

Months later, a new report on Wednesday from the Washington Post appears to contradict Flynn’s bold claim that he would be imprisoned for a lesser offense. According to a secret U.S. Army investigation, it was determined in 2010 that Flynn improperly shared classified information with foreign military officers, despite lacking the proper security credentials to do so. It’s unclear what exactly the information was, but officials told the Post that Flynn was accused of leaking information about the CIA to allies. The Army inquiry never resulted in a punishment because it found Flynn did not “knowingly” share the secret information. (He was later fired as the director of the Defense Intelligence Agency for his chaotic management style.)

The newly unearthed record comes amid growing concern over Flynn’s fitness for the job, the sensitive position of national security adviser—which does not require any confirmation hearings—and the president-elect’s recent refusal to receive presidential intelligence briefings. “You know, I’m like a smart person,” Trump said in defense of his decision to skip the meetings. On Thursday, a spokesman for Trump’s transition team said that he is now getting the briefings three times a week but meets with Flynn daily.

Since he was announced as Trump’s choice for national security adviser, Flynn has come under fire for his public support of debunked conspiracy theories, public support of Russia, and calls to bring back torture methods. Flynn’s son, Michael Flynn Jr., shares the same affinity for conspiracy theories and was swiftly fired last week for tweeting about #Pizzagate, the baseless theory accusing Hillary Clinton of secretly running a child sex-trafficking business in the basement of a D.C. pizza parlor. Shortly after the Post report on Flynn’s inquiry was published, his son tweeted the following:

Trump is expected to meet with Jeff Bezos, the founder of Amazon and owner of the Post, among other tech leaders later today.