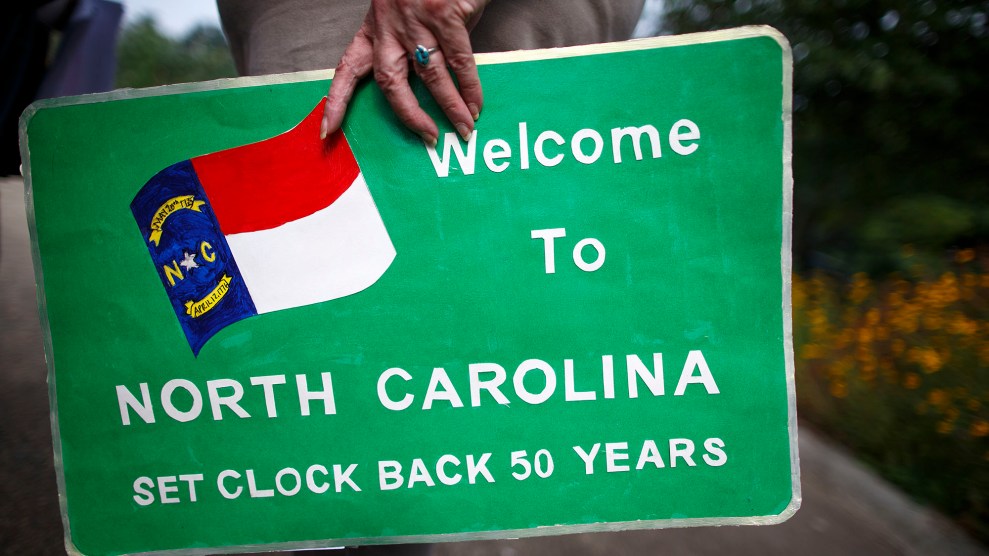 A month after losing control of the governorship, Republicans in North Carolina on Wednesday launched a brazen power grab to deprive the state’s incoming Democratic governor of the ability to control much of the state government, from the election board to the governor’s own Cabinet.

After calling a surprise special session with just a few hours’ notice, Republicans in the Legislature introduced a series of bills that would strip the next governor, Roy Cooper, of the power to control the state’s election boards and to appoint University of North Carolina trustees, and would give the state Senate veto power over his Cabinet picks. The legislation would drastically reduce the number of political appointees the new governor can hire and fire, meaning Cooper would not be able to replace more than 1,000 political appointees of the outgoing administration. If passed, the legislation would undermine the results of the gubernatorial election by severely weakening the office of the governor.

“It appears this fourth special session will be to nullify the vote of the people for governor,” state House Minority Leader Larry Hall said.

Among its biggest consequences, the bill would effectively place election administration in Republican hands. Under current law, three of the five positions on the state board of elections are controlled by the governor’s party. But under the proposed legislation, the board would be merged with the state Ethics Commission and each party would get an equal number of appointees. Democratic appointees would chair the board in odd-numbered years and Republican appointees would lead in even-numbered years. Since federal and major state elections take place in even-numbered years, this ensures that the board would be led by Republicans during major elections. Under the bill, county election boards would also shift from control by the governor’s party to an equal partisan split.

Republicans are describing their proposed structure as “nonpartisan” and “completely balanced,” but the effect of equal partisan representation is gridlock, which would empower one party to block any attempt to expand access to the ballot, for instance through more early voting or a greater number of precincts. Republicans in North Carolina have repeatedly attempted to limit early voting and have successfully cut down the number of early-voting precincts in heavily African American counties. Figures show that these suppression tactics serve to lower black turnout.

The incoming governor, Cooper, rebuked Republicans during a press conference Thursday morning, saying, “These are the kinds of issues that should be brought forth in a long session instead of being passed…in the dark of night.”

Other critics have been harsher in their condemnation. “The rest of the country can see you, @NCGOP,” tweeted MSNBC correspondent Joy Reid. “What you’re doing is reprehensible and undemocratic—a naked grab for permanent power.”

Republicans in North Carolina are in a precarious position. The state, which in recent history has leaned Republican, has become more of a toss-up thanks to an influx of young and minority voters. Rather than moderate or reach out to the state’s growing progressive population, Republicans have passed a series of right-wing measures, including the so-called bathroom bill to strip civil rights protections from LGBT people, that have had the effect of hastening Democratic gains in the state. In order to mitigate their waning political popularity, Republicans have gerrymandered legislative districts and passed an unconstitutional voter suppression law to weaken the voting power of African Americans and other Democratic-leaning voters. But these unpopular moves have clearly had consequences, as demonstrated last month when incumbent Republican Gov. Pat McCrory lost his reelection race to the Democrat, even as Donald Trump won the state.

Republicans in North Carolina have been loath to give up any power. McCrory waited almost a month to concede the election, making allegations of fraud that Democrats feared would be used by the Republican-controlled Legislature to overturn the election results and give McCrory a second term under a little-known provision of North Carolina law. McCrory fought for thousands of ballots to be thrown out but eventually conceded last week.

Democrats have also feared a court-packing scheme in the final days of McCrory’s administration. Republicans lost a state Supreme Court race in November, prompting rumors of a court-packing scheme that would add more seats to the state’s highest court. That would allow Republicans to make appointments that would essentially nullify the will of the voters who handed Democrats a majority on the court. That bill has not been introduced at this time, but Wednesday’s surprise bill demonstrates that Republicans are serious about a last-ditch effort to hold onto power and minimize the effects of the election.

The Republican actions could run into trouble if any legislation passes and is challenged in court. State lawmakers were called back to Raleigh for a series of special sessions to pass disaster relief measures following Hurricane Matthew and wildfires. Then Republicans convened an additional surprise session to introduce these bills—an action that state Democrats say violated the constitutional procedures for calling a special session. If a court agrees with the Democrats, that could invalidate legislation passed during the session.

Election law expert Rick Hasen noted that some of the legislation could itself violate federal law and the US Constitution. “I could see potential Voting Rights Act and federal constitutional challenges here,” he wrote on his blog, “in part because the Legislature would potentially be diluting minority voting power and making minority voters worse off, just at the time that their candidate of choice (Gov. Cooper) is poised to assume power.”