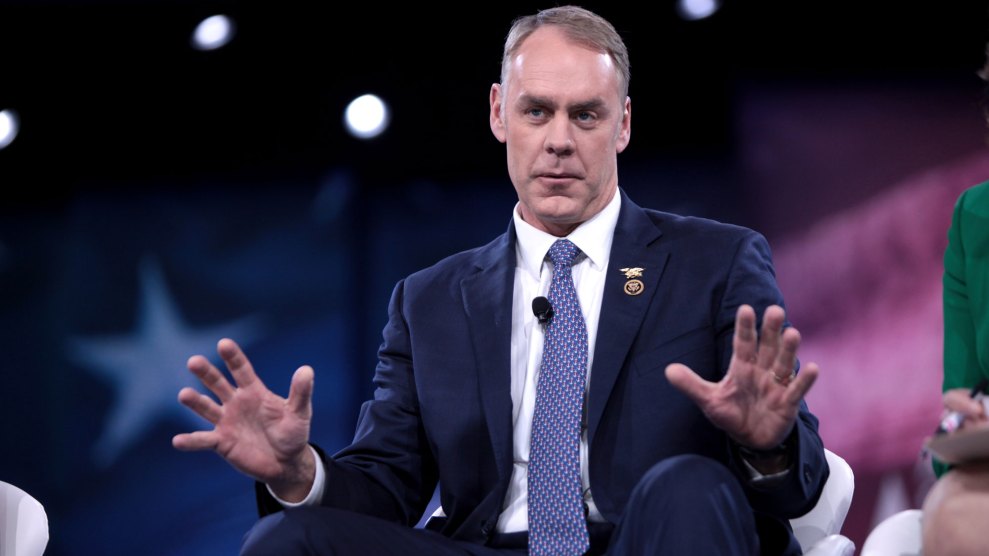 On Friday the Wall Street Journal reported that Donald Trump was set to appoint Rep. Cathy McMorris Rodgers (R-Wash.) to head the Department of the Interior. But Trump being Trump, by Tuesday he’d evidently had a change of heart, and instead of the chair of the House Republican Conference, he settled on a new name—Montana Rep. Ryan Zinke (R), an ex-Navy SEAL who was one of Trump’s biggest supporters during the campaign.

The choice of Zinke, who once referred to Hillary Clinton as “the anti-christ,” makes some sense. He is a geologist, and as the at-large representative for a rural Western state, his work has focused in large part on public lands, natural resources, and tribal issues—the primary responsibilities of the Interior Department. But Zinke has also demonstrated a pointed skepticism about climate change.

It wasn’t always that way. In 2010, as a member of the Montana Legislature, he signed on to a letter calling global warming “a threat multiplier for instability in the most volatile regions of the world” and arguing that “the clean energy and climate challenge is America’s new space race.” The letter warned of the “catastrophic” costs and “unprecedented economic consequences” associated with failing to act on climate change and asked President Barack Obama and then-Speaker of the House Nancy Pelosi to push through sweeping climate and clean-energy legislation.

That was then. But Zinke rose through the ranks of Montana Republicans with big support from the less clean corners of the energy industry and has been singing a different tune ever since. By the summer of 2014, when he was running for his first term in Congress, he said he’d seen no evidence that rising CO2 levels affected the climate. “It’s not a hoax, but it’s not proven science either,” he said at one debate. By 2015, he’d fully reversed himself, reportedly telling a reporter from PBS that climate change did not present a national security threat—nor was it even man-made.

A few months later, he’d staked out yet another position in an interview with the Bozeman Daily Chronicle. “I think without question the climate’s changing—it has always changed, but it is changing,” he said. “If you go up to Glacier Park, you have your lunch in one of the glaciers, you’ll see the glacier recede while you eat lunch. So I have seen the change.” But, he added, he couldn’t speak to what exactly was causing those changes, and he expressed his skepticism about existing climate models. He chastised the president for connecting Superstorm Sandy to global warming.

“I think we need to be prudent,” he said. “If we’re playing Russian Roulette and there’s a one in—say you’ve got a six shot [gun]. You have a one-in-six chance of that chamber being a loaded bullet, and you spin it. Are you gonna put it to your head and pull the trigger? So even if there’s a one-in-six chance of global warming and it’s a catastrophe, then I think you need to be prudent.”

But he left little secret then or since about what he believed the government’s real priority should be—encouraging domestic energy development, specifically in oil, gas, and coal.

Zinke, has described himself as a “conservationist” in the mold of Theodore Roosevelt, specifically citing the ex-president’s creed that “conservation means development as much as it does protection.” In his 2016 book, American Commander, he rails against efforts to get the Interior Department to protect the Sage Grouse, complains about environmentalist opposition to the Keystone XL pipeline, and laments that oil companies have been unfairly targeted with fines for “the alleged death of a handful of ducks.”

Maybe Zinke’s 2010 environmentalist alter-ego will return after his confirmation hearings, but don’t bet on it.