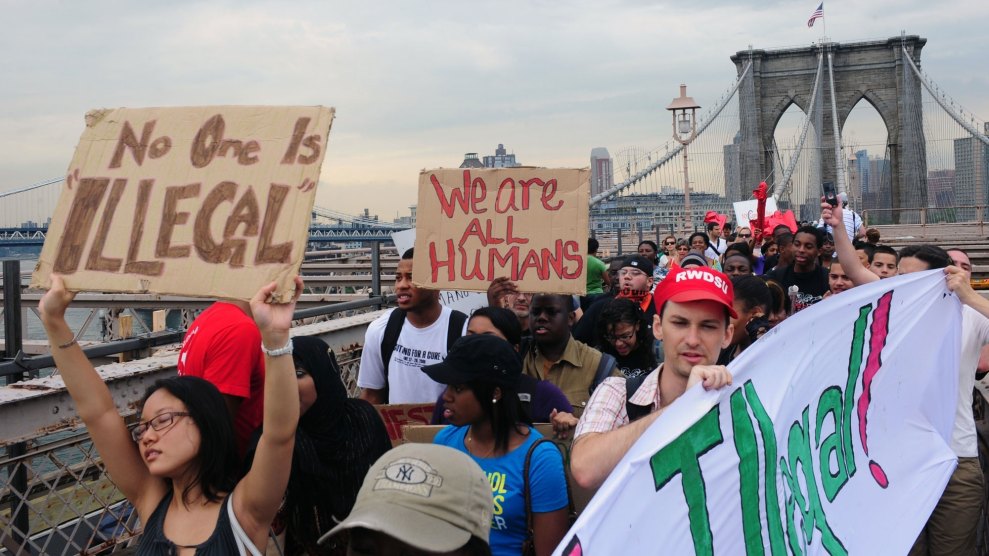 President-elect Donald Trump still has about two months to go before he is inaugurated, but pockets of resistance to his mass immigrant deportation plan are already emerging across the country. Since his election, local officials in at least 18 major “sanctuary” cities have pledged to limit their cooperation with federal immigration officials. By one estimate, 12 of these cities account for roughly 20 percent of all undocumented immigrants in the United States.

“We have been and always will be a city of refuge, a city of sanctuary, a city of love,” said San Francisco Mayor Ed Lee.

There are at least 364 counties that limit their cooperation with federal immigration authorities, including 39 cities. For years, these sanctuary cities have resisted federal deportation efforts in different ways. Some jurisdictions have policies that prevent police officers from inquiring into the immigration status of residents; in other locales, jails have refused to comply with requests from the feds to hold suspected undocumented immigrants past their scheduled release dates. Immigration advocates argue that that these tactics encourage immigrants in their communities to report crimes or cooperate with police investigations.

But critics of sanctuary cities, like Trump, say these policies run contrary to federal immigration law and risk releasing criminals onto the streets. In fact, the term “sanctuary city” has become so politicized that many jurisdictions have hesitated to accept the label. (It is worth noting that evidence suggests sanctuary cities are actually safer for local residents.)

Trump has vowed to stomp out such local resistance by cutting off federal funding to any sanctuary city. That would mean that in a worst-case scenario, these jurisdictions risk losing anywhere between 1 percent and 25 percent of their total city budgets, depending on how much they rely on federal funds. However, a Trump administration may decide not to withhold all that funding. The Los Angeles Times reported that Trump’s advisors are considering specifically targeting law enforcement funding.

Here are some of the metros that have renewed their resistance to federal deportation efforts since the election—in order of what percent of their budgets they stand to lose if Trump stays true to his threats:

District of Columbia
At risk: 25 percent of its city budget.

DC risks more of its budget than any other jurisdiction on this list. A week after Trump’s election, Mayor Muriel Bowser reaffirmed that DC would remain a sanctuary city by keeping in place its policy of preventing city employees and police officers from asking residents about their immigration status. DC also grants driver’s licenses and other benefits to undocumented immigrants.

San Francisco
At risk: More than 10 percent of the city budget, amounting to about $1 billion total.

San Francisco has put in place some of the most expansive sanctuary city laws in the country. In fact, the city has been at the center of the sanctuary city debate ever since 2015, when a young woman was killed by an undocumented Mexican immigrant who had reportedly been deported five times and had just been released from the sheriff department’s custody. Trump repeatedly drew attention to the case during his campaign. After Trump’s election, Mayor Ed Lee and the school district and sheriff’s office, among others, pledged to abide by San Francisco’s current policies. “We have been and always will be a city of refuge, a city of sanctuary, a city of love,” Lee said. According to the San Francisco Chronicle, the city attorney is looking into the possibility of suing the federal government should it withhold funds.

Chicago
At risk: At least 10 percent of the city budget, totaling more than $1 billion.

According to the Chicago Tribune, should Trump choose to target law enforcement funding, the city could stand to lose nearly $29 million per year in justice grants. Chicago Mayor Rahm Emanuel vowed that Chicago “always will be a sanctuary city.” He added, “To all those who are, after Tuesday’s election, very nervous and filled with anxiety as we’ve spoken to, you are safe in Chicago, you are secure in Chicago, and you are supported in Chicago.”

Providence does not refer undocumented immigrants charged with low-level civil infractions to federal immigration authorities. Mayor Jorge Elorza, the son of Guatemalan immigrants, does not consider Providence a sanctuary city, but he did declare in a statement, “We are standing with cities like Los Angeles and New York City who have made it clear that we will not sacrifice a single resident and we will continue to protect our communities.” He added, “It is important that every resident can live their lives without fear of being persecuted.”

Justice Department funding, the most vulnerable to attack, amounted to about $5.4 million last year. The Denver Police Department released a statement in the wake of Trump’s election saying it does not plan to participate in federal immigration enforcement.

New York
At risk: About 9 percent of the city budget, totaling just over $7 billion.

Mayor Bill de Blasio has called Trump’s threats against so-called sanctuary cities “dangerous.” He said, “We are not going to sacrifice a half million people who live among us, who are part of our community. We are not going to tear families apart.” Should Trump choose to target law enforcement funding, the city’s police department budget is less vulnerable than the overall city budget. Just over 3 percent, or $185 million, of the police budget comes from federal aid.

Baltimore
At risk: About 8 percent of the city’s budget, or more than $216 million

Baltimore Mayor Stephanie Rawlings-Blake reaffirmed that the city police will continue its policy of not asking about a person’s immigration status, stipulating that she considers Baltimore a “welcoming city” but not a “sanctuary city.”

Oakland, California
At risk: A rough estimate suggests that at least 4 percent of the city’s funds, or $52 million. (The Oakland City Administrator’s Office did not respond to our request for a specific breakdown of the budget.)

Oakland Mayor Libby Schaaf wrote in an op-ed that Oakland will “proudly stand as a sanctuary city—protecting our residents from what we deem unjust federal immigration laws.”

Minneapolis
At risk: 2 percent of the city budget—more than $25 million.

The police department stands to lose about $2.1 million in federal funding, or about 1.4 percent of its budget. Responding to Trump budget threats, Mayor Betsy Hodges said, “In his quest to scapegoat immigrants, Donald Trump has threatened cities’ federal funding if we do not change this practice. I repeat: I will continue to stand by and fight for immigrants in Minneapolis regardless of President-elect Trump’s threats.”

Los Angeles
At risk: About 2 percent of the city’s budget, or $507 million.

This year, Los Angeles is expected to receive $127 million in federal law enforcement grants. LA became one of the country’s first sanctuary cities, if not the first, back in 1979. Los Angeles Police Chief Charlie Beck declared that his department will not “engage in law enforcement activities solely based on somebody’s immigration status.”

Santa Fe, New Mexico
At risk: About 2 percent of the city’s annual budget, or about $6 million in federal funding.

The city’s police department relies on federal funding for just 0.25 percent of its budget, or about $62,000. Santa Fe Mayor Javier Gonzales vocally denounced Trump’s proposed policy toward sanctuary cities on Fox and CNN, earning him the title of the latest “public face of ‘sanctuary cities.’” He called Trump funding threats “dangerous.”

Aurora, Colorado, and Seattle:
At risk: About 1.8 percent of each city’s total budget and 2 to 3 percent of Seattle’s police budget.

Seattle Mayor Ed Murray said that standing by his city’s policies is “the most American thing we could possibly do.”

Portland Mayor-elect Ted Wheeler said, “We’re saying that we’re willing to sacrifice those dollars and we are willing to live with whatever consequences may come our way.”

Other cities that have vowed to restrict their participation in Trump’s mass deportation plan include Philadelphia, Boston, Newark, and Austin.