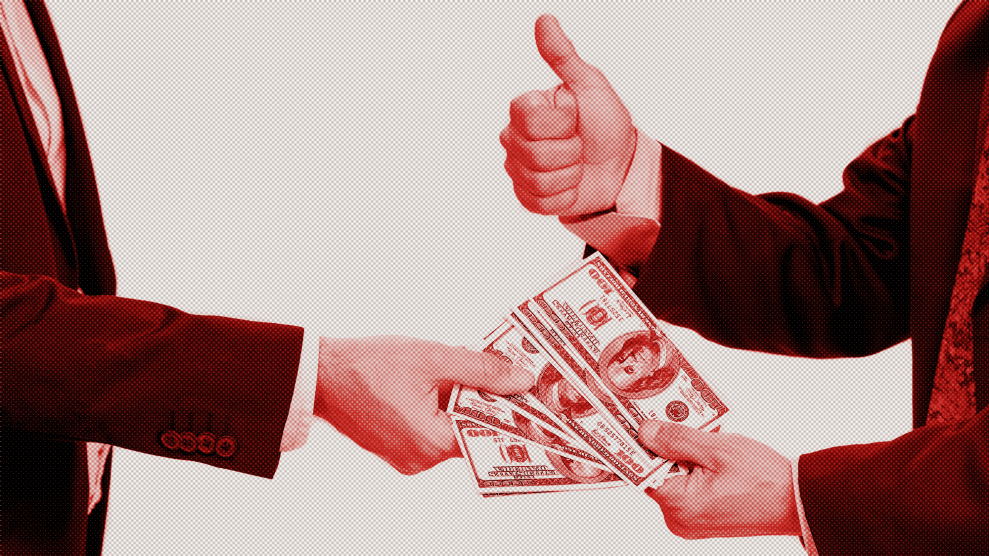 As he’s packed his proposed Cabinet with wealthy white men, President-elect Donald Trump has been criticized for assembling an administration that doesn’t look like America, much less the “forgotten men and women” on whose behalf he claimed to have campaigned. But perhaps it’s not too surprising that a Trump White House will represent the people who really bankroll American politics.

“Whose Voice, Whose Choice?”, a new report published today by the progressive think tank Demos, provides a remarkably detailed examination of who funds our elections and how this small, elite “donor class” exerts outsize influence on presidential and congressional politics. “Though history will consider 2016 one of America’s most extraordinary elections, one thing remained unchanged: Presidential donors were white, male and wealthy,” the report’s authors write.

“Though history will consider 2016 one of America’s most extraordinary elections, one thing remained unchanged: Presidential donors were white, male and wealthy.”

The report’s revealing findings is based on a unique methodology. It’s virtually impossible to identify the demographic details, much less the ideological preferences, of large groups of donors using the campaign finance data collected by the Federal Elections Commission. To complete their analysis, the report’s authors—Sean McElwee, a policy analyst at Demos, and Brian Schaffner and Jesse Rhodes, both political scientists from the University of Massachusetts-Amherst—cross-referenced FEC data with surveys conducted by the Cooperative Congressional Election Studies and personal records compiled by Catalist, a data vendor.

Clinton and Trump’s donors are indicative of a larger trend. The people who give the most to campaigns—and who have the most influence on candidates—are not representative of America at large. For example, Demos found that while people with a net worth of $1 million make up a small chunk of the population, they make up nearly one-quarter of all Democratic and Republican donors. Millionaires made up 41 percent of the donors giving $5,000 or more to Republican presidential campaigns in 2012.

The skewed demographics of campaign donors also extends to race and gender. While they comprise less than one-third of the adult population, white men made up 45 percent of federal campaign donors between 2008 and 2014. All together, they gave 57 percent of all campaign donations. In contrast, women and people of color are noticeably underrepresented in the donor pool.

The effect of these trends, the Demos report argues, has profound effects on our national political priorities. Because women, people of color, and the working class are underrepresented as donors, politicians are more likely to ignore their preferences. Meanwhile, the most influential donors are more supportive of conservative policies that are not embraced by the population as a whole (and vice versa).

This “opinion gap” between donors and nondonors has distorted economic, social, and environmental policy. It’s also compounded by Republican donors’ tendency to be more conservative than Republican voters in general. For example, as McElwee has written in Mother Jones, Republican voters are far less skeptical about taking action to fight climate change than the big donors who have the ear of GOP lawmakers.

The Demos report examines the ideological gulf between donors and nondonors on several issues where Trump and Republican lawmakers have promised swift action, including cutting taxes and federal spending, implementing Rep. Paul Ryan’s budget plan, and deregulating Wall Street. The discrepancy can also be seen in survey data about support for Obamacare when it was introduced in 2010: Across every demographic group, nondonors were more likely to support health care reform than donors. Here, too, you can see how the opinions of white, male, and wealthy donors were out of step with those of a broader slice of Americans.

Presumably, as Trump and congressional Republicans push the total repeal of Obamacare in spite of many of its provisions’ popularity, this gap between donors’ preferences and the public’s will persist.

The authors of the Demos report conclude that their analyses “sharply underscore how the big-money system is skewing our democracy in favor of a small, homogeneous minority, whose interests diverge substantially from the preferences and needs of ordinary Americans.” Their report presents plenty of new evidence that the current system of campaign finance caters to the few under the guise of “free speech” while effectively silencing the many. There’s much more data and analysis in the full report: Read it here.