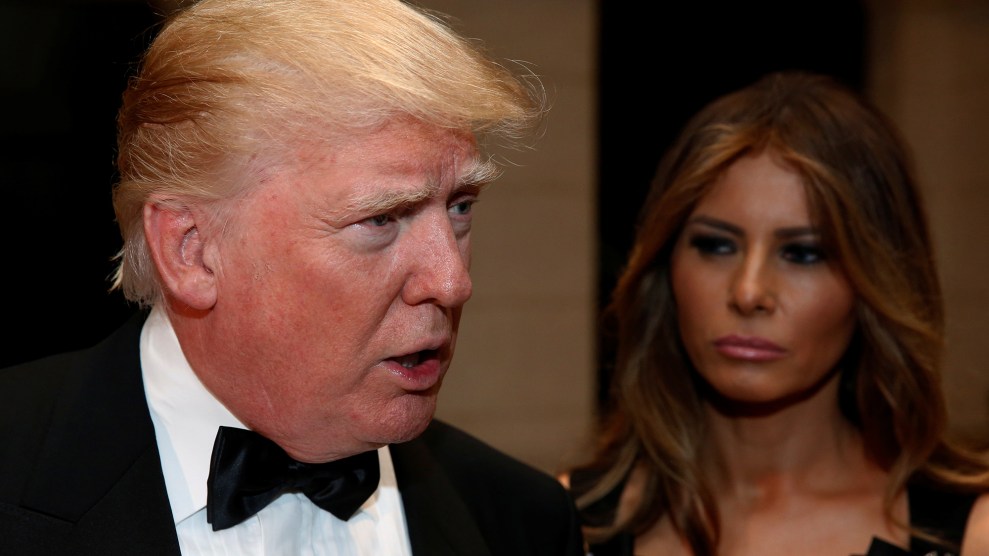 President-elect Donald Trump met on Friday with the heads of several US intelligence agencies for a personal briefing about the investigation into Russian meddling in the 2016 president election. But it’s still unclear whether Trump believes what he was apparently told—or what it would take to convince him to accept the government’s findings that Moscow hacked Democratic targets to help Trump win the election.

After the briefing, Trump issued a statement noting that “Russia, China, other countries, outside groups and people are consistently trying to break through the cyber infrastructure of our governmental institutions, businesses and organizations including the Democrat National Committee.” But he did not say he accepts the US intelligence community’s conclusion that Moscow did so during the 2016 campaign and was behind the leaking of Democratic emails through WikiLeaks and other sites. Trump did insist that “there was absolutely no effect on the outcome of the election including the fact that there was no tampering whatsoever with voting machines.” Given that Trump repeatedly cited the WikiLeaks material during the campaign, his claim that Russian hacking had no effect on the election is hard to prove.

The meeting comes a day after several top intelligence officials briefed a Senate committee on the matter. Hours after the Senate hearing, the Washington Post reported that US intelligence officials claim to have identified people who passed stolen Democratic emails and other materials to WikiLeaks and that intercepted communications between senior Russian government officials revealed Vladimir Putin’s regime had celebrated Trump’s victory. Several other media outlets later confirmed the Post‘s account.

Trump tweeted that reporters were given access to the materials because of “Politics!” and later questioned how the government could be confident in its conclusions, pointing to a report that the Democratic National Committee blocked or delayed access to its servers, according to the FBI. (The DNC and others noted that it was not necessary or customary for FBI investigators to access the servers in order to investigate the hack.) On Friday, Trump tweeted that he was “asking the chairs of the House and Senate committees to investigate top secret intelligence shared with NBC prior to me seeing.”

So how and why are they so sure about hacking if they never even requested an examination of the computer servers? What is going on?

On Friday morning, before his briefing, Trump told the New York Times that the intense focus on Russian hacking is “a political witch hunt” led by people embarrassed that Trump won in November.

“Making this about the election and not the subversion of a foreign government is beyond disturbing,” a former CIA official tells Mother Jones. “This isn’t about politics; it’s about espionage. He needs to get his head wrapped around the fact that he will be the target the moment he steps into office as POTUS.”

The Trump transition team and Hope Hicks, his campaign spokeswoman, did not respond to a request for comment. Incoming White House Press Secretary Sean Spicer has complained this week that reporters have gone too far in declaring Russia the culprit.

But security researchers say there is plenty of information in the public domain to conclude that the Russian government was involved in the hacks. That involvement was first reported by the Washington Post in June and has since been bolstered by several formal government announcements. The most recent government report, issued jointly by the FBI and the Department of Homeland Security on December 29, offered a basic outline of the US government’s conclusions and explained some of the technical evidence that led the US intelligence community to pin the blame on Russia.

“The evidence is airtight,” says Dave Aitel, a former NSA research scientist who now runs a security research firm. “I don’t know anyone in the industry that takes [the doubts] seriously. Within the industry, it’s not a question.”

Matt Tait, a security researcher and former information security specialist for the Government Communications Headquarters, the United Kingdom’s version of the National Security Agency, said the information that’s been presented so far by the US government and private security research firms who have investigated the hacks supports the case against the Russians.

“The public evidence for this hack is unusual in how compelling it is compared with almost all other breaches, and that to people who are motivated and technical enough to go through it properly, it provides a solid case even without access to the secret sources and methods used by the U.S. Intelligence Community,” Tait writes in an email to Mother Jones.

But Jeffrey Carr, a private information security researcher, believes there needs to be more independent vetting of the intelligence community’s conclusions. “I want to see a chain of verifiable evidence available for peer review that is internally consistent, that is not dependent solely upon technical evidence, and that brings us to reasonable certainty as defined by international law,” he wrote on Medium this month.

Still, it’s not clear that anything would convince Trump to accept Russia’s role in the hacks. “Based on the already overwhelming public evidence, what—short of a video of Putin himself at the keyboard—could change Trump’s mind?” former NSA lawyer Susan Hennessey tweeted Friday morning. Her next tweet: “Trump isn’t actually interested in being persuaded by evidence. His only question is whether he can maintain plausible deniability.”