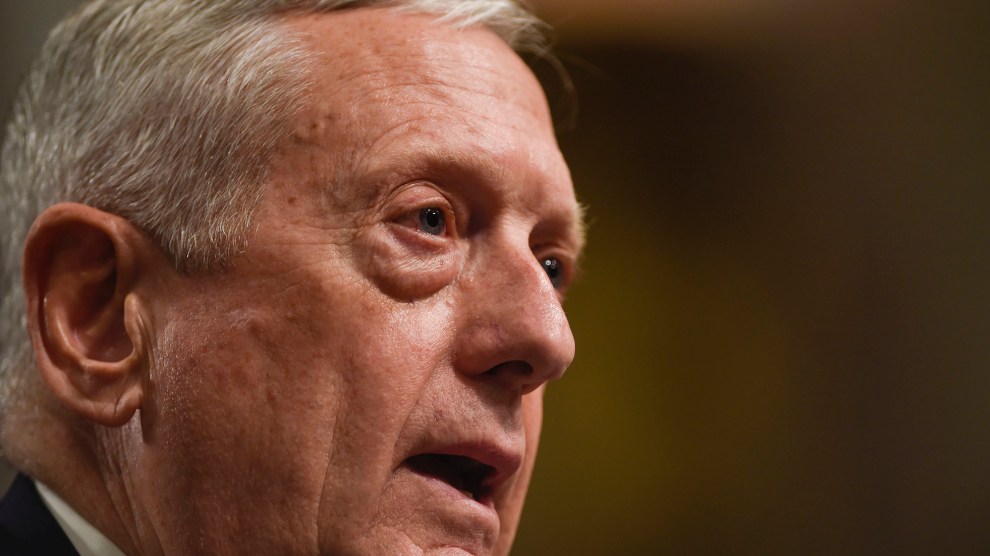 President-elect Donald Trump has aroused considerable concern among Democrats by nominating a secretary of energy who thinks the Department of Energy shouldn’t exist, a secretary of labor who opposes raising the minimum wage, a secretary of state who’s been cozy with Russia, and an attorney general who has had to spend an awful lot of time convincing people he’s not a racist.

Which made it all the more striking when a Trump Cabinet nominee got a friendly—and even laudatory—reception from the minority party in the Senate when he appeared for a confirmation hearing on Thursday. Retired Gen. James Mattis, up for secretary of defense, requires a congressional waiver to join the Cabinet because he’s been out of the military for fewer than seven years. But Democrats on the Senate Armed Services Committee appeared eager to grant him that waiver, in part because they see Mattis, nicknamed “Mad Dog,” as a moderating force on Trump’s far-right inner circle.

Sen. Jack Reed (D-R.I.), the top Democrat on the committee, told the retired Marine Corps general that “many have supported the waiver legislation in your confirmation because they believe you will be, to paraphrase Thomas Jefferson, ‘the saucer that cools the coffee.'”

Even Sen. Richard Blumenthal (D-Conn.), who voted against the waiver, told Mattis, “If there were ever a case for a waiver of that principle, it is you, in this moment in our history. I believe that your appreciation for the costs of war in blood, treasure, and lives and the impact on veterans afterward will enable you to be a check on rash and potentially ill-considered use of military force by a president-elect who perhaps lacks that same appreciation.”

Mattis’ thoughts on Russia and NATO helped keep his three-hour confirmation hearing relatively conflict-free, unlike those earlier this week for attorney general nominee Jeff Sessions and secretary of state nominee Rex Tillerson. Trump has been liberal in his praise of Russian President Vladimir Putin and has called NATO—the military alliance formed in response to threats from the Soviet Union—”obsolete.” Mattis called NATO “the most successful military alliance in modern world history, maybe ever,” and he was willing to castigate Putin and discuss Russian threats to US interests. “The most important thing is that we recognize the reality of what we deal with with Mr. Putin,” he told the committee, “and we recognize that he is trying to break the North Atlantic alliance, and that we take the integrated steps—diplomatic, economic, military, and the alliance steps—to defend ourselves where we must.”

Mattis said he agrees with Trump that the United States should engage Russia and identify areas of cooperation, but that we have to be realistic. “Russia has chosen to be a strategic competitor,” said Mattis, who was removed from his military post in 2013 after the Obama administration felt he was too hawkish on Iran. “They’re an adversary in key areas. I’m all for engagement, but we also have to recognize reality and what Russia is up to. And there’s decreasing areas where we can engage cooperatively and increasing areas where we’re going to have to confront Russia.”

He added, “I would not have taken this job if I didn’t believe the president-elect was open to my advice on this or any other matter.”

Advocates of women in the military have expressed concern that Mattis could roll back rules allowing women to serve in combat roles. Mattis co-edited the 2016 book Warriors & Citizens: American Views of Our Military, in which he wrote that “an uninformed public is permitting political leaders to impose an accretion of social conventions that are diminishing the combat power of our military.” But on Thursday, he said, “I have no plan to oppose women in any aspect of our military,” and he later added that he had no issues with gays serving openly.

“Frankly, senator,” he said, “I’ve never cared much about two consenting adults and who they go to bed with.”