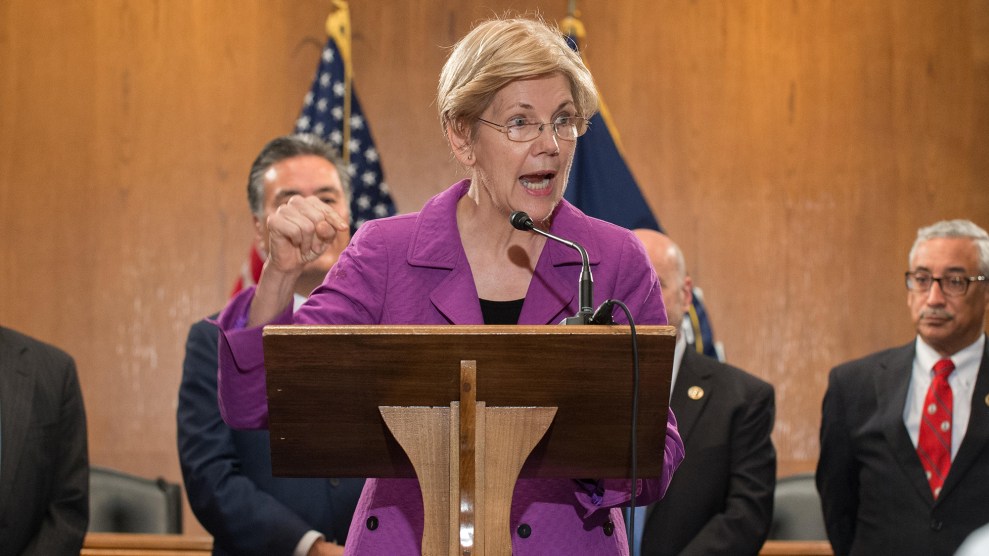 Former employees of Carl’s Jr., the company run by Andrew Puzder, Donald Trump’s choice to head the Department of Labor, got to testify on Capitol Hill today—but not in his confirmation hearing. Sen. Elizabeth Warren (D-Mass.) had scheduled the meeting to showcase how Democrats might grill Puzder. Dems had asked for former employees who would testify when Puzder appears before the Senate Health, Education, Labor and Pensions Committee (HELP), but HELP chair Lamar Alexander (R-Tenn.) shot down that request.

It’s easy to see why. “Mr. Pudzer took a company that I loved and turned it into a business that makes money by stealing from its workers,” Laura McDonald, a former 20-year employee at Carl’s Jr., told the hearing. “I honestly can’t think of anyone less qualified to enforce laws that are supposed to protect employees.”

McDonald and two other Carl’s Jr. employees offered emotional testimonies about their poor working conditions and struggles to get by on a Carl’s Jr. salary. Lupe Guzman, a 47-year-old single mother of six who runs the graveyard shift at a Carl’s Jr. in Las Vegas, told the senators about surviving on $8.75 per hour in a job she’s held for seven years. She said employees don’t take breaks mandated by state law and alleged that paychecks excluded hours she’d worked. She also said she’s been held up at gunpoint twice, and the company never inquired about her well-being, just whether anything had been stolen. “I mean nothing to them,” she said through tears. “I’m just somebody who covers a shift that nobody wants. All they care about is protecting their money.”

Guzman said she is barely scraping by—unable to fix her car, with rent and bills eating up her paycheck. “I work almost every day and am still considered poor,” she said. “I live on housing assistance, food stamps, and Medicaid just to survive. If I didn’t survive on these things, I would be homeless with my kids.”

“I mean nothing to them,” she said through tears. “I’m just somebody who covers a shift that nobody wants. All they care about is protecting their money.”

“I also want to say loud and clear about what this means,” Warren said in the hearing. “That a giant corporation would build its entire business model around squeezing workers like you…and then count on the taxpayers to come up with food stamps, to come up with housing assistance, to come up with Medicaid. To come up with all the help that you need just barely to hold it together, so they can maximize their profits. This is just not right in America. I believe in capitalism, but I believe that these companies need to pay the full cost of keeping their workers working.”

Puzder is CEO of the company that owns Hardee’s and Carl’s Jr., franchises that the current Labor Department has found to have violated wage laws in about 60 percent of its investigations of locations. Puzder himself has often been dismissive of his company’s workers and has been skeptical of raising the minimum wage. (He’s been vague on his exact views but was not a fan of President Barack Obama’s calls to increase the federal minimum wage to $10.10.) “Mr. Puzder also has a long record of cheating workers out of overtime,” Warren said Tuesday. “And he has paid out millions of dollars to settle claims when he was caught cheating.” (My colleague Tom Philpott wrote last month about a $9 million agreement the company reached in 2004 to settle overtime complaints.)

Midway through the Democrats’ trial of Puzder, CNBC reported that Trump’s man wouldn’t be getting a hearing next week as initially scheduled. Instead, Puzder might not face congressional confirmation until February.

McDonald emphasized that the company had changed under Puzder’s leadership. “When Carl Karcher was alive and in charge, we felt like someone in the company at least cared about the workers,” she said. “Since Mr. Karcher passed away, CKE has tightened its budgets in a way that makes it impossible to do the job without working off the clock. Worse, the company just seemed not to care about the employees anymore.”