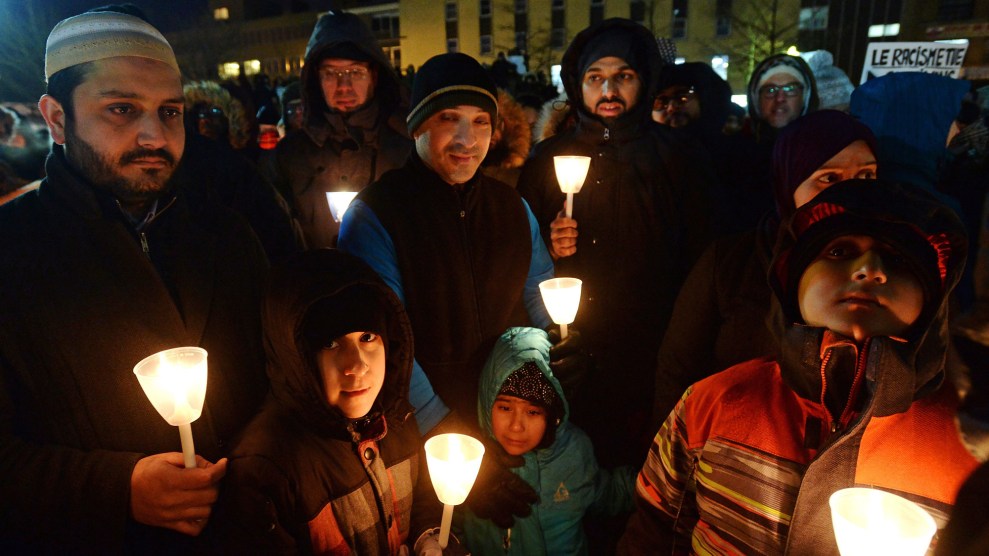 A vigil in Montreal on Monday for the victims of the Quebec City mosque attack.Ryan Remiorz/The Canadian Press via AP

Editor’s note:  A day after this report, the office of Canadian Prime Minister Justin Trudeau called for Fox News to correct the erroneous tweets. Fox News has since retracted and apologized for them; see the update below.

Late Monday, Canadian authorities charged Alexandre Bissonnette, a white 27-year-old university student, with multiple counts of murder for an attack on a mosque in Quebec City that left six dead and many others injured. According to a report in the Globe and Mail, the 27-year-old Bissonnette “was known in the city’s activist circles as a right-wing troll who frequently took anti-foreigner and anti-feminist positions and stood up for U.S. President Donald Trump.” He also reportedly became a fan of far-right French leader Marine Le Pen after she visited Quebec City last March; a childhood friend and fellow student told the Globe and Mail that Bissonnette had become a xenophobe and was “enthralled” by racist nationalism.

With every mass shooting, the initial news is almost always riddled with inaccuracies—misidentification is common, and rarely is there more than one attacker. By now this is very well-known in newsrooms. Earlier on Monday, an additional suspect was reportedly in custody: a man of Moroccan origin. Sure enough, Quebec officials soon clarified that this second person was considered a witness, not a suspect in the attack. But the toothpaste was already out of the tube with Fox News, which had pushed the story in a particular direction: 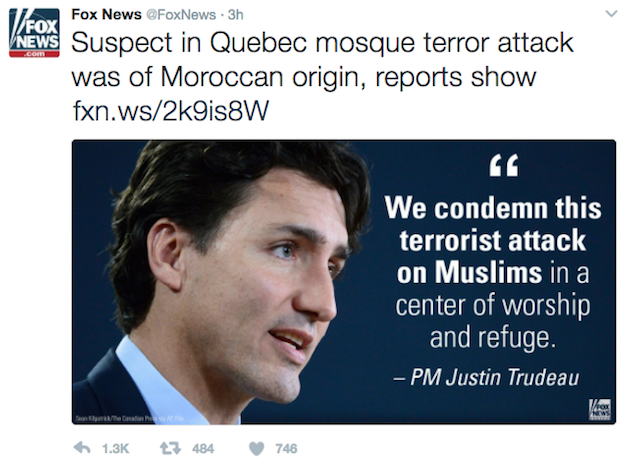 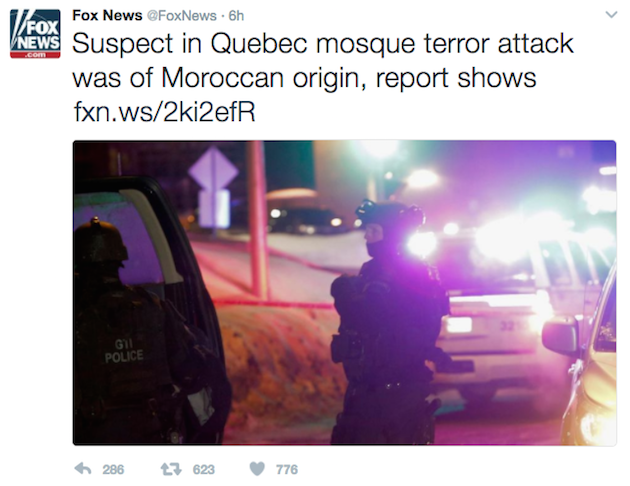 The Fox story was updated to clarify that Bissonnette was the only suspect, but the above Fox tweets remain in circulation as of this post.

Meanwhile, White House press secretary Sean Spicer offered an eyebrow-raising take on the attack, seeming to cite it as further justification for President Trump’s crackdown on refugees and immigrants from predominantly Muslim countries. Spicer first noted that in a call on Monday with Canadian Prime Minister Justin Trudeau, Trump had agreed that the motive remained unclear, and had condemned the attack “in the strongest possible terms.” But then Spicer continued with this statement: “It’s a terrible reminder of why we must remain vigilant and why the president is taking steps to be proactive rather than reactive when it comes to our nation’s safety and security.”

The alleged far-right extremist who attacked the mosque had not yet quite come into view. But with the chaotic fallout from Trump’s immigration order still dominating headlines around the world and the White House under a storm of criticism, it would be hard to interpret Spicer’s comments as unrelated to the population newly barred from entering the United States. 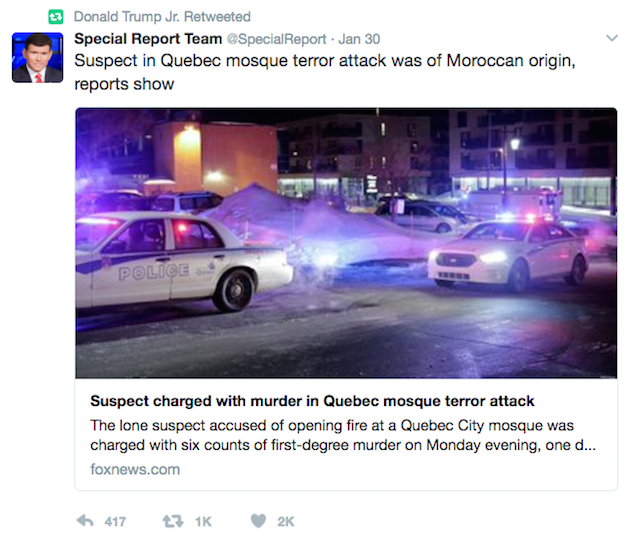 Update, Feb. 1, 7:45 a.m. PT: Fox News has retracted the three tweets misidentifying the Quebec City shooting suspect. A day after Mother Jones reported on the erroneous tweets—which collectively were retweeted thousands of times—the director of communications for Canadian Prime Minister Justin Trudeau sent an email to Fox News calling for a retraction and rebuking the network for allowing “false and misleading language” to continue circulating:

These tweets by Fox News dishonour the memory of the six victims and their families by spreading misinformation, playing identity politics, and perpetuating fear and division within our communities.

We need to remain focused on keeping our communities safe and united instead of trying to build walls and scapegoat communities. Muslims are predominantly the greatest victims of terrorist acts around the world. To paint terrorists with a broad brush that extends to all Muslims is not just ignorant – it is irresponsible.

(See the full text of the email from Trudeau’s communications director, Kate Purchase, in her timeline.)

In a statement emailed to Mother Jones, the managing director of FoxNews.com, Refet Kaplan, said:  “FoxNews.com initially corrected the misreported information with a tweet and an update to the story on Monday. The earlier tweets have now been deleted. We regret the error.”