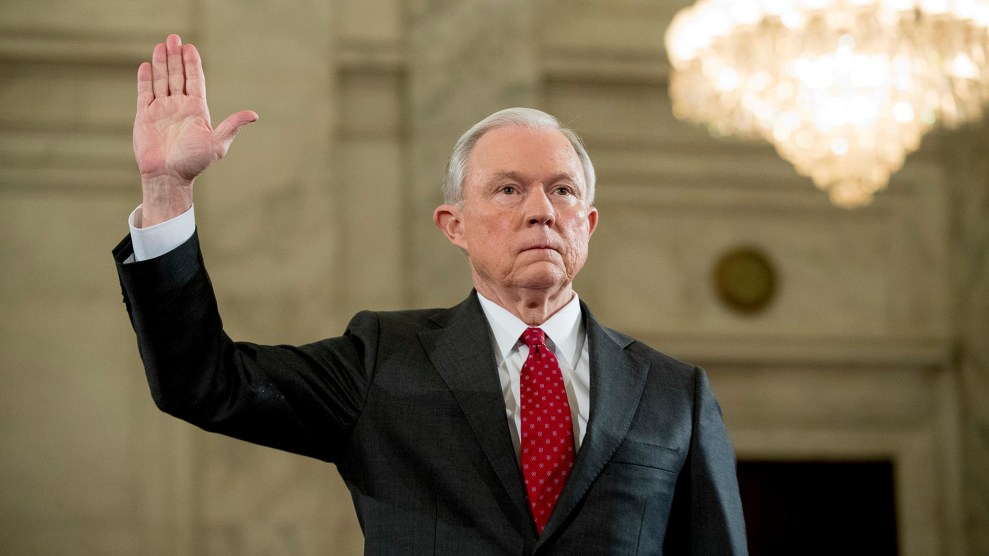 Thirty years ago, the Senate rejected the nomination of Jeff Sessions to a federal judgeship in Alabama following extensive testimony alleging that Sessions held racist views and pursued racially motivated prosecutions as a federal prosecutor. On Tuesday, when Sessions again appeared before the Senate Judiciary Committee, this time to be considered for the post of attorney general, Republicans tried to rewrite that history.

Sessions, his Republican Senate colleagues, and President-elect Donald Trump’s transition team used the first day of Sessions’ confirmation hearings to try to clear the Alabama Republican senator of the decades-old charges of racism. This effort involved testimonials from senators, handouts from the Trump team, and efforts to change the narrative around Sessions’ prosecution of civil rights advocates.

Sessions’ 1986 hearings featured testimony alleging that Sessions had called a black colleague “boy,” described a white civil rights lawyer as a disgrace to his race, and labeled the ACLU and NAACP “un-American” organizations. Witnesses also testified about Sessions’ unsuccessful prosecution of three black civil rights activists for voter fraud in 1985, a case that involved allegations of intimidation of rural black voters by law enforcement. Throughout Tuesday’s hearing, Republicans actively tried to debunk these decades-old accusations and paint Sessions as an egalitarian who has been subject to a smear campaign by political opponents.

Sen. Susan Collins (R-Maine) kicked off the campaign when she introduced Sessions at the beginning of Tuesday’s all-day hearing. Collins recounted a story about the late Sen. Arlen Specter (R-Pa.), who voted against Sessions in 1986 but in 2009 said he regretted that vote “because I have since found that Sen. Sessions is egalitarian.” (Though deceased, Specter ended up being one of Sessions’ key character witnesses on Tuesday; the nominee himself invoked Specter’s comments as proof that he is not the racist “caricature” that Democrats made him out to be in 1986.) Collins then noted Sessions’ prosecution in the early 1980s of two Ku Klux Klan members who had murdered a black teenager, Michael Donald, in Alabama—though an attorney who worked on the KKK murder case has claimed that Sessions initially did not want to pursue the case—and his appointment of a black lawyer as counsel in the Senate. “These are not the actions of an individual who is motivated by racial animus,” Collins said.

Sen. John Cornyn (R-Texas) told Sessions, “We know your heart. We know what kind of person you are…You’ve got an outstanding record that you should be proud of.” Sen. Ted Cruz (R-Texas) spent nearly 10 minutes describing Sessions’ prosecution of the two Klansmen and urged the media to cover that story.

Sessions forcefully rebutted the charges of racism that have haunted him since 1986. “I never declared that the NAACP was un-American or that a civil rights attorney was a ‘disgrace to his race,'” he said in his opening statement. He defended his failed prosecution of the three civil rights activists, known as the Marion Three, by saying he was defending the voting rights of African Americans who claimed their mail-in ballots had been tampered with. “It was a voting rights case,” he protested repeatedly. The New York Times on Monday recounted the history of that case, which bears all the markings of a prosecution aimed at suppressing the black vote. It only took the jury a few hours to return a verdict of not guilty.

“Our country needs an attorney general who doesn’t misrepresent or inflate their level of involvement on any given issue,” said Sen. Al Franken.

While Sessions was rebutting “the caricature that was created of me,” the Trump transition team circulated a four-page handout to the press with the headline “Fact Sheet: Prior Comment Allegations From the 1986 Hearing Have Been Discredit & Debunked.” The handout attempted to reject some of the accusations that derailed Sessions’ 1986 nomination, such as the allegation that he had referred to a black colleague as “boy.” It listed these comments under the heading “myths” and then rebutted them with quotes from Sessions and some of his associates under the heading “facts.” In some instances, the sole rebuttals provided were quotes of Sessions himself denying the claims.

A few minutes later, the transition team circulated a second handout. This heftier one purported to exonerate Sessions of any wrongdoing in the 1985 voter fraud case. It contained a letter from the son of an activist couple that Sessions had charged in that case who expressed his support for Sessions, as well as images of a few of the ballots used as evidence in the case. But nothing in the handout cast doubt on the view that the case was brought on thin grounds against three people who were helping African Americans vote in Alabama’s Black Belt.

A third handout from the Trump team featured a list of civil rights cases and voter fraud prosecutions that Sessions was involved with in Alabama. All three handouts were prepared by a team of lawyers working for the Trump transition team on Sessions’ confirmation, including three former Sessions staffers.

The only Democrat to fight back against this effort was Sen. Al Franken of Minnesota. Franken aimed to sow doubt about Sessions’ characterization of his record on civil rights over the years, focusing on two times Sessions appears to have exaggerated his work on civil rights cases. The first was a 2009 interview in which he claimed to have filed “20 or 30” desegregation cases as a prosecutor in Alabama. He now admits it was a smaller number. The second is the written questionnaire Sessions submitted to the Senate Judiciary Committee as part of the confirmation process. In that questionnaire, he listed four civil rights cases as among the 10 most significant cases he personally handled. But three former Justice Department lawyers who oversaw three of those cases claimed in an op-ed in the Washington Post that Sessions played virtually no role in them.

The Justice Department “is facing real challenges, whether it’s protecting civil rights or defending national security,” Franken concluded, “and our country needs an attorney general who doesn’t misrepresent or inflate their level of involvement on any given issue.” But misrepresentation and inflation—or at least attempts at coordinated spin—were the theme of the day for Sessions’ advocates.