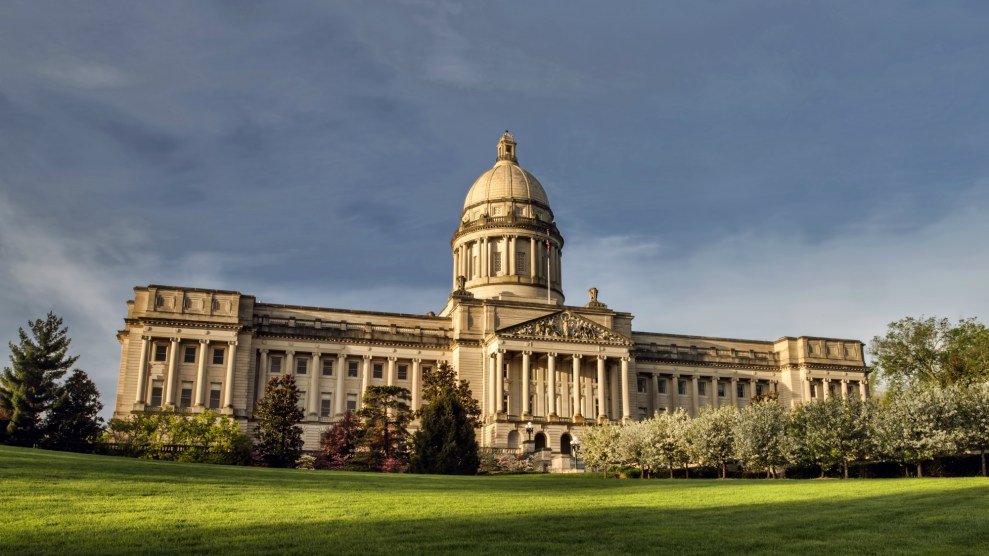 Update, January 9: After hours of impassioned debate on Saturday, January 7, the Kentucky House passed the 20- week abortion ban in a 79-15 vote. The Senate also passed the ultrasound measure in a 32-5 vote. Both bills now go to Gov. Matt Bevin’s desk.

After a year during which 19 states passed more than 60 new restrictions on abortion access, conservative state legislatures are already working overtime to get additional restrictions on the books in 2017. Kentucky launched its offensive earlier this week with the introduction of a 20-week abortion ban and a bill requiring women to receive ultrasounds at least 24 hours before an abortion. Both measures have moved quickly through the Legislature and could become law as soon as this weekend.

The late-term abortion ban, which would prohibit nearly all abortions after 20 weeks post-fertilization, was introduced in the state Legislature on Tuesday, the first day of the legislative session. The measure would only allow late-term abortions in medical emergencies that pose a risk of bodily harm or threaten the life of the mother. Early reports suggested the bill would also provide exceptions in cases of rape or incest, but the bill’s sponsor, state Sen. Brandon Smith, says that is not the case and the exception does not appear in currently available copies of the legislation. According to a draft of the legislation, physicians who perform late-term abortions in violation of the law could have their medical licenses suspended and be forced to pay punitive damages sought by women who received the procedure.

The legislation has barreled through the committee process, clearing the Senate’s Veterans, Military Affairs and Public Protection Committee Wednesday evening. The measure was brought to the Republican-led Senate Thursday afternoon and sailed through the chamber after a 30-6 vote. The ban now goes to the House, where Speaker Jeff Hoover, a Republican, expects it to pass with “overwhelming support.”

The ultrasound measure—which comes one year after the state passed an informed-consent law requiring women to have a medical consultation at least 24 hours before undergoing an abortion—has also moved quickly, passing the House’s Judiciary Committee Wednesday afternoon. The bill was approved by the Kentucky House on Thursday and will likely clear the Senate when it comes up for a vote.

Local reproductive rights advocates have voiced their frustrations with the fast-tracking of the bills, arguing that the legislation has not been properly screened. “This legislative session measures are being advanced at unprecedented speed,” the Kentucky divisions of the American Civil Liberties Union and Planned Parenthood said in a joint press release, according to the Huffington Post. “Things are moving so quickly, members of the public and press were unable to obtain copies of the 20-week abortion ban and ultrasound bills before they received a reading and were headed to committee for a vote.”

But Senate President Robert Stivers was not concerned about the process, telling the Lexington Herald-Leader earlier this week, “I think we are very well aware of the issues as it relates to this bill and are ready and willing to proceed.” Stivers added that he would like to see abortion banned even before the 20-week mark.

The Kentucky Legislature is also considering a third abortion-related restriction that would block public funding of Planned Parenthood and other abortion providers. Federal law already prevents these groups from using public funds to cover abortions, but they do receive money to provide non-abortion health care services to low-income women. On Thursday, GOP House Speaker Paul Ryan said House Republicans would move to strip all federal funding from Planned Parenthood.

In the previous legislative session, Kentucky Republicans controlled the state Senate and the governor’s mansion, leaving the Democratic-led House as a possible backstop to legislative overreach. But with that chamber falling into Republican control after the November elections, the GOP now has a supermajority in the Legislature and a Republican governor who will likely sign the legislation. Other states with a “Republican trifecta,” such as Missouri and Iowa, are also likely to pass extensive abortion restrictions this year. Missouri alone has already seen 14 anti-abortion measures filed in the weeks leading up to the beginning of its legislative session.

The 1973 Supreme Court decision Roe v. Wade established a woman’s constitutional right to an abortion at any point before “fetal viability”—typically 24 weeks into pregnancy. Nonetheless, 20-week abortion bans are increasingly proving to be an effective approach to limit abortion access. Nearly 20 states have banned late-term abortions in recent years, and other states—Virginia, for example—are hoping to push though laws this year. Last month, Ohio Gov. John Kasich signed a 20-week abortion ban into law after vetoing a “heartbeat bill” that would have banned the procedure as early as six weeks into pregnancy. Proponents of the measures argue that a fetus can feel pain after 20 weeks, an argument that has been refuted by reproductive rights advocates and has not been confirmed by medical research.

Advocates are still planning their next steps and have not announced if they will file a lawsuit if Kentucky’s 20-week ban becomes law. But Republican politicians say they see no problem with their moves to restrict a woman’s legal options. “This is my belief: There are two viable beings involved,” Stivers said earlier this week. “One had a choice early on to make a decision to conceive or not. Once conception starts, another life is involved, and the Legislature has the ability to determine how that life proceeds.”