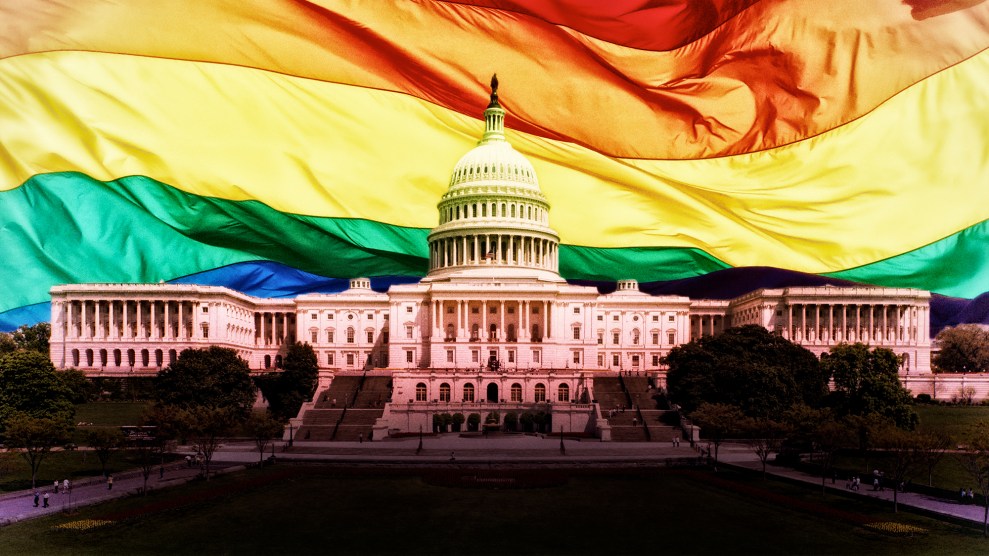 After every major LGBT rights group in America campaigned in support of Donald Trump’s opponent Hillary Clinton, it came as little surprise that Trump won just 14 percent of the LGBT vote on November 8. Yet, one of Trump’s most vocal and controversial cheerleaders has been a gay man, political provocateur and Breibart News writer Milo Yiannopolous. Yiannopolous—who has penned columns such as “Birth Control Makes Women Unattractive and Crazy” and “The Conservative Father’s Guide to Cutting Off Activist Children”—repeatedly made headlines last year for his inflammatory rhetoric. At his gays-for-Trump event at the Republican National Convention in Cleveland last summer, Yiannopolous argued the Democratic Party was “nannying us about transgender pronouns” while “pander[ing] to an ideology that wants me dead”—his take on Islam as an anti-gay religion. He declared Trump “the most pro-gay candidate in American electoral history,” arguing Trump would be great for gay people.

Last July, Yiannopolous was banned from Twitter after inciting his followers to make racist attacks against black actress Leslie Jones. More recently, he mocked a transgender student at a college campus where he was giving a speech. Stops on Yiannopolous’ campus tour have regularly been met with protests and calls for university administrations to cancel his appearances.

When gay magazine Out put Yiannopolous on its cover last summer, the backlash was fierce and swift—especially from LGBT people of color, who recognized all too well the dangers of “normalizing” champions of bigotry.

So how should queer folk react to Yiannopolous’ hatred, and what can we do to combat it? I talked to Preston Mitchum, an LGBT rights and racial justice advocate, to find out. Mitchum—whose writing has appeared in The Atlantic, the Huffington Post, Ebony, and more—is also a policy analyst at the Center for Health and Gender Equity and a legal research professor at Georgetown University.

What follows is our conversation about racism and sexism in the LGBT community, and what queer solidarity looks like in the face of hatred.

Mother Jones: Milo is an admitted troll, and his rhetoric is over-the-top. Should we even take him seriously?

Preston Mitchum: Queer people of color have always taken those kinds of hateful ideas—and the actions that flow therefrom—seriously. Bias is not new to the LGBT community. Our community is racist, sexist, and transphobic. But Milo feels different because of the extreme nature of his statements. His views aren’t common. But he is setting the stage for what vitriol can look like in the community if left unchecked.

MJ: Queer folk—even white ones—are marginalized too. Why would some be receptive to ideas like Milo’s?

“Milo feels different because of the extreme nature of his statements. His views aren’t common.”

PM: Racism, sexism, and transphobia are foundational to this country. Queer people didn’t invent them, but we can’t separate them from the LGBT community. We internalize what we see every day. I think about people like Ben Carson, who pushes ideas that have been popularized by racists. We also learn from our experiences. So Milo being a gay man does not mean that he’s going to believe everything that I believe, because I am a black man who experiences racism and homophobia at the same time. Milo doesn’t have that experience. Part of fixing this is to first recognize that we are predisposed to discrimination and then intentionally work to undo what we have been taught about racism and misogyny.

MJ: A lot of people don’t get that.

PM: They don’t. They might understand what their own oppression looks like as a white gay man, but systemically that looks different for someone who is a woman and black and gay. People who are part of multiple marginalized communities face harsher treatment just because of their intersections. Many people don’t understand privilege. What’s worse is they don’t recognize that they contribute to other queer people’s oppression, either. The same goes for a lot of mainstream white-led LGBT organizations.

MJ: Talk about that.

PM: Mainstream white individuals and white-led organizations are oftentimes the ones who sweep statements like Milo’s under the rug. A lot of it has to do with responding to donors’ demands. If your donors are sending you money to advocate for marriage equality, that’s what you’re going to do. But there are other communities who also need the support of those groups but who have been made invisible because they don’t have the money to give them to focus on their needs. It’s incumbent on those organizations who say they care about all LGBT people to find it within their capacity to still do work on behalf of black and brown LGBT people even if they’re not paying for it. That’s what solidarity looks like.

At the start of the Black Lives Matter movement, which was led immediately by black queer and trans folk, you didn’t hear much from many white-led LGBT organizations, which was frustrating because a lot of the immediate leaders of the movement were black queer and trans people. And earlier than that, when there was a campaign to repeal DOMA and Don’t Ask Don’t Tell, many white-led orgs sought the support of the NAACP. But when the crux of the Voting Rights Act was struck down by the Supreme Court that same year, there was silence from those same groups. I talked to people in LGBT organizations who were immediately defensive when that critique was brought to their attention. We have to be willing to have these conversations about racism that require us to be critiqued.

MJ: Why are those conversations difficult to have?

We have to be honest about what’s happening within our own community if we want to push back against Trump.

PM: Part of the problem is that progressives are so focused on unifying against conservatives. Unity is good, but it often silences more marginalized groups. We have to be honest about what’s happening within our own community if we want to push back against Trump. It’s easy to point out people who don’t identify as you and say, “You’re the bad person here.” It’s more difficult to look within our own community and say, “We identify and have some common ground, but there’s something about you that I know is vehemently opposed to me.”

MJ: How has this bias been manifest within the LGBT community historically?

PM: It’s hard to say. LGBT people have vocally been discussed only for the past 40 years. But even in that, the way we talk about our history is racist. Only in the past couple years have we started to mention some of the black and Puerto Rican trans women who were really at the start of Stonewall. Or acknowledge people like Bayard Rustin, who was the architect of the 1963 March on Washington. We know that is the whitewashing of history. LGBT history is no different.

MJ: How are queer people of color pushing back on that exclusion—and how can the larger community root out the bias that drives that exclusion?

PM: Black Youth Project 100—which I’m a part of—has been challenging that erasure of black queer and trans folk for the past two and a half to three years, and making sure that people who are marginalized within the LGBT community are centered and that work is done to organize around their needs. There are others doing this work. But there are things that everyone can do—and that many people have been doing. One is to come prepared with information to push back on racist and sexist rhetoric. Social media is a huge way people have been doing that. Black and brown people also need to be very blunt about how oppression treats us as queer and trans folk.

One of the things that I always want to discuss is believing the experiences of people of color. We often aren’t believed until a white person confirms our stories. I would also encourage people to donate money to organizations that do this work. That’s what people can do to help fix the problem.