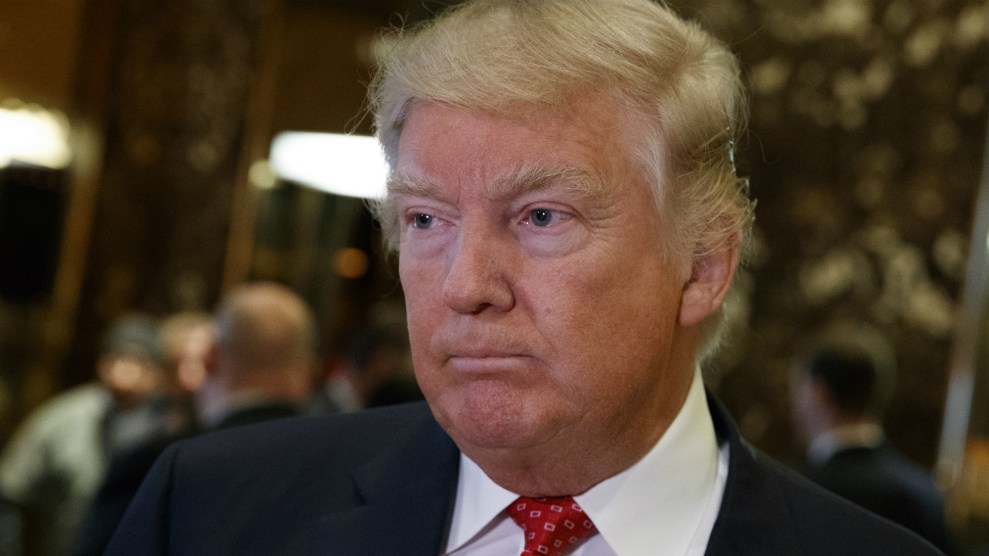 Congressional Democrats filed new legislation on Monday in both the House and Senate that would force Donald Trump and future presidents to obey the same strict conflict-of-interest laws governing other federal officials.

In 11 days, Trump is poised to enter the White House with unprecedented conflicts. His public disclosures of his personal finances show interests in hundreds of businesses, billions in assets, and more than $700 million in debts—including entanglements with foreign investors and lenders. Trump has said he will only step back from overseeing the businesses he owns, but he has so far declined to divest any of his assets (or the debts attached to them), citing the fact that federal conflict-of-interest laws exempt the president and vice president. The legislation introduced by congressional Democrats would remove this exemption and categorize a violation of conflict-of-interest regulations as an impeachable offense.

Democrats have hammered Trump over his conflicts, but with little Republican support they have so far failed to get much traction. The new legislation will face similar hurdles—Republicans are unlikely to allow the measure to even come to a vote—but it could serve as a pressure point on Republicans who have been dodging the issue.

“The only way for President-elect Trump to truly eliminate conflicts of interest is to divest his financial interests by placing them in a blind trust,” said Sen. Elizabeth Warren, the lead Democrat sponsoring the Senate’s version of the bill. “This has been the standard for previous presidents, and our bill makes clear the continuing expectation that President-elect Trump do the same.”

In addition to requiring the president to transfer his conflict-causing assets into a blind trust overseen by an independent trustee, the bill would prohibit presidential appointees from working on any issue that would benefit the financial interests of the president and the president’s immediate family. In Trump’s case, such a provision could block his appointees from matters ranging from Justice Department settlement talks with Deutsche Bank (Trump’s biggest lender) to foreign policy decisions involving countries, such as Turkey, where the Trump Organization has business interests. The legislation also folds in a measure, previously sponsored by Sen. Ron Wyden (D-Ore.), that would require the sitting president and nominees of the major parties to publicly release their tax records.

Watchdog groups that have been calling for Trump to take action applauded the legislation.

“A second-grader could see that the only solution to this pervasive problem is for President-elect Trump to sell off the family business,” said Robert Weissman, president of Public Citizen. “Because there is no sign he intends to do this, it is incumbent on the Congress to force him to do so. That’s why immediate passage of Senator Warren’s legislation is desperately needed.”

Read the full version of the Presidential Conflicts of Interest Act legislation here.