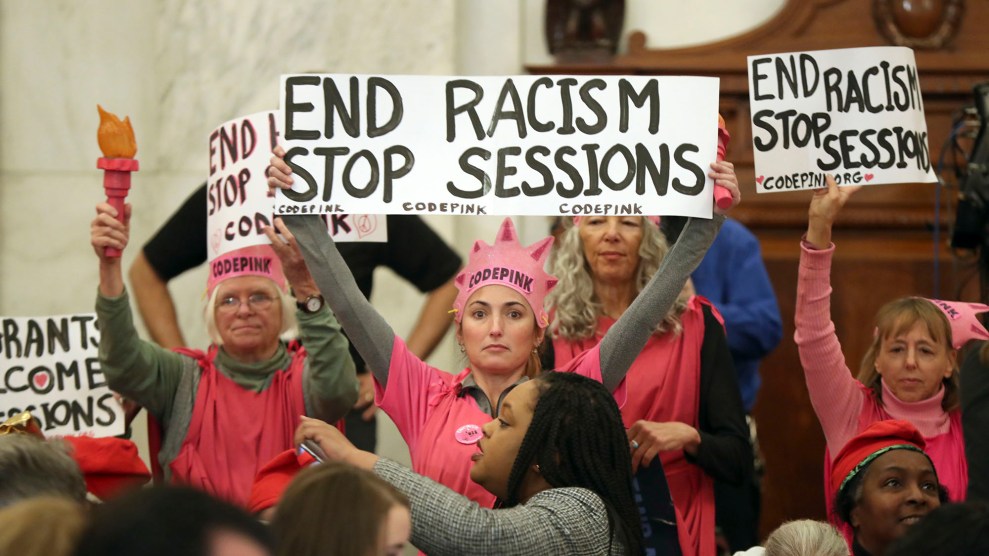 With each passing day, the path for Jeff Sessions to be confirmed as attorney general would seem to grow more treacherous. The senator from Alabama has stood by President Donald Trump on the issues that have generated a firestorm over the past week and drawn increasing condemnation from fellow Republicans in Congress: the refugee and travel ban and the false voter fraud allegations.

Yet when Sessions’ nomination comes to a vote, beginning with a committee vote scheduled for Tuesday morning, he appears set to sail through. Senate Democrats would need to launch a major campaign against him in order to peel off members of the Republican majority and sink his nomination. Instead, at least one Democrat plans to vote for him, and no Senate Republicans have spoken out against him.

When Trump announced Sessions’ nomination, civil rights groups quickly responded by highlighting past allegations that Sessions had made racist comments to African American colleagues and targeted black civil rights leaders in a failed voter fraud prosecution in the 1980s. But at his confirmation hearings this month, Republican senators defended his record on civil rights, few Democrats pressed him on the issue, and he emerged largely unscathed.

Trump’s announcement last week of a “massive investigation” into voter fraud, based on the unsubstantiated claim that millions of illegally cast ballots had cost him the popular vote, once again brings Sessions’ record on voting rights to the fore. As attorney general, Sessions—whose 1986 nomination for a federal judgeship was scuttled partly by questions about his prosecution of black voting rights advocates—would lead the Department of Justice as it may undertake an investigation that could serve to suppress voter turnout.

Then, on Friday, Trump signed an executive order halting the refugee resettlement program, banning Syrians from entering the country indefinitely, and banning anyone from six other Muslim-majority countries for 90 days. A federal judge quickly halted part of the order, and lawmakers from both parties spoke out against it. Several Republican senators have criticized the executive order but declared their support for Sessions. Susan Collins of Maine called the order’s refugee ban “overly broad” and said that “implementing it will be immediately problematic.” Jeff Flake of Arizona noted, “Enhancing long term national security requires that we have a clear-eyed view of radical Islamic terrorism without ascribing radical Islamic terrorist views to all Muslims.” And Ben Sasse of Nebraska said, “If we send a signal to the Middle East that the US sees all Muslims as jihadis, the terrorists win by telling kids that America is banning Muslims and this is America versus one religion.”

Prior to the November election, Sessions served as the head of the Trump campaign’s national security committee, and he defended Trump’s proposal for a temporary ban on all Muslims entering the United States as “legitimate.” He explained his position in an interview with the conservative website American Thinker last June. “We have no duty to morally or legally admit people,” he said. “The Immigration Naturalization Act says the president can refuse entry to ‘any alien or class of aliens he deems detrimental to the interests of the U.S.’ It is appropriate to be aggressive in our vetting.” Sessions went on to describe an immigration policy clearly targeted at Muslims, based on questions like whether people seeking to enter the country “believe in Sharia law or the Constitution.” Sessions finished with a warning against Islam: “We need to use common sense with the who-what-where of the threat. It is the toxic ideology of Islam.”

This position wasn’t new for Sessions. It was an approach to immigration and refugee settlement that he had advocated as a senator. For years, Sessions was an adamant opponent of President Barack Obama’s refugee program. He objected to allowing refugees from Muslim-majority countries and opposed giving large numbers of Muslims permanent legal residence in the United States. Sessions’ communications chief Stephen Miller took this message to the Trump campaign and now serves as a policy adviser in the White House. As the Daily Beast’s Betsy Woodruff pointed out, Sessions and Miller spent years making the case that Obama’s refugee program presented a terror threat, and Miller conducted hours of research to try to connect refugees in the United States to terrorist activity. Sessions said on the Senate floor in November 2015, shortly before Miller joined Trump’s campaign, “It is an unpleasant but unavoidable fact that bringing in a large unassimilated flow of migrants from the Muslim world creates the conditions possible for radicalization and extremism to take hold.” The New York Times reported that Miller was involved in drafting Trump’s refugee and travel ban.

On the president’s voter fraud conspiracy, Sessions has proved unwilling to buck Trump. During Sessions’ confirmation hearing before the Senate Judiciary Committee earlier this month, Sen. Al Franken (D-Minn.) grilled him over the issue of voter fraud. “Do you agree with President Trump that millions of fraudulent votes were cast in the presidential election?” he asked. Sessions declined to contradict Trump’s claim and stated (wrongly) that fraud is a regular occurrence.

“Sen. Franken, I don’t know what the president-elect meant or was thinking when he made that comment or what facts he may have had to justify his statement,” Sessions said. “I would just say that every election needs to be managed closely and we need to ensure that there is integrity in it. And I do believe we regularly have fraudulent activities occur during election cycles.”

Although Sessions has embraced the most controversial elements of Trump’s agenda from his first full week in office, Democrats have shown little willingness to oppose his confirmation. That led former Obama adviser Dan Pfeiffer to tweet on Sunday:

We can’t live in a world where Trump violates every norm and Democratic elected officials support people like Sessions out of courtesy https://t.co/Li1pkuX18P

After a weekend of protests against Trump’s executive order, Democratic lawmakers began plotting how to capitalize on that momentum to oppose Trump and his travel ban. This effort will likely include more opposition to his Cabinet nominees, as well as the Supreme Court nominee he plans to announce Tuesday night. The question is whether Senate Democrats make the Sessions vote part of their resistance.

“I strongly believe this is a good litmus test of how serious you are about your concerns about the Muslim ban,” says Faiz Shakir, political director for the ACLU.