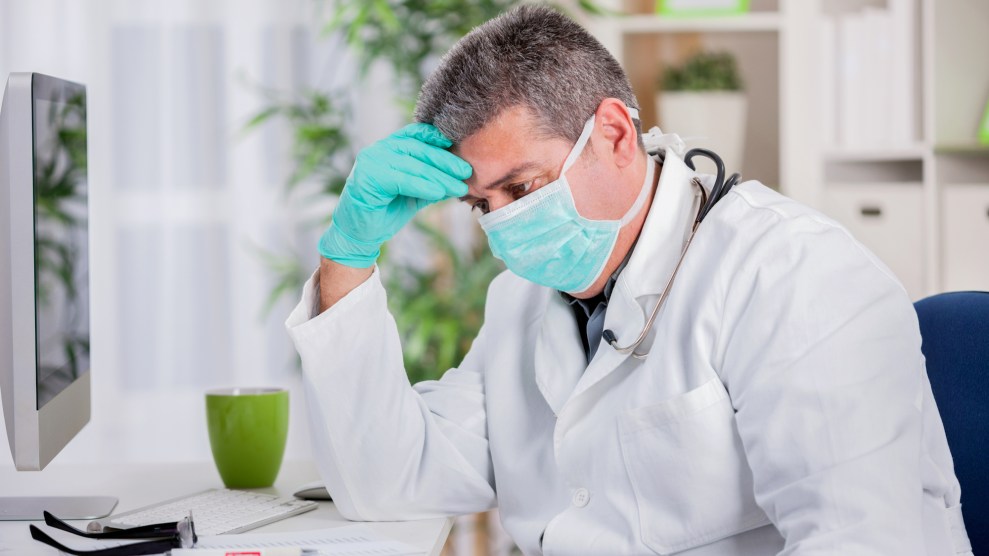 Throughout Donald Trump’s campaign, he and his proxies consistently expressed hostility to government regulation, particularly of the fossil fuel and agriculture industries. Within days of taking over, the Trump administration has already put a squeeze on the two agencies that most directly regulate Big Energy and Big Ag, the Environmental Protection Agency and the US Department of Agriculture.

At the EPA, the administration has  ordered that “all contract and grant awards be temporarily suspended, effective immediately,” ProPublica writers Andrew Revkin and Jesse Eisinger report, quoting an internal EPA email they obtained. Myron Ebell, the climate change denier who led the Trump team’s EPA transition and directs the Center for Energy and Environment at the Competitive Enterprise Institute, confirmed the suspension, Revkin and Eisenger report.

If you can prevent public agencies from conducting vital functions, “you can say they don’t do anything, and justify cutting their funding.”

That’s potentially a massive blow to the agency’s core functions, says Patty Lovera, assistant director of the environmental watchdog group Food & Water Watch. “The EPA’s not necessarily out there running a bulldozer to clean up a toxic site,” she says. Superfund, an EPA program responsible for cleaning up the nation’s most contaminated land, is executed through contracts, she said. The EPA turns to contractors for “tons of water stuff, too”—from monitoring water quality downstream from polluters to helping municipalities update water infrastructure to avoid toxins.

“It’s one thing to put a pause on new contracts so they can be reviewed, but to reach back and stop existing ones is a whole other can of worms,” Lovera said.

In Flint, Michigan, where lead contamination has led to the nation’s most notorious drinking-water catastrophe in years, the announcement brought uncertainty and confusion. “State officials are seeking more information on a U.S. Environmental Protection Agency freeze on grants and contracts and what it could mean to $100 million in federal funds already appropriated for the Flint water crisis,” the news site MLive.com reported Tuesday. In statement quoted by MLive.com, the press secretary for Michigan Gov. Rick Snyder noted that “we haven’t received any guidance from the federal government” about the EPA’s funding to address the Flint crisis.

Andrew Rosenberg, who directs the Center for Science and Democracy for the Union of Concerned Scientists, adds research to the list. The agency funds crucial environmental science through contracts with outside scientists, and interruptions to their funding can be devastating, he said. He likened the situation to the government shutdown of 2013, which temporarily blocked research funding throughout the federal government, including the EPA. In a blog post at the time, Rosenberg quoted an EPA scientist he interviewed on the effects of such interruptions:

A toxicologist who works for the Environmental Protection Agency expressed great frustration that the crucial work of testing chemicals on the market for toxicity has been interrupted. This work had been slow and complex, and short of manpower. Now, things are worse, the scientist writes. “The next time you reach under the sink to pull out a cleaning product, ask yourself if you’d really like to know if it was causing cancer, or if it was safe.” The shutdown, the toxicologist concludes, will keep toxic chemicals on the shelves “longer than they otherwise should have.”

Of course, it remains unclear exactly how far-ranging the contract suspension is—and that brings us to another move from the White House: a media blackout. The Huffington Post‘s Kate Sheppard got hold of an internal EPA email sent to staff Monday blocking all press releases, social-media messages, and blog posts. As for answering queries from journalists, “Incoming media requests will be carefully screened,” the email stated. My own calls and emails to EPA spokespeople on Tuesday went unanswered.

Meanwhile, over at the USDA, a similar media blackout is afoot, reports BuzzFeed‘s Dino Grandoni:

According to an email sent Monday morning and obtained by BuzzFeed News, the department told staff—including some 2,000 scientists—at the agency’s main in-house research arm, the Agricultural Research Service (ARS), to stop communicating with the public about taxpayer-funded work.

“Starting immediately and until further notice, ARS will not release any public-facing documents,” Sharon Drumm, chief of staff for ARS, wrote in a department-wide email shared with BuzzFeed News.

“This includes, but is not limited to, news releases, photos, fact sheets, news feeds, and social media content,” she added.

Food & Water Watch’s Lovera notes that the decree is somewhat ironic, because the Obama USDA itself kept its scientists on a short leash in terms of press access—especially on topics of high importance to the agrichemical industry, like pesticides and genetically modified crops. The plight of former ARS entomologist Jonathan Lundgren, who focused on those sensitive issues, illustrates her point. My profile of Lundgren is here.

“It’s not like USDA scientists were out shouting in the public square,” Lovera said. The recent gag order signals that the Trump team will put USDA research under even tighter control.

If the funding interruptions and media blackouts continue, she said, much of what the USDA and EPA do to study and protect the public from polluting industries will be negated. And that might be the point, she said: If you can prevent public agencies from conducting vital functions, “you can say they don’t do anything and justify cutting their funding.”

On a positive note, all the information that emerged Tuesday on the EPA and the USDA came from internal leaks. Trump may be determined to keep these crucial watchdog and research agencies tightly muzzled, but at least some career bureaucrats and scientists appear unwilling to keep the public in the dark.