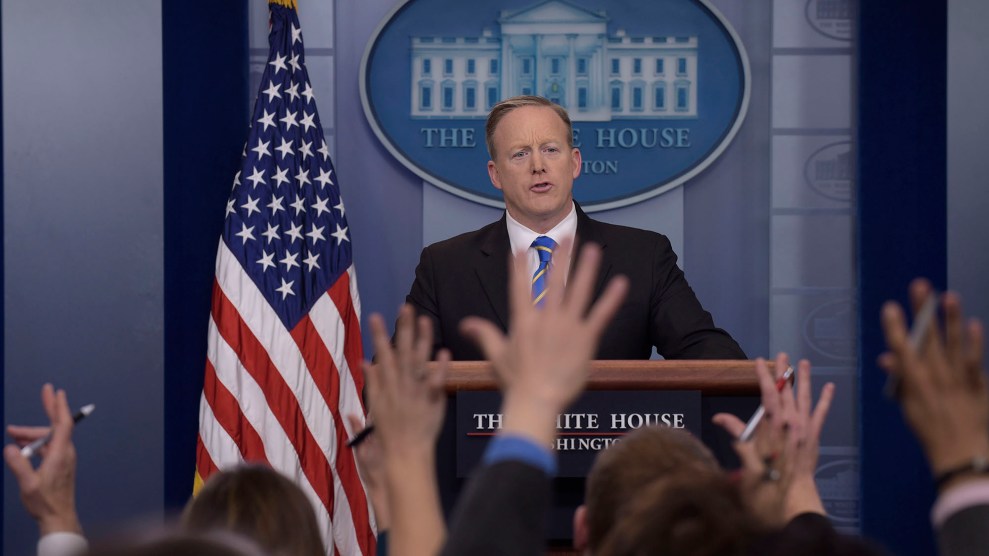 White House Press Secretary Sean Spicer on Tuesday defended President Donald Trump’s false assertion that millions of people voted illegally in the November elections. Spicer repeatedly affirmed that Trump has long held this view, but he could not cite any credible evidence for the belief. Instead, he named a study that does not back up the president’s claims.

“The president does believe that,” Spicer said in response to a question about illegal voting. “I think he’s stated his concerns of voter fraud and people voting illegally during the campaign. And he continues to maintain that belief based on studies and evidence that people have presented to him.”

Asked for specific evidence, Spicer replied, “I think the president has believed that for a while based on studies and information he has.”

This response spurred more questions from reporters throughout the briefing. NPR’s Mara Liasson grilled Spicer on whether Trump will pursue an investigation. “If 3 to 5 million people voted illegally, that is a scandal of astronomical proportions,” she said. “I’m asking you, why not investigate something that is the biggest scandal in American electoral history?” Other reporters asked similar follow-up questions, but Spicer said there are currently no plans for an investigation.

Spicer did cite as evidence a 2008 Pew Research Center report that he said supported Trump’s claim. But it quickly became clear that this was false.

As primary author of the report the Trump camp cited today, I can confirm that report made no findings re: voter fraud. /1

@mariaspinella @PressSec I’m aware of no Pew report, including the ones I wrote when I was there, which support any findings of voter fraud

Members of the media also quickly impugned Spicer’s honesty over the exchange.

It goes without saying but lying about voting fraud is far worse than lying about crowd size.

Spicer’s integrity was already on the line after he gave a series of false statements on Saturday regarding the size of the audience at Trump’s inauguration and then defended those statements in his first full press conference on Monday.

After the election, Trump tweeted that he would have won the popular vote “if you deduct the millions of people who voted illegally.” On Monday, in a meeting with congressional leaders from both parties, Trump reportedly spent the first 10 minutes claiming again that 3 to 5 million “illegals” had voted. But on Tuesday, Spicer assured the press that Trump is “very comfortable with his win.” Trump, Spicer continued, received the most electoral votes of any Republican president since Ronald Reagan. Again, that’s not right: George H. W. Bush got more in 1988.