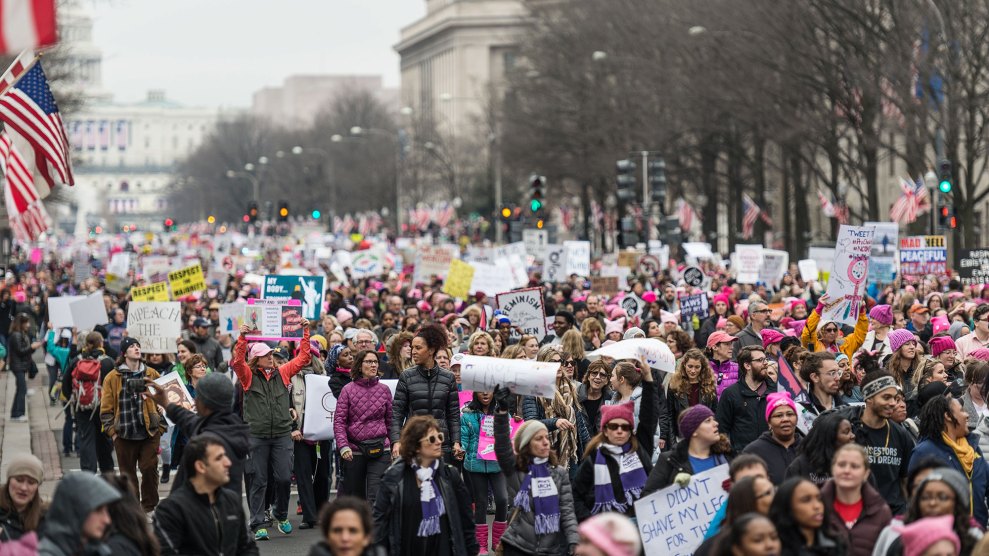 Dramatically larger than expected crowds showed up Saturday at women’s marches in Washington, DC, and more than 600 cities around the world. Mother Jones reporters have been on the scene all day, interviewing protesters and gathering photos and video. In this roundup we’ve collected some of what they saw, as well as highlights from across social media.

On the I95 heading from DC-NYC. Packed. And almost every car seat appears full. Steady but slow. pic.twitter.com/guih1xEp59

Proud of our city. #sf suiting up and showing up in a cold rain. Civic Center Plaza packed. #WomensMarch pic.twitter.com/qiRPTDjZXF

5:50 p.m. EST: President Trump, speaking at CIA headquarters in Langley, insisted (falsely) that his inauguration drew the largest crowd ever for such an event. “As you know, I have a running war with the media,” the president noted. His press secretary, Sean Spicer, followed up by warning that the press would be held “accountable.” Neither man mentioned the massive marches around the nation.

Hey, my colleagues in the media, what are we going to do about a president and press secretary who don’t recognize or respect reality?

We asked women at #WomensMarchOnWashington: What’s your pledge for the next 4 years. Amazing answers: https://t.co/6Hkd5P7gIh #MyPledge pic.twitter.com/fQUxXYGI9y

One of my favorite signs from the #WomensMarchOnWashington! @womensmarch #WomensMarch #WhyWeMarch #whyIMarch #StrongerTogether #democracy pic.twitter.com/4F2pWbRwsQ

You know something’s up when there’s even a #WomensMarch in Lubbock TX, the 2nd most conservative city in the US. During a dust storm. pic.twitter.com/pgq1zluN8Z

Schumer, in NYC as crowd yells. “Don’t back down! One women says. “Save us!” pic.twitter.com/P5gqKwVWdk

3:07 p.m. EST: The Associated Press reports that city officials have said that because the planned route for the march in Washington, DC, “is filled with protesters, a formal march is no longer possible.” Marchers have been diverted along a different route.

A half million people at #WomensMarchOnWashington, oganizers say. That might be twice the size of Trump’s inaugural https://t.co/7yKBGWhH4x https://t.co/uLrMOFrIDL

crowd extends for at least a mile at #WomensMarchOakland pic.twitter.com/ALXwo820SI 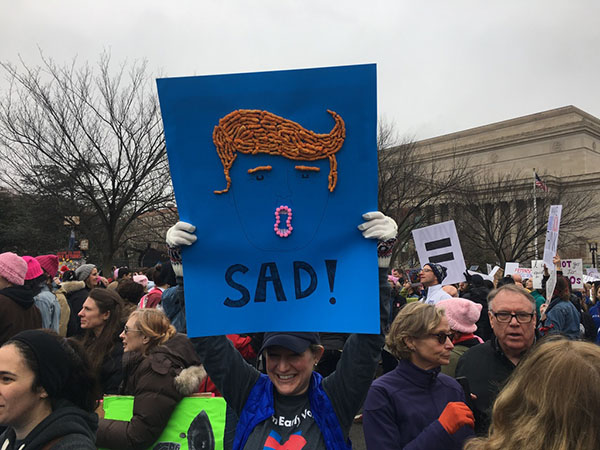 Hair made of Cheetos. Jeremy Schulman

White man carrying this sign for his mother pic.twitter.com/Q4zJDp8wqq

“I can vote in 11 years and my vote will count.” New favorite sign. #womensmarch #wmnyc #womensmarchsigns pic.twitter.com/IUXzGrLR5y

Signs in the street pic.twitter.com/XdULTtlbbc

#WomensMarch is on all 7 continents. Yes, even in Antarctica :https://t.co/FzyWnDfH7Z pic.twitter.com/hmHLtOBEJj

Snow may be falling in Idaho, but women are rising. Pic via @wintrow4Idaho. #WomensMarch #WomensRights #DumpTrump pic.twitter.com/PWVzIWs6XF

The #WomensMarch in downtown St. Louis! This is what democracy looks like. pic.twitter.com/mzb5xMZUKC

Self proclaimed anti-feminist men came out to protest the protest, attracting some attention from #womensmarch pic.twitter.com/Mic20sdVc2

BREAKING: @CNN reports more people on National Mall for #WomensMarch than yesterday at this time for inauguration. pic.twitter.com/cmgQNuCgCo

Due to the large crowd on hand, today’s Woman’s March has been changed to a Rally. pic.twitter.com/IjVelFUrLu

If the #WomensMarch declared a winner. pic.twitter.com/d3KzEY2uRr

Marching to the march pic.twitter.com/bNz1ZDZsIH

This one got a lot of cheers pic.twitter.com/UyZ6kMvFoD

Big cheers on 7th street at the enormous crowd gets its first look down the hill at the even bigger crowd in the mall. #WomensMarch pic.twitter.com/aXGZRlOL7s

Streams and streams of people walking into center of D.C. right now. Every street, a line of people in pink hats #WomensMarch pic.twitter.com/2WQQRpSi2e

I had to get him here. Charlie Brotman, inauguration announcer since Eisenhower dropped by Trump is HERE with us! #WomensMarch ?? pic.twitter.com/Gx0RJCBhUD

9:57 a.m. EST: The DC Metro is packed with attendees headed to the march.

Photos of the Shady Grove Metro station currently. Hearing it’s an hour wait to get on the train. O____o #WomensMarch pic.twitter.com/YOaaQ41v1s

What the same DC Metro station looked like on Inauguration Day vs. what it looks like today pic.twitter.com/gi8GBoqni5