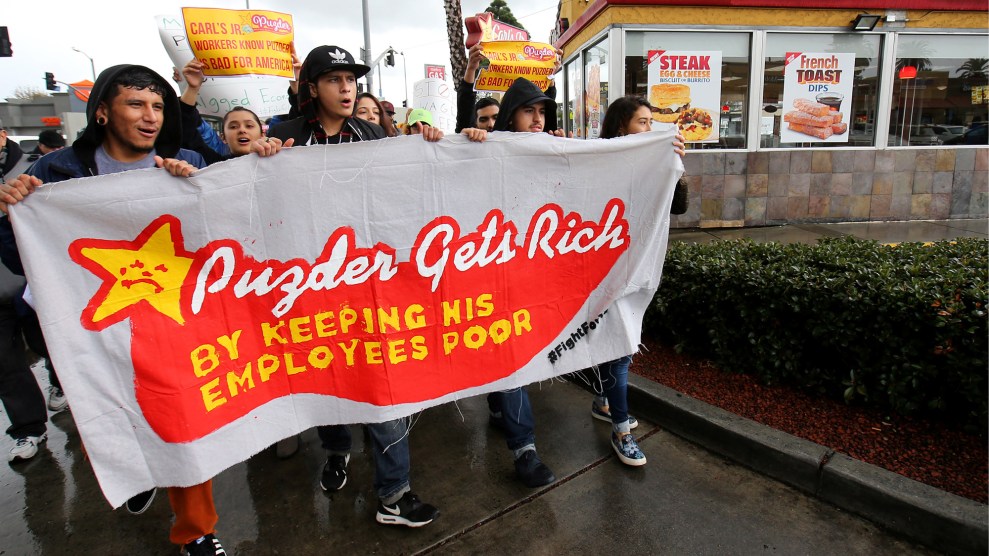 Fast-food workers across the country find the idea of Andrew Puzder as secretary of Labor pretty unappetizing.

Labor nominee Puzder—whose company, CKE Restaurants, controls the Carl’s Jr. and Hardee’s chains—has a Senate confirmation hearing scheduled for Thursday, and employees of CKE franchises are pushing back. Protesters rallied in 24 cities earlier this week with signs of Puzder’s face superimposed with phrases such as “Wage Thief” and “Tax Cheat.”

The protests were organized by the minimum-wage campaign Fight for $15, which in late January held a press call with employees to announce the coordinated filing of legal claims against CKE franchise owners. “Take it from someone who knows firsthand,” Torrance Chambers, a 36-year-old Hardee’s employee from Birmingham, Alabama, said during the call. “Andy Puzder doesn’t respect working people.”

Chambers said in the three years he’s worked at Hardee’s, he’s never gotten a raise over the federal minimum of $7.25 an hour. What’s more, he is paid with a preloaded debit card, the basis for a labor violation claim he and his co-workers filed with the Labor Department in January. “Getting the money that’s on the card isn’t free,” he said. “It comes with $2, $2.50, or even $3 withdrawal and transaction fees at many ATMs and banks. All those fees add up to hours worth of work that goes unpaid. And it means that, at the end of the day, I and many co-workers at Hardee’s are paid less than the federal minimum wage. Forget $15—Andy Puzder and his company are against a minimum wage of $7.25.”

The owner of the franchise where Chambers works noted in an email that employees with bank accounts get a direct-deposit option, and those who get debit cards are not charged any fees if they withdraw their paycheck all at once from a participating ATM. George Thompson, a spokesman for Puzder, took issue with the notion that his boss believes in stiffing employees. “Only 2 percent (114) employees at Andy Puzder’s company actually make the minimum,” he wrote in an email, so Chambers’ claim “is not based in fact.”

“Companies can certainly set standards…like Subway has with its franchisees,” to make sure “baseline” laws are followed.

Yet the CKE franchise workers filed a total of 34 claims over a week in January, alleging 23 wage and hour violations, 7 unfair labor practices violations, and 4 sexual-harassment violations. (A handful of subsequent claims brings the total to 39.) CKE did not respond to written questions from Mother Jones related to the claims, but at the time of the protest group’s press call, a CKE spokesman offered a statement: “While we do not comment on pending litigation, we’d like to offer a reminder that CKE Restaurants is nearly 95 percent franchised. Each of these 2,769 franchise stores are run independently and solely responsible for their employees, management and adherence to regulations and labor practices.”

Asked about this line of defense during the Fight for $15 press call, Cathy Ruckelshaus of the National Employment Law Project responded, “It’s my understanding that none of these claims have actually charged CKE with violations. But the magnitude of these violations and the pervasiveness of them suggests that the culture at the company is not one of complying with these basic laws.”

She continued, “Companies can make a choice about who they operate with, who they contract with in a franchise agreement. And they can certainly set standards and issue directives, like Subway has with its franchisees, to make sure that baseline minimum wage, health and safety, and discrimination laws are followed.”

Tom Perez, Obama’s labor secretary, interpreted current workplace laws to mean that parent companies could be held accountable for the behavior of franchise owners—but labor law may be viewed differently under the Trump administration.

Employees in Las Vegas say they were pressured to work unpaid overtime and were not paid for breaks as required by law.

Taken together, the claims filed last month seem to depict a corporate culture designed to maximize profits regardless of employees’ well-being, and one that is quick to stifle workers’ efforts to improve their conditions.

A female worker in Tampa, Florida, alleged that her shift manager threatened her with sexual violence after repeated incidents of harassment, saying, “If you don’t start giving me what I want, I am going to start taking.” When she reported the incident to a different supervisor, she was moved to a less desirable shift, she said, where she made less money. (Reached by phone, the franchise owner in question said he was unaware of the claim.)

An employee in Whittier, California, made a similar claim; she was harassed during the graveyard shift by a male co-worker, she said, yet was repeatedly scheduled to work with him even after she reported the harassment to her manager. After she finally refused to work with the man, she was fired, according to her claim. (The owner of her franchise said in an email that the woman was fired for “repeat absenteeism and multiple service audit failures.” He added, “We are investigating this claim and will take action based on the results of the investigation.”)

In Oakland, California, a male fast-food worker said his manager routinely harassed him about his sexual orientation. In nearby Alameda, an employee alleged that compensation for several hours of overtime has been routinely withheld from her over the course of five years. Sometimes she is paid for only 8 of the 10 hours she works per day, she says.

CKE franchise employees in Las Vegas say they were pressured to work unpaid overtime and were not paid for breaks as required by law—their manager, they alleged, routinely manipulated time records to reduce labor costs. The workers also allege that they faced an overly broad prohibition on discussing working conditions, and were told not to speak to the press or union organizers. They received an email that read, “It is company policy that no one in this franchise is to talk to any reporter or individual asking questions about our operations.” The email stated that the mandate was “part of our franchise agreement with CKE and that “employees who fail to observe this policy will potentially face disciplinary action.”

Puzder’s spokesman calls Fight for $15 an “astroturf” group whose “activists have attacked Andy Puzder with baseless and fabricated claims.”

A claim from Durham, North Carolina, alleges that job applicants at one CKE franchise were asked whether they supported Fight for $15’s efforts to increase the minimum wage. Managers at that same franchise, the claim says, surveilled and photographed workers participating in a workers’ rights rally, filed a police report against a union employee who was attempting to speak to workers, and fired an employee in retaliation for participating in union activity.

A Los Angeles worker, Ivan Nava, said that when his manager “found out that I had started organizing for the Fight for $15, she cut my hours from six to eight hours a day down to as little as four hours a day, and started scheduling my shifts when she knew I had college classes.” He filed a claim accusing the franchise of “implicitly threatening Ivan Nava with retaliation for engaging in union activity.”

The Department of Labor is responsible for enforcing the federal minimum wage. The agency is also tasked with making sure American workers get paid for all the hours they work, that labor conditions are safe and humane, and that workplace discrimination and sexual harassment are discouraged—and taken seriously when they do occur.

But even prior to the January complaints, CKE’s franchisees had a questionable track record in some of these categories. In a survey of hundreds of CKE franchise employees conducted by an advocacy group for restaurant workers, 66 percent of the female respondents reported being subjected to “unwanted sexual behaviors” at work—the industry standard is 40 percent.

Fight for $15 cites a report by the investigative publication Capital & Main showing that, since Puzder took over as CEO in 2000, Carl’s Jr. and Hardee’s have been sued for federal employment discrimination more often than any other American hamburger chain. Thompson, Puzder’s spokesman, points to a rebuttal in Investor’s Business Daily by the conservative economist Diana Furchtgott-Roth.

The Century Foundation, a progressive think tank, noted in a recent report that from 2000 through 2016, the Occupational Health and Safety Administration found 91 safety violations at CKE franchises—32 were listed as serious, meaning they “could result in death or grave physical harm.” Because fast-food restaurants are not subject to random OSHA investigations, the authors argued, each of the violations must have resulted from an anonymous complaint: “What is clear is that CKE is a representative of the kind of corner-cutting that hurts workers.”

“Recently the restaurant I worked at went an entire month without paying me a dime,” claimant Angel Gallegos, who works at a Carl’s Jr. in Los Angeles, said during the Fight for $15 press call, “and they only agreed to pay me after I stopped coming to work in protest. If Andy Puzder can’t be trusted to pay his workers what they’ve earned, why should we expect him to enforce laws meant to protect working Americans?”

Thompson dismisses Fight for $15 as an “astroturf” group whose “activists have attacked Andy Puzder with baseless and fabricated claims.”

Gallegos’ sentiment was echoed by many of the CKE franchise workers who have hit the streets to protest Puzder’s nomination. “Andy Puzder makes more in a DAY than I make in a YEAR,” read one protest sign in St. Louis. “Puzder gets rich by keeping workers poor,” read another one in Philadelphia. “Andrew Puzder is a rich fast food CEO, not our labor secretary,” said signs in Chicago.

Fight for $15 has also mobilized non-CKE fast-food employees to rally against the nominee. And the Economic Policy Institute and Jobs with Justice have teamed up for a joint initiative to defeat Puzder, whom they call “grossly out of touch with Americans who struggle to make ends meet” and “an especially dangerous choice for Labor Secretary.”

The protesters have found allies in Sens. Elizabeth Warren (D-Mass.) and Patty Murray (D-Wash.), who released a report containing testimonies from a range of CKE franchise employees. The senators didn’t mince words:

“The accounts in this report make clear that workers at Mr. Puzder’s restaurants are overworked and underpaid and lack basic benefits, and that he has repeatedly refused to stand up for workers during his tenure as CEO of CKE Restaurants, Inc. They provide new and compelling evidence that Mr. Puzder is unqualified to lead the Department of Labor.”?

Then again, concerns about lack of qualifications has yet to stop any of President Donald Trump’s cabinet picks.