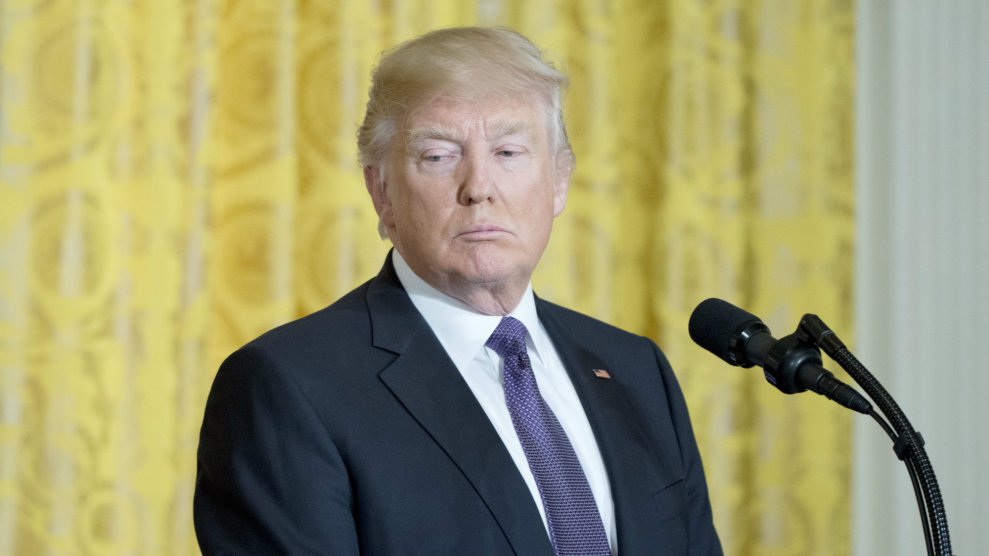 There is an old chestnut that gets tossed out whenever a scandal hits: It’s not the crime, it’s the cover-up. The saying traces back to Watergate. Sen. Howard Baker, the top Republican on the Senate Watergate committee, once noted, “It is almost always the cover-up rather than the event that causes trouble.” This week, following the resignation of national security adviser Michael Flynn, NBC News’ Chuck Todd was one of many who quipped, “It’s not the crime, it’s the cover-up.” And that was certainly a significant element of the Flynn imbroglio: Flynn had lied about his December conversation with the Russian ambassador, concealing the fact that they had discussed the sanctions President Barack Obama had just levied on Russia as punishment for its covert efforts to swing the 2016 election to Trump. But in this case the bigger scandal at hand is not a cover-up. It is the thing itself: the connections between the Trump camp and Moscow during the campaign, when Vladimir Putin was trying to subvert American democracy.

* Days after the election, Russian deputy foreign minister Sergei Ryabkov said in an interview that “there were contacts” between the Trump team and the Kremlin. He noted, “Obviously, we know most of the people from his entourage.” Trump spokeswoman Hope Hicks immediately said the campaign had “no contact with Russian officials” before the election.

* At Trump’s January 11 press conference, a reporter asked him, “Can you stand here today, once and for all, and say that no one connected to you or your campaign had any contact with Russia leading up to or during the presidential campaign?” Trump did not reply. But after the press conference ended and Trump was leaving, he did answer that query with a firm “no.”

* On January 15, on Face the Nation, John Dickerson asked incoming Vice President Mike Pence, “Did any adviser or anybody in the Trump campaign have any contact with the Russians who were trying to meddle in the election?” Pence declared, “Of course not. And I think to suggest that is to give credence to some of these bizarre rumors that have swirled around the candidacy.”

* On February 14, at the daily White House briefing, ABC News’ Jonathan Karl asked press secretary Sean Spicer whether any Trump associates were in touch with the Russian government prior to the election. Spicer replied, “There’s nothing that would conclude me that anything different has changed with respect to that time period.” That contorted statement was clearly meant as a no.

The drift is clear. Whenever queried about this highly sensitive matter, Trump and his minions have said there were no contacts between anyone in his crew and the Putin regime during the 2016 campaign. This is a cover-up.

There is evidence that Trump associates did interact with Russian officials during the campaign. The Washington Post story that broke open the Flynn affair a few days ago also reported that the Russian ambassador had told the newspaper he had been communicating with Flynn during the campaign. At that point, Flynn was Trump’s senior national security adviser. (As such, Flynn attended in mid-August the first briefing Trump received as the GOP nominee from the US intelligence community, during which Trump and Flynn were told that US intelligence agencies had concluded Russia was behind the hacking and leaking that targeted Democrats.) And on Tuesday night, the New York Times reported that intelligence intercepts indicated that several Trump associates had “repeated contacts with senior Russian intelligence officials in the year before the election.”

In late October, I reported that a former foreign counterintelligence officer had sent memos to the FBI indicating that the “Russian regime has been cultivating, supporting and assisting TRUMP for at least 5 years” and that Trump “and his inner circle have accepted a regular flow of intelligence from the Kremlin, including on his Democratic and other political rivals.” The memos also claimed that Russian intelligence had “compromised” Trump during his visits to Moscow and could “blackmail him,” and that Russian intelligence had compiled a dossier on Hillary Clinton based on “bugged conversations she had on various visits to Russia and intercepted phone calls.”

On Tuesday, I bumped into a prominent Republican consultant, and he said that Trump had to “get out in front of” the burgeoning scandal and disclose all the facts because “the cover-up is always worse.” The Washington Post‘s Chris Cillizza offered similar advice to the president on Wednesday morning: “What is really needed at this point is a full and complete debrief for the American people from Trump himself. Why was his campaign in ‘constant’ contact with Russian officials? Who in the campaign—or the broader Trump organization—was involved? Are they still with the campaign or the business? What was discussed on these calls?…Why is Trump so reluctant to condemn Russia and Vladimir Putin in particular?”

But the cover-up here may not be worse than the actions being covered up.

At a minimum, it seems that Trump associates—at least Flynn—were secretly interacting with the Putin regime as it was plotting to subvert American democracy to help Trump win the White House. A key question is obvious: What did they discuss? The darkest possibility is that they talked about the Kremlin assault on the US election. Short of that, might Flynn or others have encouraged Putin’s clandestine operation by signaling that Moscow would have an easier time with a Trump administration than with a Clinton administration? Were there any winks or nods? After all, in late July, Trump called on Russia to hack Clinton. Whatever was discussed, any Trump associate who spoke with Russian officials during the summer or fall of the campaign had reason to know that he or she was interacting with a member of a regime that was actively attempting to undermine the election in a manner beneficial to Trump.

The cover-up here may not be worse than the actions being covered up.

How can Trump and his crew concede that they were hobnobbing with a foreign government that was waging political warfare against the United States? The “full and complete debrief” that Cillizza advocates would require Trump to acknowledge that he and his team have covered up these contacts and explain why. This “full and complete debrief” could well show that Trump’s camp cozied up to a repressive government that was seeking to destabilize US politics to help Trump. It could reveal that Trump associates directly or indirectly encouraged Putin’s attack on the 2016 election.

Trump would lose all legitimacy as president were he to admit that anything of this sort transpired. There are some deeds that cannot be acknowledged. Expecting Trump and his lieutenants to confess that his campaign or business associates were networking with the Kremlin or Russian intelligence is not realistic—especially after their months of denial. (Trump also for months refused to accept the US intelligence assessment that Russia was behind the hacking and leaking aimed at Democratic targets, and when he finally bent on this point, he downplayed Moscow’s meddling in the election.) Trump cannot continue to present himself as the triumphant winner of a fair election if it turns out his own people were palling around with Moscow.

Another famous line is this: You can’t handle the truth. Further revelations about contacts between the Trump camp and Russia could pose an existential threat to the Trump White House. The clear choice for him and his gang is to deny, to stonewall, to distract, to lie. Trump doesn’t explain the pre-election contacts; he complains about leaks. He casts all interest in this controversy as merely the revenge of the Clinton losers. He calls reporting on the Russia connection “fake news” and slams journalists pursuing the Flynn story as “fake media.” This is not shocking. He might not be able to survive a full accounting. The poison of the cover-up may be less deadly than the poison of the event itself. Only Trump and the people involved can know for sure. But investigations of the Russian contacts now being conducted by the FBI and the congressional intelligence committees—if they are mounted effectively and yield public results—may eventually allow us to see the full calculation. In the meantime, the public can justifiably conclude that when it comes to Trump-Russia connections during the campaign, the Trump team has been covering up for very good reasons.