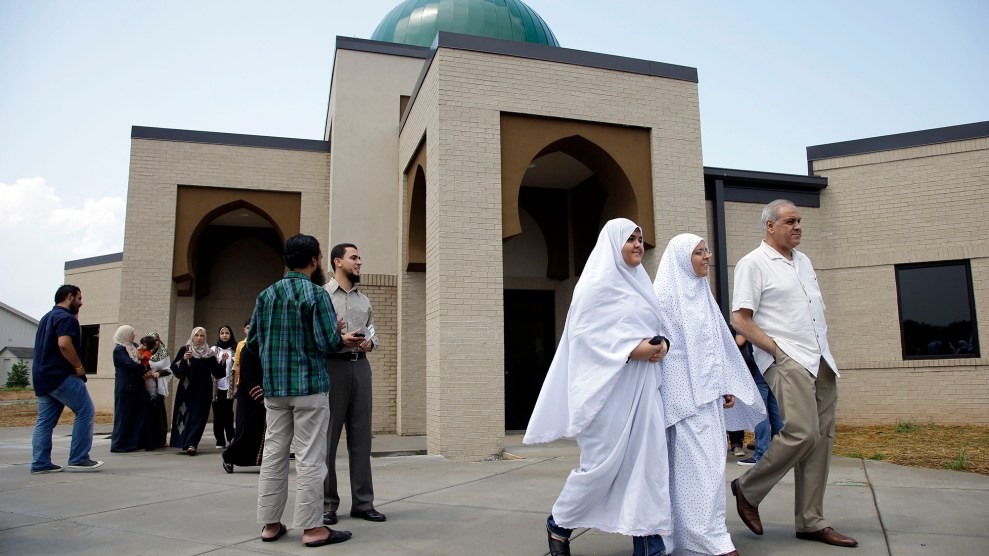 In August 2012, a mosque opened in Murfreesboro, Tennessee, a bustling college town outside of Nashville that is home to students, long-time residents, refugees, suburban families, and everyone in between. The national headlines for the stories about the event suggested some of the conflicts that had led to this moment: The New York Daily News wrote, “Tennessee Mosque Opens After Years of Controversy,” the New York Times wrote  “After a Struggle, Mosque Opens in Tennessee”, and NPR wrote “Murfreesboro Mosque Finally Opens.”

But the summer day when it opened was peaceful and harmonious, with the exception of a lone protester, wearing an “I Love Jesus” hat and a shirt bearing the 10 Commandments. The day was one for celebration, and the members of the Muslim community who had gathered were not dwelling on the fact that during court battles over permits, Rutherford County had spent more than $340,000 in legal fees fighting the right to build this place of worship. Or that the lieutenant governor of Tennessee at the time, Ron Ramsey, had described Islam as a “cult” while voicing opposition to the mosque.

Schoolchildren have come home crying because other children asked if their headscarves are hiding a bomb.

The community itself was split between those attacking the approximately 300 families of the mosque for being Muslim and those who banded with their Muslim neighbors. The peaceful community was the target of a bomb threat—the anonymous caller, later found to be a Texas man, promised it would go off inside the office space where the community was worshipping in the interim on Sept. 11. A vandal scrawled “not welcome” across a sign announcing the construction of the Islamic Center of Murfreesboro. Construction equipment used to build the walls of the mosque was set on fire, its charred remains a warning to worshippers that they were not safe. But after two troubled years, the mosque finally opened, and residents began to take its presence on Veals Road for granted.

Then Donald Trump was elected, and the anti-Muslim rhetoric that once inflamed the Bible Belt town of 126,000 was reignited.

Murfreesboro is home to a very small fraction of American Muslims, but it was primed for a backlash in a unique way. Most residents remember the saga of the mosque, and the Baptist church next door made its anti-Islam position very clear by erecting 13 10-foot-tall crosses into the ground “to make a statement.” There are residents of Murfreesboro who stood with their Muslim neighbors, leaving flowers and handwritten cards at the front door of the mosque, but there are increasingly louder voices that threaten the safety of others who happen to be Muslim. It’s a sort of microcosm of what has happened across the country, where tensions and even violence have escalated against Muslims in the wake of the inflammatory rhetoric of President Donald Trump.

“People are afraid, and they won’t tell others about [harassment],” says Saleh Sbenaty, a leader in the Muslim community, who was deeply involved in the struggle to get the mosque built. “It’s really scary and dangerous.”

He added that some members of the mosque have told him they are considering not attending services because they are frightened of the possibility of an attack. When news broke that a mosque in Texas had been set on fire shortly after Trump announced an executive order temporarily banning refugees from seven predominantly Muslim countries, they prayed for safety. When a shooting at a Quebec City mosque by a 27-year-old white male who was reportedly “a right-wing troll who frequently took anti-foreigner and anti-feminist positions and stood up for U.S. President Donald Trump” left six dead and more injured three days after Trump’s executive order, they felt their worst fears were being confirmed.

“The people who are supposed to protect us are singling our community out.”

The Sbenaty family left Syria because it was unsafe, and they wanted a better life for themselves and their children. His daughter Dima was born in Damascus, but her mother brought her to the United States when she was eight months old to join Saleh, who was earning his PhD at the time. Their son, Salim, was born in Murfreesboro. A week after the inauguration, 20-year-old Salim, was waiting tables at a local restaurant when he was asked, “Son, where are you from?”

“I was born and raised here in Murfreesboro,” he replied.

The response was abrupt. “You look foreign.”

“My parents came from Damascus a long time ago,” Salim said. The man stared.

Later that night, he told his father, who was horrified, and asked how he responded. Salim said the man had probably never met anyone who looked like him before, and he did not want to deepen his hatred. Saleh says many people in the Muslim community in Murfreesboro would have done the same, although he encouraged his son to report the incident.

During his campaign, Trump went back and forth on a proposal to create a “Muslim registry.” When he was asked about it in November 2015, he said, “We’re going to have to look at a lot of things very closely. We’re going to have to look at the mosques.” Later, he said he wanted to have a database on Syrian refugees who immigrate into the United States. Less than a month later, in December 2015, he proposed banning all Muslim immigration. Trump has consistently talked about the threat of “radical Islam,” and in an interview with CNN last year, he told Anderson Cooper, “I think Islam hates us.”

Steve Bannon, Trump’s chief strategist, has also been vocal about his views on Islam. “We are in an outright war against jihadist, Islamic fascists,” Bannon said in a 2014 speech. He also said the religion was metastasizing—like cancer.

Some Tennessee lawmakers have spouted similar claims—Tennessee state Sen. Mae Beavers told town hall attendees on Feb. 16 that Muslim terrorists were “infiltrating churches” and planning jihad in the Bible Belt. She also has expressed support for Trump’s “Muslim ban.” Rep. Marsha Blackburn, who served as a vice chair of Trump’s transition team, said Trump’s immigration order was a “security test, not a religious one.”

“Our intelligence and security agencies must ascertain the scope of the Islamic terror threat in order to develop proper refugee vetting protocols—if possible,” she wrote in an op-ed for The Tennessean.

And now, according to a report by the Southern Poverty Law Center, anti-Muslim hate groups have tripled since 2015.

Ossama Bahoul, the former imam at the Islamic Center of Murfreesboro, said there is a big difference between what the Muslim community in Middle Tennessee went through when the mosque was being built and what is happening now. Back then, the government was on their side—it defended his people’s right to worship and promised to take swift action against anyone who threatened them. Now, he hears the Islamophobia that used to come from the mouths of protesters coming from the government. “It is really disturbing for me to be talking about this,” Bahloul said. “The people who are supposed to protect us are singling our community out. That’s tough.”

Bahloul and Saleh Sbenaty tell Mother Jones about women who had been threatened for wearing the hijab and sometimes, Bahloul said, people have tried to assault them. Schoolchildren have come home crying because other children asked if their headscarves are hiding a bomb. Other Muslims have told him they have heard mutterings of “it’s about time to clean up America” and “go back home” when they pass by.

“They are American kids, and they will come at a very young age and say, ‘Why do they hate us?'”

Recently, when another student at school referred to one of the children in his congregation as “Bin Laden,” Bahloul found himself at a loss. “[Our] kids were born in America—they don’t speak any language but English,” he said. “They are American kids, and they will come at a very young age and say, ‘Why do they hate us?'”

The effects of Trump’s comments about Muslims is not restricted to the random acts of violence directed at Muslims in the United States. The executive order he signed banning refugees and immigrants from seven predominantly-Muslim countries—including Syria—mean the Sbenatys and other families fear they’ll be separated from family members for quite some time. Saleh hasn’t seen his mother, who is 83, in 11 years. He wants to bring her to America, but the recent events make that seem unlikely. His siblings got married after he left Syria, and he has nieces and nephews he has never met. Minutes after the Ninth Circuit Court filed a preliminary injunction against Trump’s immigration order, effectively putting it on hold, Trump tweeted, in all caps: “See you in court, the security of our nation is at stake!”

“Now there is no option for me to go and visit or for them to come over here,” Saleh told Mother Jones before the court ruling. “It’s something you cannot explain in words.”

Dima Sbenaty, Saleh’s daughter, is a 27-year-old clinical coordinator for the stroke unit at Vanderbilt University Medical Center in Nashville. The week after Trump’s “Muslim ban” took effect, she spoke at a vigil in support of Muslim Americans. Thousands showed up. “Islam taught me to give back…As a Muslim, it is my obligation to you to be strong, to uphold justice, and to protect your rights,” she told the crowd that night. “That is how America raised me.”

Recently, she decided to start wearing a hijab, and because of the outward signifier that she is Muslim, she has encountered some animosity in the workplace. Sometimes, when she’s out running errands, she gets an uncomfortable sensation, like she’s being watched by someone with less-than-friendly intentions. But she’s determined not to let fear rule her. “I’m practicing my freedom by covering my hair; I’m practicing my freedom by saying that I’m Muslim and going to the mosque,” she tells Mother Jones. “That’s my freedom as an American, and I don’t think I should be afraid…Refugees are leaving a place where they’re being dehumanized. They’re coming into [America] to seek refuge, and they’re entering another hell.”

As for Imam Bahloul, he is still wrestling with how to explain to the community what is happening and how to deal with being targeted. “For a girl to cry and say, ‘I want to cover my hair, but I’m scared,’ that girl must not be scared in America,” he said. “We’re part of the American fabric.”