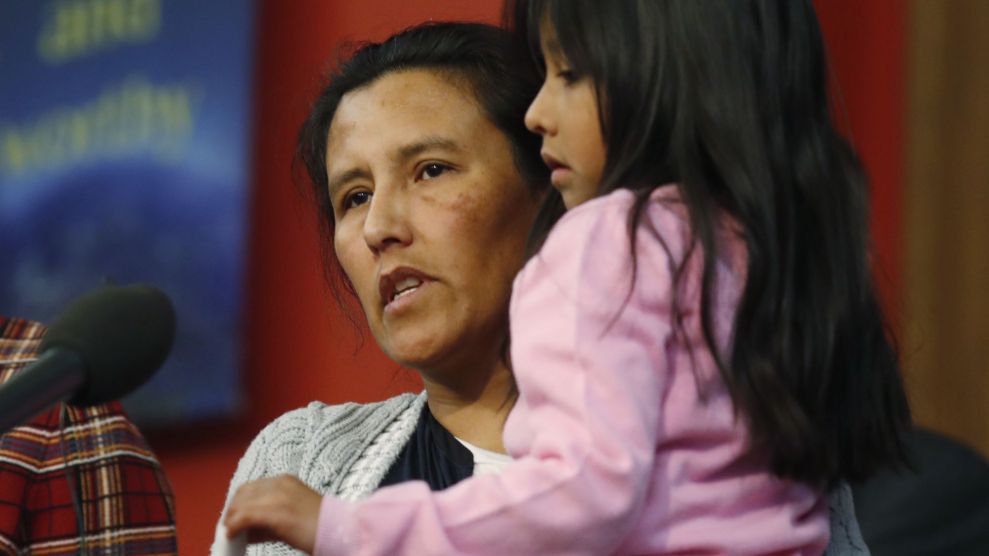 For the past eight years, Jeanette Vizguerra had shown up for every one of her required check-ins with US Immigrations and Customs Enforcement. Though Vizguerra, an undocumented immigrant from Mexico, had been issued a deportation order for two misdemeanors in 2011, ICE officials had previously granted her requests for a stay of removal and allowed her to remain in the country with her four children.

But last week, Vizguerra took a different route. Fearing deportation, she took refuge in the First Unitarian Society in Denver and declared sanctuary. The decision proved prescient: The day of Vizguerra’s scheduled check-in, ICE officials told her attorney that Vizguerra’s request to remain in the country had been denied.

Because ICE has a longstanding policy to not enter churches and schools, Vizguerra will be shielded from deportation. But that means that she’ll have to stay in the church indefinitely. “I did not make this decision lightly,” Vizguerra said through an interpreter, according to NPR. “I was thinking about it for weeks. But I think that I made the right decision in coming here.”

Vizguerra may be one of the first undocumented immigrants to seek this kind of refuge since Donald Trump’s election but, for months, churches have been preparing for exactly this possibility. Since the election, faith-based organizers and leaders have ramped up their work as part of the sanctuary church movement, a campaign among organizers and clergy to help undocumented immigrants facing deportation. More than 700 congregations have signed on to a sanctuary pledge, with the number of participating congregations doubling since the election, says Noel Andersen, a national grassroots coordinator at Church World Service, an international faith-based organization. New sanctuary coalitions have popped up in Ohio, Iowa, Wisconsin, and North Carolina.

In many ways, this has all happened before. Churches played a huge role in sheltering Central American migrants in the 1980s, when civil wars brought an influx of border crossings. They reached out to immigrants again in 2007, when workplace raids were a common tactic among ICE officers. During the Central American child migrant surge in 2014, congregations revived the movement, opening up their doors to children and families fleeing violence. Churches were able to offer a safe haven to immigrants facing deportation and, in some cases, help individuals win temporary relief from removal.

Now, organizers say, Trump’s anti-immigrant rhetoric and policies have spurred leaders to continue that movement and expand it to other communities targeted by the administration, such as Muslim and LGBQT communities. They’re also looking toward other types of community organizing, such as rapid-response and know-your-rights trainings.

“The broader strategy is to shine a light on what ICE is doing.”

Peter Pedemonti, director of the New Sanctuary Movement of Philadelphia, has focused his efforts on a “sanctuary in the streets” campaign, a rapid-response network of volunteers who are trained to peacefully disrupt ICE raids. In a raid in Philadelphia last week, Pedemonti says 70 people showed up outside an ICE office within 20 minutes of being notified. “The broader strategy is to shine a light on what ICE is doing,” he says. “We want ICE to know that if they come into our neighborhoods and try to drag away our friends and neighbors, we are going to be there to slow it down and disrupt it.”

In Los Angeles, Guillermo Torres, an organizer with Clergy and Laity United for Economic Justice, says that the group’s congregations have been working with the National Immigration Law Center to develop rapid-response trainings. They want to train people to film encounters, interview witnesses, and build prayer walls around ICE officers. CLUE is also trying to enlist faith leaders who would be willing to go to detention centers after raids to talk to ICE officers or to serve as a source of spiritual support to detainees.

Torres says he’s seen a “surge” in clergy leaders expressing interest in the movement, many of whom he’d never met before. “The darkness that’s coming out of the president and his administration has created a lot of pain and sadness in in the faith community,” says Torres, “and that pain is compelling leaders to move to a level they’ve not moved before.”