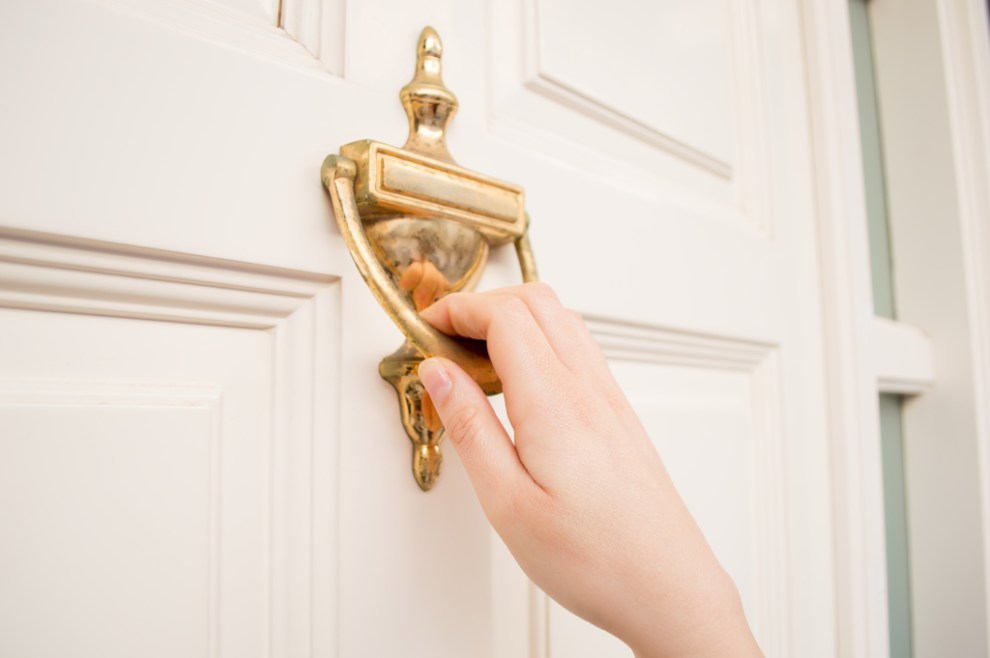 On an icy Saturday afternoon in early February, the rebuilding of the Democratic party was happening in Jessica Williams’ Long Island living room. Williams, a social worker who in her free time hosts a podcast about dance, supported Bernie Sanders during the presidential primary but hadn’t volunteered for a political campaign in years. Everything changed in November. “I was like, holy crap, this democracy business is a whole lot more fragile than I realized,” she says.

Williams discovered a new group, Knock Every Door, that was organizing post-election canvasses in areas that had swung toward Trump in November. She signed up to host her own event and posted an invitation on Facebook. Eight people, mostly millennial supporters of Sanders who had never canvassed before, responded.

Their assignment was to go door-to-door in Williams’ neighborhood in Stewart Manor, New York, asking anyone who was home a series of questions about the 2016 election. But it was a wholly different kind of canvassing than the kind typically conducted by political campaigns, which target select voters from curated lists and train volunteers to be as efficient as possible. Williams did not have a list of names. There was no literature to hand out. She had no candidate or policy to talk up. The object was to get voters talking about the election—and not let them stop.

“Think of this as like a Terry Gross interview,” Williams suggested, as they munched on pizza before heading out. “We’re just trying to get them to open up a little more.” Each volunteer toted a clipboard with several pages of questions (“How do you think the country will change in the next four years?” “Who do you think will benefit as a result of Trump being president?”) designed to give structure to the conversation.

Knock Every Door—formed in January by a group of Sanders campaign alums and led by his organizing guru Becky Bond—is an oddity among the hundreds of liberal groups that have popped up in the wake of Trump’s election. The name gives away its mission; the group is focused on reaching two groups of voters: people who voted for Obama in 2012 and then flipped to Trump four years later, and the people who simply didn’t vote at all.

“Think of this as like a Terry Gross interview,” Williams suggested, as they munched on pizza before heading outside. “We’re just trying to get them to open up a little more.”

Part of the mission is data-collection. Bond, who helped build Sanders’ national field organization, believes that the party’s fealty to Big Data and analytics caused it to miss something significant, and perhaps obvious, about the electorate. Knock Every Door wants to hear from the voters Clinton missed to make sure that doesn’t happen again. “We find ourselves in an election and we don’t know how to talk to people,” Bond says. The group plans to turn over the info it gathers to local Democratic groups, so that candidates will know who to connect with and how.

But the group also believes that the style of conversation itself, known as “deep canvassing,” could play a part in winning these voters over. Bond’s theory, inspired by the groundbreaking work of the Leadership Lab, a gay-rights organization in Los Angeles, is that the most effective way to soften people’s politics may be to hear them out. The Leadership Lab schools its canvassers in personal, and long-winded encounters—in contrast to the staccato interactions campaigns usually emphasize. The results are intriguing: A 2016 study in Science found that a 10-minute conversation with one of the Leadership Lab’s organizers caused voters to view transgender rights more favorably three months down the road.

For its grand ambitions, Knock Every Door has been assembled with duct tape and scratch paper. Bond and a few co-conspirators came up with the idea 10 days before the inauguration and held their first series of canvasses on the day of the women’s march. A Sanders colleague lent them a peer-to-peer messaging service he’d devised for the campaign to help wrangle the thousand people who signed up within the first 30 days, and two other veterans of the campaign’s digital operation built a website. Bond folded the group into an existing political action committee she’d set up, and a Sanders donor promised to match all donations up to $15,000. It was enough, anyway, to get the operation off the ground and into the streets.

Its numbers are growing fast. In February, Knock Every Door joined forces with SwingLeft, a new organization formed after the election that matches progressive activists with the nearest competitive congressional district. Starting in March, SwingLeft’s members will start going door-to-door in swing districts engaging in deep canvassing using the script distributed by Bond. The partnership expanded Bond’s pool of volunteers by several orders of magnitude; within a few days of its first conference call with SwingLeft, Knock Every Door had picked up more than 800 new canvassers. So far members have already held 53 canvasses in 22 states.

Bond is not the only progressive organizer who believes the party’s grassroots need to reintroduce themselves to their neighbors. In Nebraska, where Sanders supporters recently took charge of the struggling state party, Democrats are planning to embark on a statewide canvass that will, they hope, reach every door in the state. (Or almost every door—Tom Tilden, an associate chair of the state party, said that while they hoped to reach every house in the state’s small towns, the canvass would be more selective in population centers such as Lincoln and Omaha.)

These post-election exercises share a common inspiration in the work of the Leadership Lab and its founder, Dave Fleischer, who began experimenting with deep canvassing after his state passed Prop 8, a constitutional amendment prohibiting same-sex marriage. Fleischer has offered pointers to Knock Every Door but has no role with the group. “It reminds me of 2008 in California,” he said of the climate on the left today. “The polls all showed the LGBT issue winning, and then we lost. We didn’t understand what had happened.”

Fleischer understood the anger at voters who had turned against his community, but where his peers turned to protest, he focused on persuasion. If enough Prop 8 supporters could have friendly—but candid—conversations with LGBT canvassers like himself, maybe it would move the needle. After years of tinkering, he settled on a script that appeared to work. Since then, progressive organizers have flocked to LA like Jedi to Dagobah, anxious to crack the code and try out his techniques in their communities.

“It reminds me of 2008 in California,” he said of the climate on the left today. “The polls all showed the LGBT issue winning, and then we lost. We didn’t understand what had happened.”

On the day after the inauguration, Knock Every Door sent four people to shadow Fleischer on a post-election canvass about the election outside Los Angeles, and then worked with political scientists to draft a script for their canvasses—the same script that Williams’ canvassers carried with them in Stewart Manor. (Fleischer’s own project is focused on engaging Trump voters’ racial prejudices.)

But Fleischer’s success also carries a lesson for progressives hoping to mimic it. It took years of trial-and-error before he found something that worked on just one issue; Democrats might be screwed if they can’t turn things around in just two years. The script that eventually produced a breakthrough was Fleischer’s 74th attempt. He brings a videographer with him on his rounds and studies the tapes afterwards to figure out what worked and what didn’t. When we met at a coffee shop in Brooklyn, he pulled out a laptop to show me footage of his first two post-election conversations in Los Angeles, and then peppered me with questions. What did I think about the Knock Every Door canvassers? How did it mesh with my conversations with Trump supporters? Fleischer is always canvassing, even when he’s not.

After two hours of door-knocking in Long Island, Williams’ volunteers returned to her dining room, where they sat at a picnic bench comparing notes over Belgian beer and samosas. They confessed to being timid at first. Their conversations had been a far cry from the skillful repartee I’d seen on Fleischer’s laptop. But it hadn’t been a wasted afternoon either. One thing they discovered was that it was the first time in years that any of the people in the neighborhood had been canvassed—even though they live in a congressional district that Democratic Rep. Tom Suozzi won by just 17,000 votes last year.

And while there were plenty of dead-ends—one woman, who had supported Trump, refused to open her door and shouted her responses through the glass—they found the experience as a whole to be encouraging. A man in a Yankees t-shirt, who’d voted for Obama twice before casting his ballot for Trump, confessed that he believed the president would be impeached before his first term was up. One resident, who had supported Hillary Clinton but preferred Joe Biden, invited a canvasser into his home to talk to a half dozen of his friends, including the town’s former mayor.

No one came away feeling as if they’d flipped a voter from one side to another. But they saw value in making the introduction. Adrian Enscoe, a musician from Brooklyn who had never canvassed before, soon made plans to host his own meet-up in Bushwick. “Apparently people just like talking,” he said.