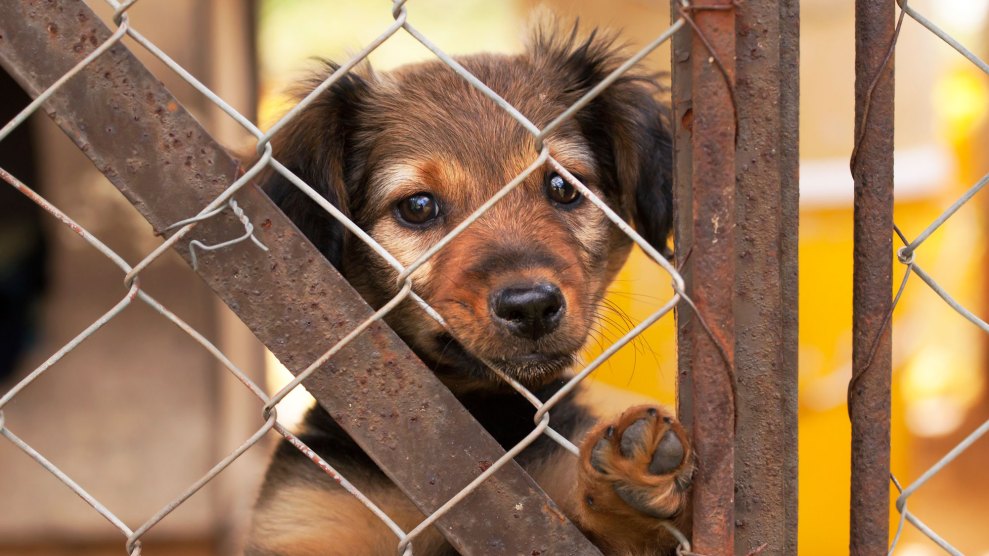 Update March 2, 3:30 p.m. ET: After much backlash from animal advocates and lawmakers, the USDA released a statement on February 17 saying it would again post certain animal welfare reports on its website. Not all previously-scrubbed documents will be available, only those pertaining to certain research and federal facilities inspected by the USDA’s Animal and Plant Health Inspection Services. Records on animal breeders, zoos, and horse trainers are still unavailable.

Since the original purge of documents on February 3, many lawmakers have taken action. More than 100 signed a letter to President Trump, asking him to make sure the reports were reinstated. Representatives in Oregon also proposed a bill that would force the USDA to re-publish all the reports that were removed from the site.

It may have just gotten a lot harder to spot puppy abusers: A section of the US Department of Agriculture’s website that provided documents detailing animal abuse was taken down last Friday, without warning. For more than 10 years, the government agency posted information on violators of the Animal Welfare Act and Horse Protection Act. Citizens, journalists, and animal advocacy organizations like the Humane Society relied on these reports to identify zoos, animal research labs, horse breeders, and dog breeders who violated the laws.

The USDA said in a statement last week that it had taken action after conducting a review of the types of information it posts, and stated that it is committed to the “privacy of individuals with whom we come into contact.” The agency said people will now have to file Freedom of Information Act requests to obtain the same information, though this process can take many months, if not years.

“Here we have a government action that benefits no one except people who are caught abusing animals and don’t want the public to know,” said the Humane Society’s John Goodwin.

The Humane Society says three of its campaigns will be deeply affected by the change. John Goodwin, the senior director of the organization’s Stop Puppy Mill campaign, uses the reports to create the Horrible Hundred—a list of “puppy mills,” or producers who breed large numbers of dogs in unsanitary conditions. “Here we have a government action that benefits no one except people who are caught abusing animals and don’t want the public to know,” Goodwin said.

Marty Irby, a senior director of the Humane Society’s Rural Outreach and Equine Protection, likened the reports to the Department of Justice’s public information on sex offenders. “If your neighbor severely abuses a dog who is kept in a cage for breeding purposes and gets caught,” he said, now “that person is going to be protected.” Irby added that the USDA reports provided an easily accessible resource for people looking to buy or show horses. Now, he argues, violators of the Horse Protection Act can more easily hide.

The USDA’s Animal and Plant Health Inspection Service stated that a review of this process has been going on for a year and cited the Privacy Act as a reason for removing the information. Yet the decision came at a time when people are paying extra attention to how Trump’s USDA will differ from his predecessor’s. As my colleague Tom Philpott reported last December, Brian Klippenstein, the leader of Trump’s USDA transition team, lobbied against Humane Society-backed initiatives in Massachusetts that would curb the use of pig gestation stalls and chicken cages in the state. Before he was appointed to the transition team, Klippenstein was the executive director of Protect the Harvest, a nonprofit that aims to “inform America’s consumers, businesses, and decision-makers about the threats posed by animal rights groups and anti-farming extremists.” The group makes its feelings about the Humane Society clear on its website, dubbing the organization a “fake charity” and claiming it wants to put breeders out of business by heavily regulating them.

Klippenstein stepped down as executive director of Protect the Harvest in December. A spokeswoman for the nonprofit told Mother Jones that while it had no involvement in the USDA’s decision to remove the reports, the nonprofit is “concerned about the privacy of people who obey the law” and that “all government agencies should be protecting the privacy of people who submit compelling information.” She later called back to say that Protect the Harvest has no position on the issue.

It’s still unclear whether the removal of the information on the USDA website is a permanent change. In the meantime, this isn’t just bad news for animal welfare advocates. Since 2011, pet store owners in seven states have been required to source puppies from companies that have no USDA violations. Without these reports, business owners will have a tougher time knowing whether their suppliers violate anti-puppy mill laws.

Investigative reporters have referenced the USDA’s documents to uncover and report on animal abuse in the past. Mother Jones senior editor James West used nearly 1,000 USDA documents to investigate severe animal negligence at a roadside zoo in Maine. The zoo owners were subjects of Yankee Jungle, a reality show on Animal Planet that was canceled after MoJo published West’s story.

The Humane Society of the United States filed legal action against the USDA on Monday. Goodwin said the organization plans to fight the USDA’s decision “all the way.” “The USDA has a lot to explain for denying public access to this information,” he said.