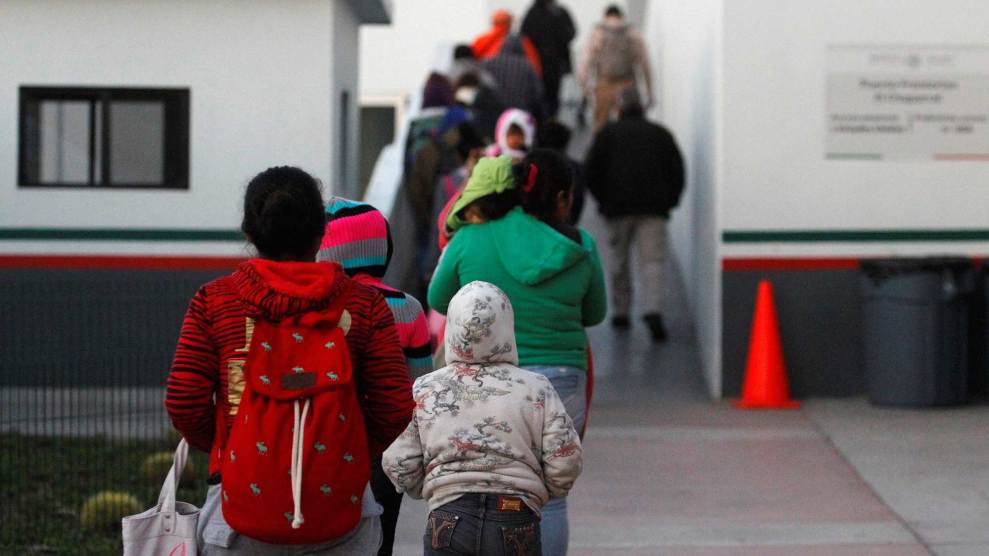 Despite President Donald Trump’s dire warnings of “bad hombres” and drugs flooding into the United States from Mexico, the most urgent issue along the border has been the influx of Central American families and unaccompanied children, many of whom are fleeing gang-fueled violence in their home countries. And the latest statistics from the border show that one of the main goals of the White House’s immigration crackdown is being realized: targeting and deterring these asylum seekers from heading to the United States in the first place.

Last week, the Department of Homeland Security (DHS) released new data on the number of migrants stopped at the US-Mexico border in February. Customs and Border Protection caught 18,762 people trying to enter the country, a 40 percent drop from January and the lowest monthly total since at least 2000 (the earliest year for which there are statistics). Of those migrants, just 27 percent were unaccompanied children or family groups, typically women traveling with kids—a huge dropoff from the last three months of 2016, when they made up 48 percent of apprehensions at the border.

The administration was quick to celebrate the numbers. In a statement, Homeland Security Secretary John Kelly crowed, “The early results show that enforcement matters, deterrence matters, and that comprehensive immigration enforcement can make an impact.” But immigration advocates caution that Trump’s border enforcement ramp-up—like earlier attempts by the Obama administration to stem the flow of Central American migrants—could be particularly devastating for thousands of women and children from El Salvador, Guatemala, and Honduras hoping to claim asylum in the United States.

“I think what we’ve seen over the past three years is that you can’t enforce away a refugee crisis,” says Jen Podkul, the director of policy at Kids in Need of Defense (KIND), a legal aid nonprofit for unaccompanied child migrants and refugees. “Unfortunately, these executive orders and memos are going to push everybody underground.”

Katharina Obser, a senior program officer at the Women’s Refugee Commission (WRC), says she’s interviewed countless women in family detention over the past few years. “When we ask them, ‘Knowing what you know and given what’s happened, would you make the decision to leave again?’ The answer is almost always, ‘Yes, I had no other choice…’ There continues to be a lack of recognition that these are asylum seekers who are fleeing very real harm and who should have access to a fair and just immigration system.”

Here are seven ways that the White House has gone about squeezing Central American refugees:

1. Shutting down a safe path for kids

In September 2014, after the huge numbers of Central Americans at the southern border became national news, the Obama administration approved a plan to allow a select group of kids from El Salvador, Guatemala, and Honduras apply for refugee status from within their home countries. The initiative was meant to keep the most vulnerable people from embarking on the dangerous journey north. Though the Central American Minors Refugee/Parole Program was slow to get off the ground, the New York Times reported that 11,000-plus people have applied to the program, with a little more than 2,400 gaining admittance by late February—including 316 during Trump’s first month in office.

“Unfortunately, these executive orders and memos are going to push everybody underground.”

Trump’s revised travel ban, however, put the Central American Minors program on ice. In his March 6 executive order, the president suspended all refugee admissions for four months and cut the number of refugees the United States will admit annually to 50,000, down from 110,000 under Obama. And while a federal judge has issued a temporary restraining order on the ban, the CAM program’s future remains cloudy. In his February executive order on border security, Trump pointed a finger at “the abuse of parole and asylum provisions” that can allow immigrants without valid asylum claims into the United States.

2. Turning away asylum seekers at the border

In mid-January, eight immigrant rights organizations sent a complaint to DHS claiming that Border Patrol agents were turning away immigrants seeking asylum at the US-Mexico border. Under federal and international law, the United States must screen people asking for asylum to see if they have a credible fear of persecution in their home countries. If they do, they can get a full hearing in front of an immigration judge. (If they don’t, they can be summarily deported.) According to the complaint, Border Patrol agents in Texas and California had told migrants that they weren’t accepting more people and wouldn’t allow them to meet with asylum officers to file claims.

The incidents mentioned in the complaint began last summer. In one case, a Mexican police officer in a wheelchair was allegedly denied entry several times near San Diego, despite claiming he had been targeted and beaten by a drug cartel. Advocates say the situation could become untenable. “These northern Mexican border towns are so dangerous as it is,” Podkul says. “If there are just vulnerable migrants sitting around, they’re just waiting for something to happen to them.”

3. Threatening to separate moms and children

Earlier this month, Reuters reported that the Trump administration was considering separating migrant mothers from their children upon entry into the United States. Instead of detaining them together, or letting them go while they await a hearing in immigration court, federal agents could split them up—sending moms to detention and kids to government-run shelters.

Following the border crisis in 2014, women traveling with children were detained in special family detention centers that were criticized by attorneys and immigrant rights groups for their poor conditions. Last December, around 400 women and children were released from family detention facilities in Texas after a judge denied the centers the necessary state licenses for detaining kids. Separating moms from their children could get around the problem of holding kids in substandard centers and needing to build more facilities to accommodate families.

In an interview with CNN’s Wolf Blitzer on March 7, DHS Secretary Kelly confirmed the Reuters report: “Yes, I am considering it, in order to deter more movement along this terribly dangerous network.” Kelly later said he thought parents who brought their children across the border are manipulating the system “because they know up till this point we will keep the families together.” “As this word gets out that we’re considering it and maybe we’ll implement it,” he said, “that will add again to this factor of people not coming.”

Refugees who do manage to meet with an asylum officer may now face a tougher screening than they would have in the recent past. In mid-February, DHS updated the lesson plans it uses to train asylum officers on handling “credible-fear” interviews. According to the Tahirih Justice Center, a nonprofit group that provides legal services for women and girls fleeing gender-based violence, the changes include increasing the burden of proof on asylum seekers at a very early stage in the process—when many are particularly vulnerable and often do not have a lawyer.

Kelly said parents who bring children across the border are manipulating the system “because they know up till this point we will keep the families together.”

The lesson plans have also dropped language emphasizing the low threshold for passing the credible-fear interview. For example, earlier lesson plans included passages reminding officers that when there was a reasonable doubt regarding an asylum seeker’s fear of persecution in her home country, “the applicant likely merits” a full hearing before a judge. “The credible-fear process was always intended to be an intentionally low threshold,” the WRC’s Obser says. “It was not meant to be a full-blown asylum hearing.”

The feds used to have several options for dealing with asylum seekers who have passed their credible-fear interviews. They could release them on a written promise to appear at an immigration hearing, they could let them go with an ankle monitor, or they could detain them. Over the last several years, many immigrant families with pending asylum claims were set free, a policy that immigration hardliners have derisively called “catch and release.” During his campaign, Trump promised to end this practice, and his executive order on border security called for detaining every immigrant caught at the border.

To that end, ICE has suggested doubling the number of immigrants it can detain on a daily basis to 80,000. With detention facilities already near capacity, that could mean working with local governments to reopen empty state prisons or even renting beds in local jails. Meanwhile, a February memo from DHS Secretary Kelly says that asylum seekers may be released if they pass their credible-fear interviews and prove to ICE who they are and that they’re not a security risk. If not, they face prolonged detention—and, because it’s especially hard for them to find lawyers and make their cases while held by ICE, likely deportation.

6. Getting tough on unaccompanied kids

According to Kelly’s memo, some 155,000 unaccompanied child migrants have been apprehended at the border in the past three years. Those kids pass through shelters run by the Department of Health and Human Services and are often then reunited with relatives living in the United States. Kelly wrote that 60 percent of them have been placed in the care of one or more undocumented parents. The memo suggests that the government will be taking a closer look at these cases and reclassifying unaccompanied kids as simply undocumented immigrants—and deporting them.

“No person is more concerned about the safety of a child than a parent. They’re doing the only thing they know how to do to save their child’s life.”

KIND’s Podkul argues this will simply keep parents from collecting their children from government shelters, which could put kids in precarious situations—and could keep the federal government from being able to know where kids are and make sure they’re living in safe environments. “You’re either going to have kids lingering in detention,” she says, “or you’re going to have a stranger or a family friend or a neighbor who comes forward to get the kid.”

Many of the unaccompanied children reuniting with their families in the United States arrive at the border with the help of smugglers hired by their parents or relatives. “Regardless of the desires for family reunion, or conditions in other countries,” Kelly wrote in his memo, “the smuggling or trafficking of alien children is intolerable.” To that end, Kelly states that anyone who contributes “directly or indirectly” to the smuggling of a child could face deportation or criminal prosecution.